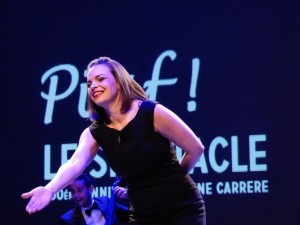 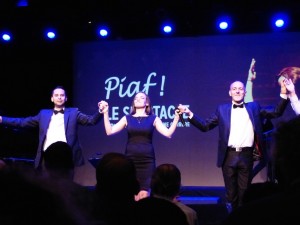 “Whatever happens, regret nothing.” With this theme stamping the image of Edith Piaf, chanteuse Anne Carrere, brought to Symphony Space her homage to the legendary voice of France. In an international tour, Piaf! The Show, Carrere’s spotlight was always Piaf, impassioned, emotional, with a voice amazingly strong with a trademark vibrato. Carrere’s respect and knowledge of Edith Piaf was evident, fiercely inhabiting the songs she made popular.

Physically, Carrere resembles a healthier, more robust Piaf, who was diminutive and called “La Mome” (the “Little Sparrow”). Vocally, Carrere’s renditions and vocals are quite reminiscent, though not as raw and melodramatically personal as those of Piaf. Piaf, the immensely popular singer in the 1940s and ’50s, was born into poverty, plagued with illnesses, accidents, addictions and the anguish of love gone bad. However, she had another side, a love for fun, laughter and, as newspaper headlines proved, she had a healthy sexual appetite. Carrere brought the vibrant Piaf spirit and her world to the stage.

Piaf! The Show traces her life with no narration. It needs no words, the music tells it all. In Act One, the early years, Piaf is seen and heard working in a small Pigalle bistro and strolling the city that she loved. Carrere appears on a small simple club setting with four musicians on piano, accordion, bass and percussion. On the screen behind them, projections illustrate French streets in those early years, photos of Piaf and some of the numerous men in her life including Yves Montand and Charles Aznavour. Meanwhile, Carrere danced, twirled and strutted across the stage with French songs like, “La Goualante du Pauvre Jean” (“The Ballad of Poor John”). (The misleading version that came later to the U.S., “The Poor People of Paris,” is one of the many examples of erroneous translations. The original French version takes a bitter look at a love affair).

After the intermission, the show evolves into “le spectacle” with Carrere front and center wearing the trademark black dress and singing her hit songs, like “Autumn Leaves,” another example of misleading translation. The high point of the show is evident with photos of her great love for middleweight boxing champion, Marcel Cerdan. When he tragically died, Carrere delved into heartfelt renditions of “Mon Dieu” and “Hymne a l’Amour.” To follow, she stepped up with the crowd-pleaser, “La Vie En Rose,” moving into the audience, inviting a man to join her in a few dance steps. Second time around, she challenged the audience to sing along — in French — with the words projected on the screen. She rounded out Piaf’s life with “Non, Je Ne Regrette Rien.”

For the encore, Carrere urged another audience member to join her on stage for a theatrical delivery of “Milord.”

Originally called Piaf! Le Spectacle, this tribute was produced by Gil Marsalla and Direct Productions as part of an international 100th anniversary tour celebrating Edith Piaf’s birthday. It was renamed Piaf! The Show for Symphony Space and runs in two 45 minute acts with intermission.

Symphony Space in 2015 is not only about the anniversaries of Frank Sinatra and Edith Piaf, but a tribute to the legendary space built by Vncent Astor 100 years ago, home over legions of various performances. It began life as an indoor market but later became an ice skating rink, then a movie theater before evolving into a venue for theater, music, concerts and discussions.