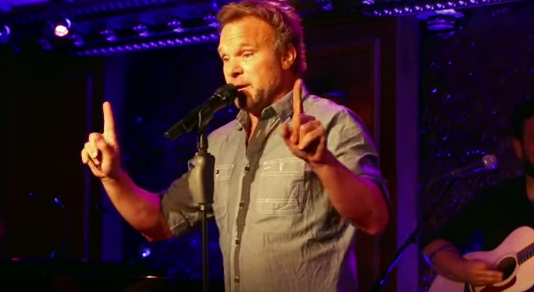 Two-time Tony Award winner Norbert Leo Butz is back with his favorite Rock ‘n’ Roll playlist and a new perspective. A father with three daughters, three sisters, nine sister in-laws and more, he finds himself at this stage of life “inundated with the feminine.” In an effort to explore life’s great dualism of the sexes, Mr. Butz finds answers as only he can: by singing the crap out of his favorite rock anthems on women and intersticing them with lessons from the classic Greek and Roman goddesses of fame and their Carl Jungian personality archetypes. Trust me, it’s just as cool as it sounds.

Leading in with “Yoshimi Battles the Pink Robots, Part 1” (The Flaming Lips), it quickly becomes clear that there will be no punches held this evening. The high energy tune runs like a jolt through the band, which is coupled with some of the most complex and well-executed lighting design I’ve yet to see at a show of it’s likeness at this venue. Moving on, the story of Athena takes us into “Mrs. Leroy Brown (Loretta Lynn). Norbert Leo Butz’s bulldozer voice hits like a wave of rock, and his willingness to jump around the stage like a star makes you feel like you’re at an arena.

“In This Heart” (Sinead O’Connor) is introduced with story of Demeter and her daughter, Persephone. The tale of a daughter’s abuse and a mother’s mourning flow through Butz’s song, and his tender lullaby is received like a father to their child. Seamlessly transitioning to “Tecumseh Valley,” he plays acoustic guitar alongside the band naturally.

Under the music direction of Michael J. Mortiz Jr. (Piano), James Leahey (Guitar), Billy LaGuardia (Guitar), Adam DeAscentis (Bass), and Khaled Tabbara (Drums) give the simple ingredient that – without it – can totally kill a show like this: they rock. Their ability to keep up with the pace of Butz’s stories, quick transitions, and a willingness to let loose make all the difference. Turning it up to 11 helps, too.

The title character of “Come on Eileen” (Dexys Midnight Runners) is NLB’s favorite maiden of rock, and it shows. With belted notes that could take the paint off an old Chevrolet, the arrangement tests the limits of Feinstein’s/54Below’s legal rock levels. Wrapping up the night with “Wig in a Box” (Stephen Trask), Butz cites his desire for a future with no gender (or at least discrimination).

Norbert Leo Butz could sing the phone book and sell tickets, and in this case, his obvious (even self-indulgent) love of the source material is really something to see.