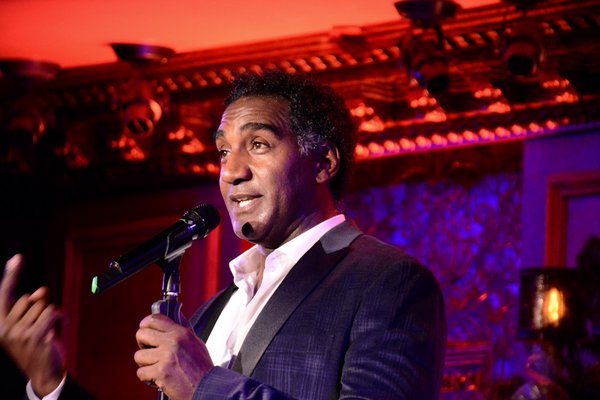 Norm Lewis is full of charm, sex appeal and tremendous talent, making his third Feinstein’s/54 Below Christmas appearance yet another career triumph – among many. Lewis has the capacity, by sheer force of a wonderful personality, to reach out, draw in and hold transfixed just about anyone in his line of sight. This year’s first-rate show is a mix of moods, from the light-hearted to serious to reverent and back again. The opening, jazzy, upbeat “This Christmas” led into an amusing turn on “Santa Baby,” with Lewis mugging his way through a conversation with Kris Kringle himself. Right off the bat it’s easy to figure out Lewis is the real deal – a genuinely nice guy.

Lewis’ narrative is conversational, with plenty of references to growing up in Central Florida. Amazingly he didn’t even consider a career in show business until his mid 20s, when the Universe, in the way that these things often happen, decided otherwise. He only discovered Broadway as a teen, beautifully singing his then favorite number, “Home” (a tune actually written by a very, very young Larry Kerchner and sold to the producers of The Wiz). Lewis’ rendition pops the lyric, a feat typical of his ability to tell the story of a song through intelligent vocal dynamics, a real understanding of its meaning and excellent acting ability. He applies these skills especially on the ballads “Where Is Love?” and “The Gift of Love.” The reverential side of Lewis and his church upbringing is reflected in a heartfelt duo of songs, a jazzy “What Child Is This” and a blues-based “Mary, Did You Know.” Guest artists for this particular show were the husband and wife team of Jarrod Spector and Kelli Barrett, who performed a rock medley (“Going to the Chapel”/”Be My Baby”/Dedicated to the One I Love” and more) with Lewis, in comic mode, as a back-up singer. On their own, the duo sang an affecting “Some Day at Christmas.” Then a more serious turn to Santa Baby! comes in the second half of the show. As has been the wont of many a performer in this last year, Lewis addresses the anxiety felt by many over the current political climate and distressing world events. He sings a powerful, emotional and very pointed “What’s Going On” followed by the prayer of “Peace on Earth.” As a dedication to friends who have passed, he sings “Old Friends” in memory of Barbara Cook, and for the man who played the Phantom in Los Angeles, Robert Guillaume, “Music of the Night.” Lewis, himself, made musical theatre history as the first African-American actor to perform in the title role in Broadway’s long-running production. If there is one flaw in Santa Baby! it’s in the dispensing of two gift bags to selected audience members, which seemed surprisingly offhand. A lot more could have been made of this part of the show. Still, there was a fun audience participation segment, a sing-along of “Caroling, Caroling,” with song sheets distributed by director Richard Jay-Alexander. Alexander is a hands-on kind of guy, and the result of his creative investment is evident in the overall good-time feeling of Santa Baby! Musical excellence is provided by the trio of bassist George Farmer and percussionist Perry Cavari, with the hugely talented pianist Joseph Joubert as Musical Director.

Singing a tune he reports he’s never tackled before, Lewis ends with a soft and gentle “White Christmas.” Slyly he reaches into his jacket pocket and sprinkles “snow” here and there. It might well have been fairy dust. There’s no doubt Lewis – a cheerleader for positivity and good times – weaves a magical spell in Santa Baby!