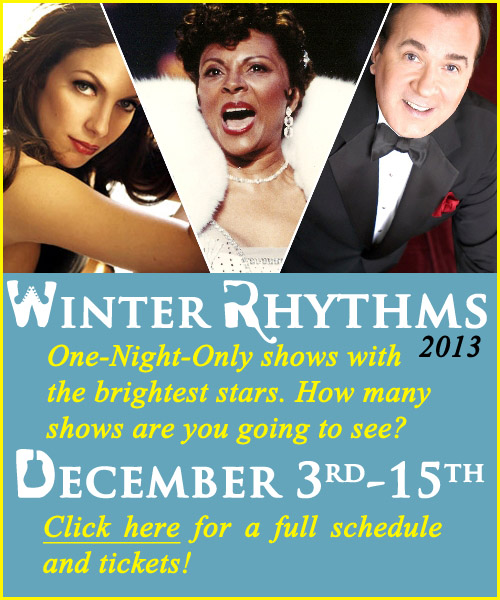 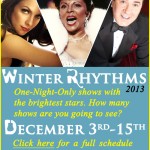 Winter Rhythms 2013 marks the fifth year that Urban Stages has brought noted musical artists to its stage during the holiday season. This critically acclaimed series, produced by Peter Napolitano, raises money to fund Urban Stages’ On Tour Outreach Program, bringing over 300 free “arts in education” presentations yearly to libraries and schools throughout the five boroughs. It runs until December 15th.

I saw Noteworthy—Excerpts from New Musicals Wednesday December 4th.  There were two musical offerings. Andy Monroe, the recipient of a Jonathan Larson grant and the composer of the musical The Kid (2010 Outer Critics Circle Award winner and the 2009 BMI Foundation Jerry Bock Award recipient), brought four very talented performers to sing a selection of songs from his shows. Each singer had a knockout moment. Kevin Dozier was both revealing and charming, and completely in gorgeous voice in the song Okay. James Cochran was involved in what seemed like a whole world of explaining about how he likes girls while getting sidelined into lush descriptions of boys—very finely drawn and very funny in the song I Like Girls. Courtney Shaw was in full ingénue dudgeon singing about her love of the romantic Grand Gesture. And Raissa Katona Bennett created a full and beautifully expressive portrait of finding new love in the midst of an unhappy marriage in the song He opened a Door for Me.

Greg Edwards (lyricist) and Ben Green (composer) brought four topnotch performers and 12 songs from their new show Neurosis about a guy and his best buddy Neurosis. And, of course, his new girlfriend comes complete with her own neurosis (Alexandrea Tocco). Danny Gardner plays the main character Frank, not only with engaging enthusiasm but with as much physical comedy as a reading will allow. His Neurosis is subtlety and slyly played by Joseph Medeiros. Abby the love interest (Patricia Noonan) describes her perfect mate in the song When I Find a Jewish Boy which of course Frank is—so we’re off and running. Frank gets therapy (Being in the Moment), Abby gets a pep talk from her neurosis (Baby You Got What It Takes—Mostly). They meet the parents, break up; the two neuroses have a duet and then go to therapy together. Everybody gets back together and we embrace the human condition in the song Rock Your Neurosis. This was a promising look at a new musical—witty and fun.