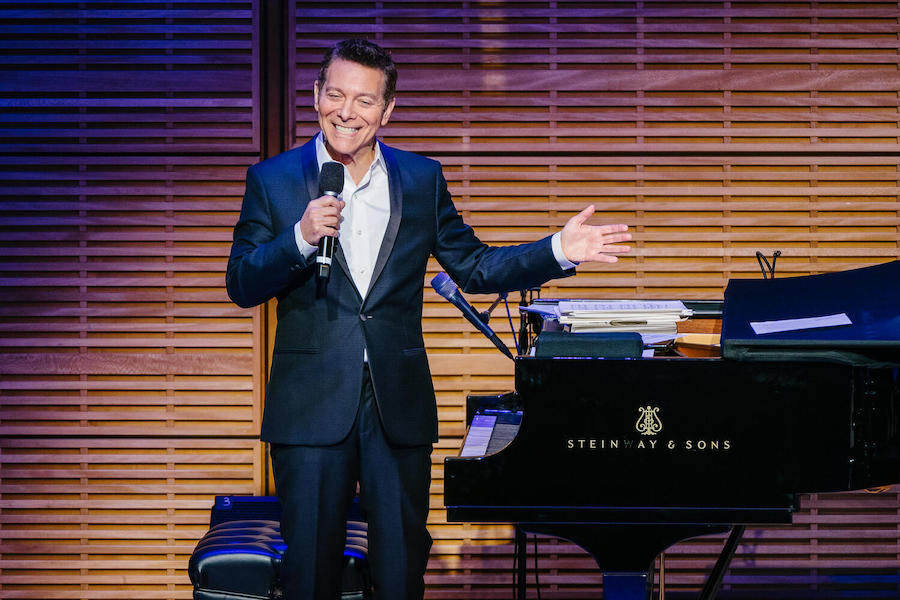 If the golden opportunity arises to see the definitive keeper of the torch of the Great American Songbook, you never want to miss the chance, especially if the show centers around the Ultimate Sinatra. On November 16th , the always boyishly, young and good looking Michael Feinstein took the stage at Carnegie Hall’s Zankel Hall for an evening of pure pleasure of stories, history and the eminent songs of the great Frank Sinatra.

Sinatra’s oeuvre of musical wonders spans eras that include all the marvelous songwriters who contributed to our musical history. From Rodgers and Hart (“Lady is a Tramp”) where Richard Rodgers was seemingly unhappy with changes Sinatra would apply to songs (until he got his first royalty check) as opposed to Sammy Cahn who encouraged and loved those creative changes only to make a song better.

Sinatra’s favorite songwriter was Cole Porter who, when first hearing Sinatra sing, knew he heard greatness. And Porter, was/is by far, one of our definitive songwriters brought to life by the unequaled Michael Feinstein swinging “At Long Last Love” with a series of clever lyrics moving on to Isham Jones/Gus Kahn’s bluesy ballad “The One I Love Belongs to Somebody Else.”  Back in the day of Fred Astaire who sang uptempo  Boogie Woogie style, it was Sinatra who reimagined Harold Arlen/Johnny Mercer’s “One For My Baby” (inspired by Judy Garland) making it one of the world’s best saloon songs which, in the supple vocals of Feinstein (in great voice) was a big winner. Add on Ruby Bloom/Johnny Mercer’s “Day in, Day Out” swing-style.

Other historical tidbits included how Bing Crosby (at the height of his career) felt challenged when Sinatra came on the scene saying “A guy like Sinatra comes once in a lifetime . . . why did he have to come along in mine” as Feinstein moved into the foggy, sexy and sensual sounding “The Second Time Around” (including a notable piano solo from Tedd Firth).

The top 10 American Songbook Canon includes Dorothy Fields and Jerome Kern’s “ The Way You Look Tonight” with an updated Alan Broadbent arrangement for Michael Feinstein from ballad to slow swing. Even Alec Wilder (a prickly human being we’re told) would continuously rewrite his songs for Sinatra’s approval such as “I’ll Be Around” which Feinstein offered with slow pathos and velvety smooth emotions.

Not to forget the top musicians who filled the stage were the fluent, flying fingers of the great Tedd Firth on piano, with David Finck on bass and the illustrious Mark McLean on drums.

During the evening, Michael Feinstein would be back sitting at the piano for some funny moments like a take-off on Liberace, Carol Channing and Peter Laurie voices. As we know, he has a great sense of humor and it’s always nice to see that silly, funny, clever side, that special twinkle in his eye. But when he gets musically serious, it’s manna to the ear . . . “ All My Tomorrows ”/”All the Way,” “Where Do I Start?” . . . His voice ebbs and flows – soft and silky, emotions pouring to the surface.

The evening moved along all too quickly with songs by Burton Lane from Babes on Broadway including “Anything Can Happen in New York”/ “How About You” followed by the ultimate compendium Sinatra Medley (about a dozen songs) including . . . “Come Fly With Me” / “ World on a String” / “All or Nothing at All” / “Angel Eyes” / “That’s Life”/ “Night and Day” with an encore of “Young at Heart.”

What’s left to say? Nothing much when your heart swells and sings in a blissful state of musical wonder. You’ll have two added chances to experience Standard Time with Michael Feinstein at Zankel Hall: February 15th and March 29th.  Stay tuned!