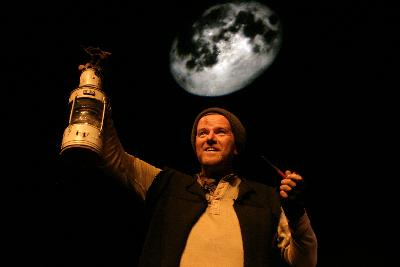 On Monday March 14, Aidan Dooley’s tour de force one-man portrayal of the overlooked Antarctic explorer Tom Crean will be presented at the New York Irish Center for the first time.  The multi-award-winning show performs on Mon Mar 14 at 7pm, part of the Center’s week-long St Patrick’s Day celebration.  For tickets, which are $25, visit www.newyorkirishcenter.org

Dooley’s riveting and acclaimed solo performance, which has been hailed as an “unparalleled portrayal” by the NY Times, has toured internationally, with runs in Ireland, Australia, the UK and key cities in Europe and the US. Crean (1877 to 1938) was one of the few men to serve with both Scott and Shackleton, and survive the three famous expeditions: Discovery (1901 – 1904); Terra Nova (1910– 1913); and Endurance (1914 – 1916).

Later the same week, on St Patrick’s Day, March 17, NYIC stages hosts a six-hour-long, post-parade celebration, “40 Shades of Green,” running from 3pm to 9pm, that will include music, dance, and joyous mingling with some of the most talented and prominent people in our community.  During this time, in the Center’s newly remodeled storefront theater, The Reilly Room, a continuous cavalcade of notable performers will take the stage for concise sets: Confirmed performers (offering a bounty of musical styles from jazz, Trad, pop, Broadway and country & Western) include Gregory Harrington, Eoin Cannon, Rachel Tucker, Tara O’Grady & Justin Poindexter, Grace Tallon, Peter Maguire, Colm Reilly, Cathy Maguire, the Josh Marcum Trio, Sean O’Neill, Connor Delves, Darrah Carr Dance, Brendan Fogarty, Kieran McCarthy, Fiona Walsh and Mary Deady.  Also featured are the standout teenage performers Ciara Duff and Ailish Long, as well as young and teenage performers from the McManus School of Irish Dance.  Emcees for the day are Amy Brett, Fiona Walsh and George C. Heslin. For “40 Shades of Green” Day Pass tickets, which are $20 and good for all events from 3pm to 9pm (including the continuous music in the Reilly Room), visit www.newyorkirishcenter.org

Kicking off St Patrick’s Day week are the beloved all-sister pop-folk band Screaming Orphans, in their first New York City appearance since the fall of 2019.  Only a few tickets remain for the one-night only appearance on Thursday March 10 at 7pm.  Known for combining original songs and a contemporary sound with traditional Irish folk, the genre-busting, chart-topping Diver sisters are currently promoting their new album, “Sunshine and Moss,” created during COVID and released in August 2020.  Tickets for this “Ireland Live… From New York” seated concert in the Center’s newly remodeled storefront theater, The Reilly Room, are just $25.  For tickets visit www.newyorkirishcenter.org