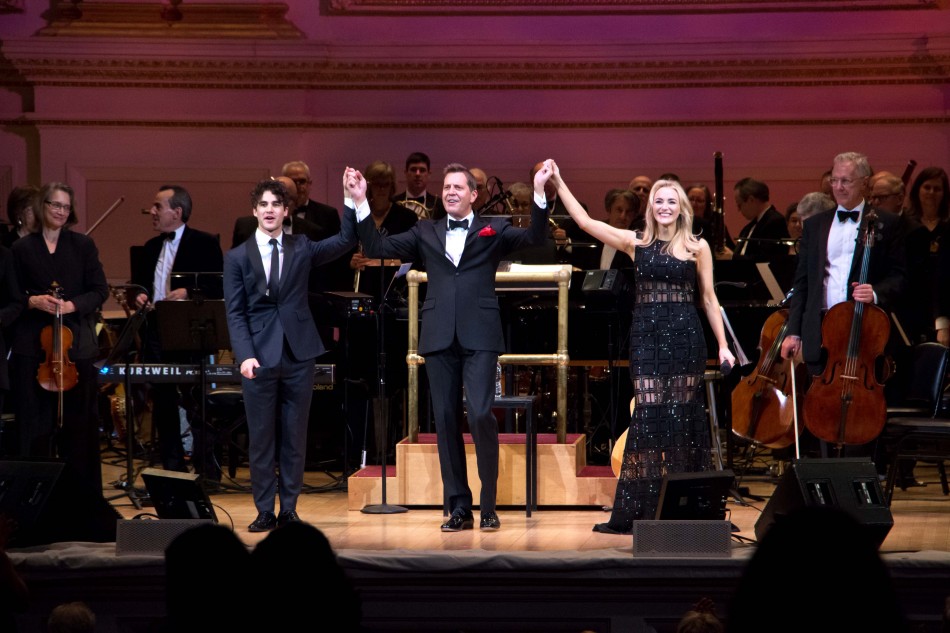 On Friday evening, March 11, Carnegie Hall was packed with fans for a terrific concert of contemporary theater showstoppers performed by The New York Pops entitled 42nd on 57th Broadway Today featuring two wonderful singers Darren Criss and Betsy Wolfe. This is the 33rd season of The New York Pops conducted by the charming and dynamic Steven Reineke who surprised the audience by singing a duet with Darren Criss “You and Me (But Mostly Me)” from The Book of Mormon. Another treat was bringing composer Robert Lopez to the stage who played for them from his score for that show. He also accompanied Betsy Wolfe on the mega hit “Let It Go” from Frozen, the film that won the 2014 Academy Award for Best Song and is scheduled to become a Disney Broadway show in 2017.

Although most Broadway shows have live orchestras, nothing can compare to the scope and number of musicians in the NY Pops. The concert opened with selections from Andrew Lloyd Weber’s The Phantom of the Opera and it was just thrilling. Composer Jason Robert Brown was represented with the clever song from Honeymoon in Vegas “I Love Betsy,” beautifully performed by Darren. It was the perfect way to introduce Betsy Wolfe to the stage who triumphed on the difficult “Getting Married Today,” from Company by Stephen Sondheim.

Another surprise was introducing Jason Robert Brown who sat at the piano and played for Betsy when she sang “A Summer in Ohio” from The Last Five Years. He also accompanied Darren and Betsy on the lovely duet “Before and After You/One Second and a Millions Miles,” from his Tony Award winning score of The Bridges of Madison Country. William Finn’s “I’d Rather Be Sailing,” from A New Brain, was performed by the talented Darren who accompanied himself on the piano showing that he is not only a great singer, but also a fine musician.

Nothing can be more exciting than hearing excerpts from the hit Les Miserables played by a huge orchestra, as the score almost requires this grandeur. The New York Pops arrangement by Steven Reineke couldn’t be more uplifting as Darren sang, “I Dreamed a Dream” and The Pops performed a medley of “At the End of the Day/Do You Hear the People Sing?” –  it was very powerful. Lyricist Alain Boubilil was sitting in the audience and was introduced by Steven who mentioned that Boubilil is being honored at the NY Pops Gala on May 2. Some of the other composers represented were Stephen Flaherty & Lynn Ahrens (Ragtime), Alan Menken & Howard Ashman (Little Shop of Horrors), Kander & Ebb (Chicago, Cabaret), Maury Yeston (Nine), Glen Hansard & Market Irglova (Once), and Stephen Schwartz (The Baker’s Wife).

The Pops never fails to delight and seeing these concerts at Carnegie Hall is the ultimate New York experience. So don’t delay and get your tickets now for the next concert on Friday, April 8 to see “Lights, Camera, Action: Spielberg and Williams” – a Tribute to the legendary collaboration between Academy Award winners Steven Spielberg and John Williams.