NY POPS-Back Home for the Holidays 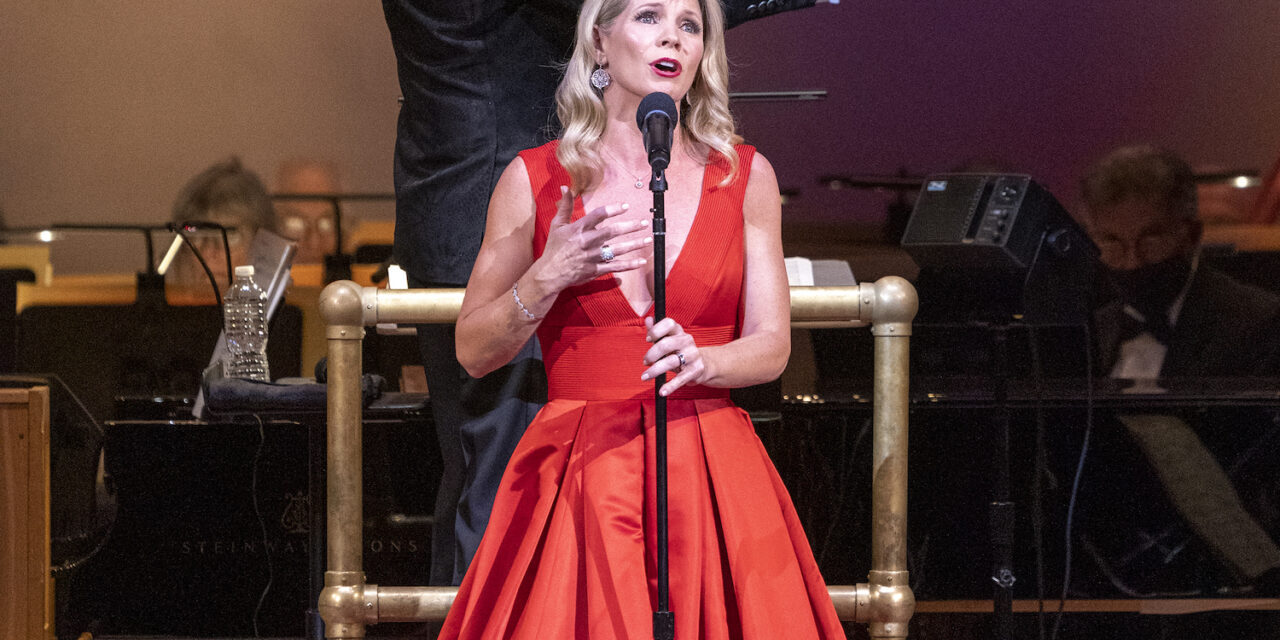 Like many artists who’ve found themselves on stage live again after a punishing pandemic lockdown, Steven Reineke, music director and conductor of the New York Pops, was bursting with glee. In the aptly named, Back Home for the Holidays, the maestro, on behalf of the orchestra, welcomed all, once again, to Carnegie Hall and the Stern Auditorium/Perelman Stage. And so, for two hours, the weary world rejoiced—at least within the concert hall—as a festive spirit prevailed. In Carnegie Hall’s unparalleled acoustics, the 78 A-level musicians, who comprise the Pops, showed not a trace of the stress of isolation. The opening medley of holiday favorites loudly and beautifully proclaimed that the sharp, precision playing of these masters had prevailed. It was a glorious sound in a glorious evening of celebration.

Adding a special, nonpareil addition to the evening was Tony-winner and star of stage and screen, Kelli O’Hara. Several days before the concert, scheduled guest artist, Laura Benanti, was forced to withdraw because of exposure to Covid-19—a reminder that as far as the pandemic goes, we’re not out of the woods by a long shot. O’Hara, a good friend of Benanti’s, stepped in. She disclosed that the first of her four exquisite evening dresses, a stunning red ball gown, was, in fact, Benanti’s, sent to her for the occasion. Lightening the seriousness of the last-minute replacement, O’Hara quipped on the old vaudeville joke, “how do you get to Carnegie Hall?” In this instance, the answer was not, “practice, practice,” but “replace Laura Benanti.” Said with love and finesse, we all got it, and of course, we well know “the show must go on.”

During the first act of Back Home for the Holidays, O’Hara made two appearances, with a genial Reineke making his own witticism of “Kelli Saves Christmas.” Indeed, she seemed to personify the Christmas and holiday spirit. Her strengths are many; O’Hara is a charismatic stage presence of good cheer, positivity and authenticity. It’s easy to imagine meeting her for holiday tea and having a grand time. And then there’s the voice—an instrument of flexible range, as clear as crystal and brimming with light. Demonstrating her ability for nuance and interpretation, she sang the story carol, “I Wonder As I Wander” (John Jacob Niles), splendidly. Likewise, with “A Place Called Home” (Alan Menken, Lynn Ahrens) she delivered the song with sensitivity. On a fun tune, “Man with the Bag” (Irving Taylor, Dudley Brooks), O’Hara and the Pops swung it with lots of jazzy overtones.

Jazz stylings were a welcome feature to the Pops offerings during Back Home for the Holidays. A strong component of the Pops success is not only virtuosic playing, but the inventiveness of the musical arrangements by Reineke and others. (it’s also fun to watch Reineke conduct—he’s an energetic, enthusiastic master of the baton who puts his whole being into the job). Those jazzy influences appeared in “I Saw Three Ships” (traditional) in a sophisticated new arrangement by Matthew Jackfert, as well as Reineke’s arrangement of “Jingle Bell Rock” (Joseph Carleton Beal, James Ross Boothe). Other highlights of a superb palette of music included a rousing, fun version of “Sleigh Ride,” by Leroy Anderson, a master of including sound effects in his compositions, and a magical “Carol of the Bells” (Mykola Leontovich) that sounded as if it could be ringing through the halls of Hogwarts School of Witchcraft and Wizardry.

In act two of Back Home for the Holidays, O’Hara paid homage to friend and mentor, the late Barbara Cooke, also noted for her sublime operatic soprano, with that diva’s arrangement of “The Christmas Song” (Mel Torme, Robert Wells). She also brought on her guest, Brandon Michael Nase (originally scheduled to sing with Benanti). The two dueted on a sweet “Count Your Blessings (Instead of Sheep)” – Irving Berlin), while Nase demonstrated his lively tenor on “This Christmas” (Donny Hathaway, Nadine McKinnor). At the concert’s conclusion, it was with a glorious “O Holy Night” (Adolph Adam, John Sullivan Dwight) that O’Hara demonstrated vocal range and flexibility with a delivery that seemed sheerly other-worldly. Her rendition of the carol was a literal showstopper, yielding to a spontaneous, prolonged standing ovation. And then, in an encore that seemed just right, given the reality of a world still in struggle, all hands offered a gentle, beautiful “Auld Lang Syne” (traditional)—concluding an evening of much-needed and breathtaking sublimity.