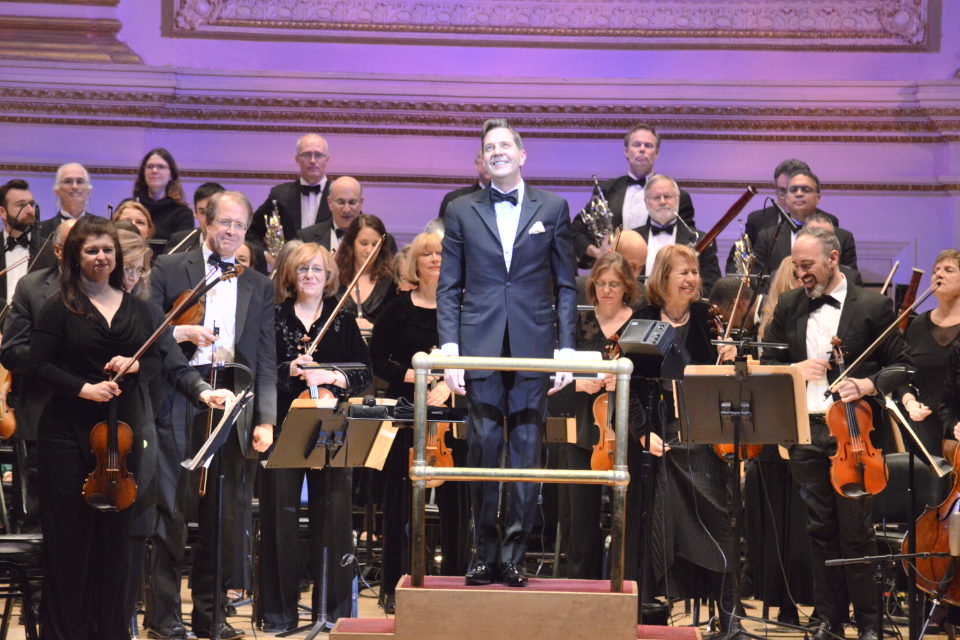 The New York Pops’ final performance of its 35th anniversary season was a major success – but of course, an orchestra like this in a venue such as Carnegie Hall was always destined for greatness.

The New York Pops: Best of Hollywood exuded all the charm of Tinsel Town’s award-winning glory. The evening’s arrangements, directed and conducted by the charismatic Steven Reineke, were beautifully performed.

Ranging from the classics of the 1930s to the blockbusters of today, the song choices were eclectic enough to please everyone. Without giving in to some of the more obvious and on-the-nose scores that come to mind when one hears ‘blockbuster,’ the Pops’ choices were heartfelt and well-considered.

Listeners with a strong interest in movie history will have let out a soft laugh at each song’s introduction – either because of their love for the respective composer, or for the film itself.

For the more casual fan, at first glance the program may have seemed lacking in recognizable hits. However, once the notes swelled and the perfectly-executed melodies hit their ears, they surely will have felt at home among the instantly identifiable scores. The evening had a strong focus on songs from the most critically-acclaimed movies in history, with many of the hits lasting the test of time through repeated usage in media, or through their multiple Academy Awards.

However, a well-composed song is only half the battle. The other half is evenly split between a passionate maestro and a tight-knit group of skilled musicians. Luckily, the New York Pops orchestra utilizes all three components with aplomb.

The performers’ first notes of the evening brought a smile to our faces – the sound that filled the auditorium was the unmistakable fanfare featured at the start of all 20th Century Fox movies. Led by the group’s crisp and strong snare drums, the orchestra in its entirety began its performance with explosive dynamism.

The pieces were often so powerful that at their final note, the audience’s collective breath was halted, caught in their throat, resulting in that all-important moment of silence before rapturous applause.

As part of an audience, your own interaction with those on stage can be an integral part of enjoying the evening. It was truly magnificent to be able to bounce the musicians’ powerful energy right back at them with gusto.

It would be an understatement to say the iconic theater’s acoustics allow scores to be consumed with impeccable clarity – the way every composer dreams that their art may be heard. Alas, understatement or not: it’s still worth noting. The stand-out moment of the evening was Ennio Morricone’s score from The Mission. The suite included the movie’s main theme and the haunting “Gabriel’s Oboe.” Perhaps the most moving performance of the show, it was warmly received by all. A special nod of recognition must be given to principal oboist Diane Lesser for her impassioned performance.

Hairs on the backs of necks stood up, eyes became glazed with tears – it was a stunning rendition that took more than a moment to recover from.

The sheer variety of music played throughout the show was an impressive treat for movie buffs of all ages.

“Tara’s Theme” from Gone With The Wind filled the room with nostalgia for Old Hollywood glamour – and a lengthy, entirely creepy suite from Alfred Hitchcock’s Psycho brought us first to the edge of our seats, and then to delighted laughter at the jarring but familiar sound of the strings.

The late, great James Horner was celebrated with a superb delivery of his score from Legends Of The Fall, and one of Disney’s top composers Alan Menken was honored with the inclusion of the 1995 hit from Pocahontas, “Colors Of The Wind.”

An evening celebrating Hollywood scores wouldn’t be complete without including high-profile names such as Hans Zimmer, Danny Elfman, and John Williams. Three of the masterminds behind most major scores of the last few decades, the decision to feature them surely must have been an easy one.

Zimmer’s epic compositions from Gladiator (2000) were brilliantly performed with the addition of special guest Peter Skaar. The talented young musician, whom we learned had persevered through exceptionally difficult personal circumstances, was welcomed on to the stage with thunderous applause.

As the show closed out, an altogether warm and contented atmosphere filled Carnegie Hall. The performance felt inclusive to all people – of different tastes, ages, and backgrounds. To hear popular music played by such renowned musicians, and in such a hallowed hall, is something truly special. The grandeur of a full orchestral sound should never be limited to the scope of classical music alone.

The New York Pops, once again, have proved that beauty should be enjoyed by all.

You can find tickets to the New York Pops’ 35th Birthday Gala here, starting from $75. The evening will feature music honoree Alan Menken plus many more special guests, and takes place in Carnegie Hall on April 30, 2018.