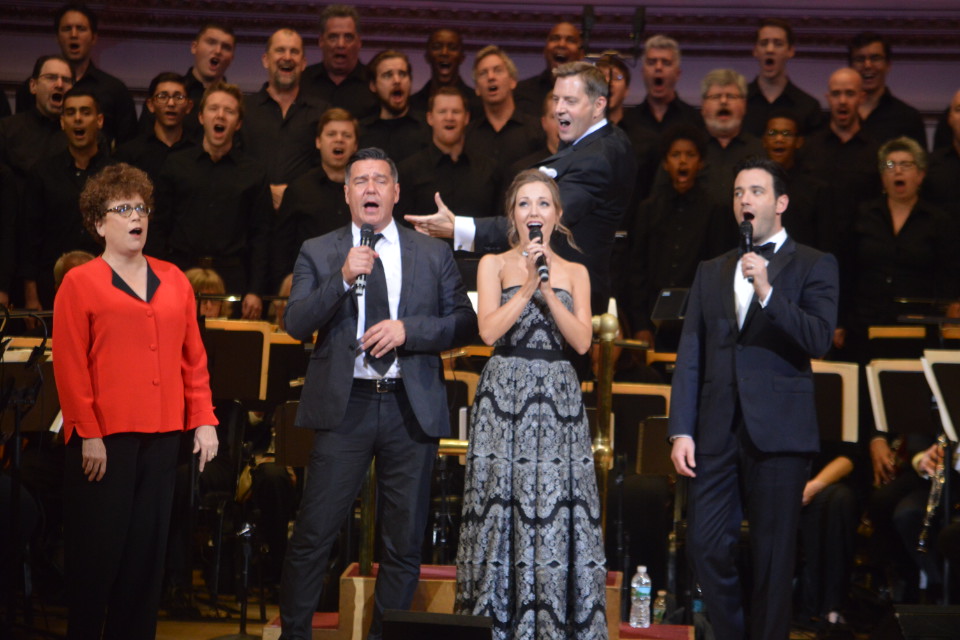 On Friday, Oct. 14 Steven Reineke, Music Director and Conductor of The New York Pops, opened the season with a spectacular concert titled, “The Musical World of Lerner and Loewe,” celebrating the legendary composing team responsible for major hits such as Brigadoon, Camelot, Gigi, Paint Your Wagon and My Fair Lady. Three remarkable guests were featured, Colin Donnell, Laura Osnes and one of opera’s most beloved baritones Nathan Gunn, making his Pops debut. Also on stage were about 70+ singers with Judith Clurman’s Essential Voices USA.   Steven wrote in the program notes that he closed his inaugural season in 2010 with a Lerner & Loewe program and felt that it was time to revisit the material since My Fair Lady was celebrating its 60th Anniversary as it opened on Broadway in 1956. He also noted that he used the timeless Johnny Green arrangements from the classic RCA Victor LP recorded 50 years ago.

This concert featured songs from the above-mentioned five shows and opened with a thrilling overture of samples from each. The casting couldn’t have been more perfect as we heard, Nathan as King Arthur sing the title song from “Camelot” that opened in 1960. Nathan & Laura scored with a delightful duet of “What Do The Simple Folk Do?” and Colin’s powerful “If Ever I Would Leave You” delighted the crowd.

Paint Your Wagon opened in 1951 and the big hit from that show was “I Talk to the Trees” sung beautifully by Colin & Laura. Nathan, backed up by Essential Voices USA, filled Carnegie Hall with a powerful rendition of “They call the Wind Maria.” The enchanting Brigadoon was Lerner & Loewe’s first big hit, and aside from the brilliant standard “Almost Like Being in Love” sung by Nathan & Laura, they also delivered a sweet duet on “The Heather on the Hill.”

The four shows featured were all made into successful motion pictures and collectively won 11 Oscars. Gigi worked in the opposite direction as it began as an Academy Award-winning film and later was adapted for the stage. Laura soloed on “Say a Prayer for Me Tonight” and Essential Voices USA performed a rousing “The Night They Invented Champagne.” Nathan & Laura sang the charming duet, “I Remember It Well” immortalized by Maurice Chevalier and Hermine Gingold. One of the highpoints of a remarkable evening was Nathan’s rendition of the title song from Gigi accompanied by Essential Voices USA that built to an exciting crescendo. The final show featured was My Fair Lady, considered by many to be a “perfect” show that opened in 1956 and ran for 6 ½ years. At the time, it was the longest running show ever. Rex Harrison’s star turn as Professor Henry Higgins, was repeated in the film. Julie Andrews created the role of Eliza Doolittle on Broadway, but Audrey Hepburn was cast in the film. Every song in this show is a classic and familiar to most audiences. Laura charmed the crowd with “Wouldn’t It Be Loverly?” backed by Essential Voices USA, then performed a furious “Show Me” and demonstrated her dazzling soprano with “I Could Have Danced All Night.” The guest artists performed a terrific trio of “The Rain in Spain,” a reminder of the humor and brilliance of the score. Two audience favorites was Nathan’s heartfelt “I’ve Grown Accustomed to Her Face” and Colin’s lovely rendition of “On The Street Where You Live.”

Between the musicians and singers, there must have been nearly 200 people on the stage of Carnegie Hall and every once in a while I would shut my eyes to simply feel the power of the music and let it waft over me. Kudos to Essential Voices USA, the featured guest artists, the incredible Lerner & Loewe score, and the extraordinary NY Pops led with great passion and enthusiasm by Steven Reineke that is a true gift to the city!

For more info and performance schedule.