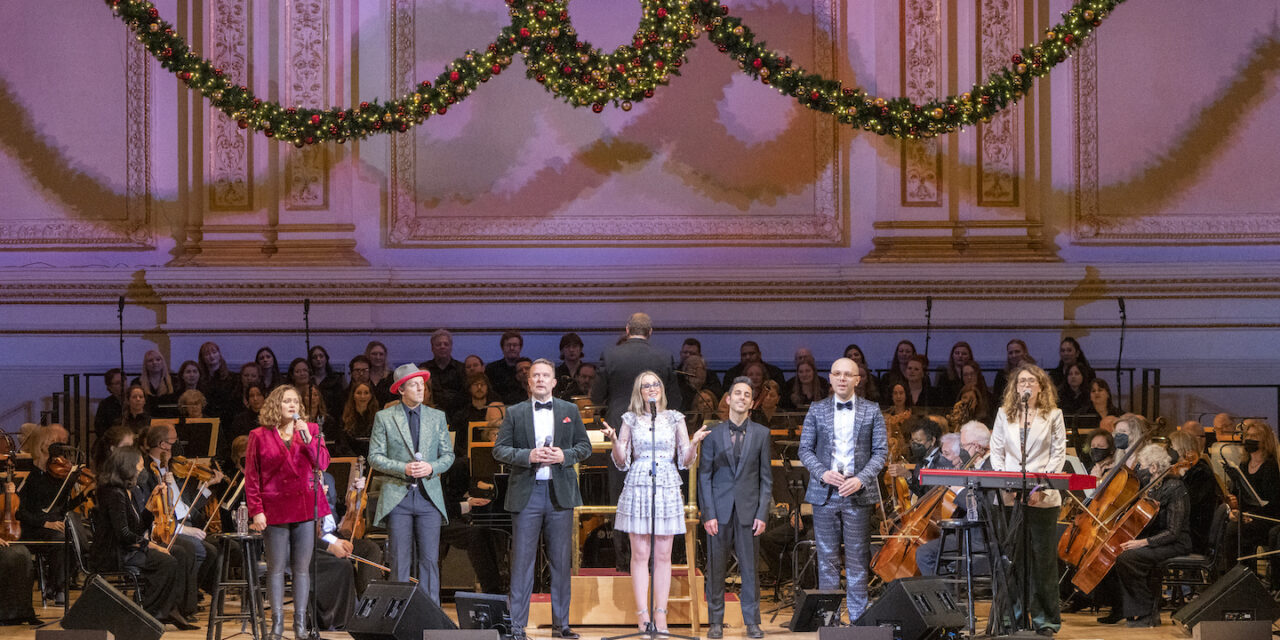 As the song suggests, “It’s the Most Wonderful Time of the Year,” and certainly for many fans of the New York Pops, the annual Christmas/Holiday concert at Carnegie Hall, Stern Auditorium is a much-anticipated event. The Pops orchestra didn’t disappoint in Rockin’ Around the Christmas Tree, delivering the celebratory goods with its customary level of excellence. And it’s always a treat to experience the energetic music director and conductor Steven Reineke at the podium. He’s half the fun with his expansive charm, bright smile and personal dynamism.

The opener, Carmen Dragon’s arrangement of the traditional “Deck the Halls,” whose roots amazingly go back to the 16th century Welsh carol, “Nos Galan,” called up hints of hunting horns and festive bells, as tempo changes and crashing cymbals also added to the joyful aural experience. The orchestra was then joined by the Essential Voices USA chorus, under the direction of Judith Clurman, leading to a big bang of a glorious finish. Later in the program, the Pops orchestra offered a very brisk “Sleigh Ride,” that dashing through the snow tune full of Leroy Anderson’s compositional sound effects. There were sleigh bells, whip cracks, galloping horse clops and that wonderful bit of whimsy at the very end—the neighing of the horse, artistically emulated by a single trumpet riff. Another exhilarating delight was “The Little Drummer Boy (Bolero),” which answers the question, what if Maurice Ravel had written that carol? Robert Wendel’s arrangement of the drummer boy meets bolero (composed by Katherine K. Davis, Henry Onorati and Harry Simeone) began with a sweet solo flute opening, which, of course, yielded to the piece rising in force and drama till its climactic conclusion.

The disappointment in Rockin’ Around the Christmas Tree was the selection of indie pop star Ingrid Michaelson as its sole guest star. She’s a singer-songwriter with particular appeal to a young set and one who has attained a level of success in the music world. Her best-known songs include “The Way I Am,” “Girls Chase Boys” and “You and I.” In 2020, she received an Emmy Award nomination for her original song “Build It Up.” Michaelson’s achievements are admirable, but she probably is a virtual unknown to the majority of the Pops audience. More to the point, however, is that her low-key music and laid back presentation didn’t match the festivity of the occasion or the Pops dynamism in serving up an uplifting holiday show.

Michaelson was mostly accompanied by two backup singers, Allie Moss and Hannah Winkler, who added delicious vocals to Michaelson’s sweet but light soprano. There were several Christmas standards offered, including “Let It Snow! Let It Snow! Let It Snow!” (Jule Styne, Sammy Cahn) and an Andrews Sisters-inspired “Male Kalikimaka” (Alex Anderson). For “Christmas Valentine” Michaelson brought out the songwriters, Jason Mraz and Dave Barnes, to help sing their creation. She also welcomed Will Chase to the stage, who she oddly introduced as her husband and then stumbled to retract the statement. Winkler settled the matter by confirming the couple’s marital status. Chase possesses a smooth crooner’s vocal tone, which meshed well with Michaelson’s own, but the delivery of “I’ll Be Home for Christmas” (Walter Kent, Kim Gannon, Buck Ram) drifted to the doleful, without any indication of the lyric’s undertones of hopefulness. In sum, Michaelson’s overall style and preference for soft tempos would have been better suited to a different kind of Pops program other than one dedicated to the holidays.

On the festive side, The Essential Voices had their own features in the David Chase arrangement of the traditional “The First Noel” and in a jolly “Jingle, Jangle Sing-a-Long,” arranged by Reineke. Santa himself, entering from the back of the house with one of his elves, made a big “surprise” appearance with lots of happy-making metaphoric bells and whistles. Ending the concert was an all-hands-on-deck traditional “Auld Lang Syne,” led by MIchaelson, which drifted from the nostalgic to the somber. Conversely, the play-out number of Rockin’ Around the Christmas Tree was an exceedingly cheerful, toe-tapping traditional “We Wish You a Merry Christmas,” sung by all and played with zest—an excellent way to step out into the cold night air with holiday spirit aglow.