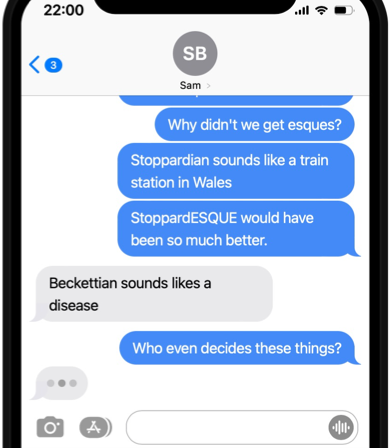 The world premiere of Textplay, by Archer Eland, a virtual play that may be the world’s first text play.  In Textplay, presented by NYU Skirball, dialog appears as an exchange of text messages that can be viewed on mobile and desktop devices. It is available On Demand, September 20 – December 3, and can watched from anywhere in the world. Running time is 35 minutes.

In this witty and surprisingly touching production, the great playwrights Tom Stoppard and Samuel Beckett find themselves trapped in some inescapable other universe, only able to communicate via text message. Together they try to make sense of their lives and legacies, grappling with (and occasionally triumphing in) a medium that has consumed us all. visit Textplay Tickets

The Bret Adams and Paul Reisch Foundation is pleased to announce the recipients of their 2022 Idea Awards for Theatre; three categories of grants awarded to adventurous new voices in playwriting and musical theatre, as well as the visionary playwrights who have inspired and blazed trails before them.

Ankita Raturi is the recipient of this year’s Ollie New Play Award, and two Vivace Musical Theatre Awards will be presented to John-Michael Lyles and Daniel Alexander Jones.Recognizing emerging talent and original work with ambitious theatrical ideas, both awards are bestowed to each recipient with a $25,000 prize.  Each of the four artists will also receive a unique stone statuette hand carved by Bruce Ostler.

Join Rosalind & Celia as they flee into the Forest of Arden for romance, music and adventures in cross-dressing in Shakespeare’s startlingly modern comedy As You Like It, produced by Frog & Peach Theatre Co, directed by Lynnea Benson at Theatre 71 (152 W. 71 St. NYC). begins Sept. 30 thru Oct. 23 http://frogandpeachtheatre.org/as-you-like-it/

This year’s selection of eleven plays was curated by Co-Artistic Directors Mike Lew (Teenage Dick) and Colette Robert (Behind the Sheet). Ten plays will be presented across two different series from Sunday October 16, 2022 through Sunday November 13, 2022 at EST (545 West 52nd St, New York, NY 10019). An eleventh play, Yan Tután, will be streamed October 23 to November 13 in collaboration with Perseverance Theatre in Alaska. Series A will begin on Sunday, October 16 Series B will begin on Sunday, October 23. www.ESTnyc.org