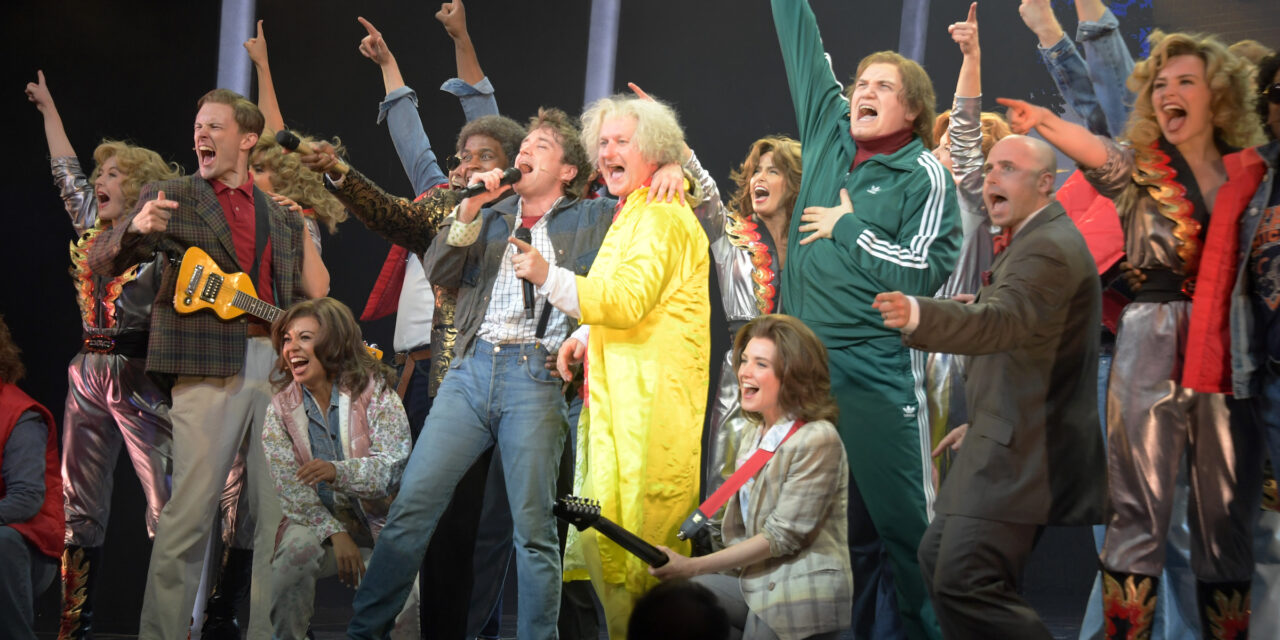 BAT OUT OF HELL – The musical opens tonight (9/14)at Manchester Opera House continuing its tour thru November 5, 2022.

BAT OUT OF HELL – The Musical, with the electrifying rock songs of Jim Steinman propel an epic story of rebellious youth and passion as Strat, the immortal leader of The Lost, has fallen in love with Raven, the beautiful daughter of the tyrannical ruler Falco.
BAT OUT OF HELL – The Musical stars Glenn Adamson (American Idiot) as Strat, Martha Kirby (Grease, Rags the Musical) as Raven and the original leading cast members Rob Fowler (Mamma Mia!, Bat Out of Hell) as Falco and Sharon Sexton(Mamma Mia!, Bat Out of Hell) as Sloane.
The UK & Ireland Tour of BAT OUT OF HELL – The Musical has book, music and lyrics by Jim Steinman, direction by Jay Scheib, choreography adapted by Xena Gusthart, with musical supervision and additional arrangements by Michael Reed.
BAT OUT OF HELL dedicates this tour to the memory of Jim Steinman, who sadly passed away on 19 April 2021.

BACK TO THE FUTURE The Musical at the Adelphi Theatre, with a pre-show drinks reception at the Corinthia hotel. Guests in attendance included the creators of the Back to the Future film trilogy, Robert Zemeckis & Bob Gale, with original ‘Doctor Emmett Brown,’ Christopher Lloyd, Andy Serkis, Lorraine Ashbourne,Tracey Ullman & Caroline Quentin.

BACK TO THE FUTURE The Musical is directed by Tony Award-winning director John Rando (Urinetown, On The Town) and stars Roger Bart (Desperate Housewives, Stepford Wives, The Producers) as ‘Doctor Emmett Brown’, Olly Dobson as ‘Marty McFly’, Hugh Coles as ‘George McFly’, Rosanna Hyland as ‘Lorraine Baines’ and Cedric Neal as ‘Goldie Wilson’. Mark Oxtoby played the role of ‘Doctor Emmett Brown’ on press night due to the indisposition of Roger Bart.

Based on the Universal Pictures/Amblin Entertainment film, BACK TO THE FUTURE The Musical has a book by Bob Gale, featuring 16 new songs with music and lyrics by Emmy and Grammy Award-winning Alan Silvestri and six-time Grammy Award-winning Glen Ballard, with additional songs from the film including The Power of Love and Johnny B. Goode.