Our Man in Santiago 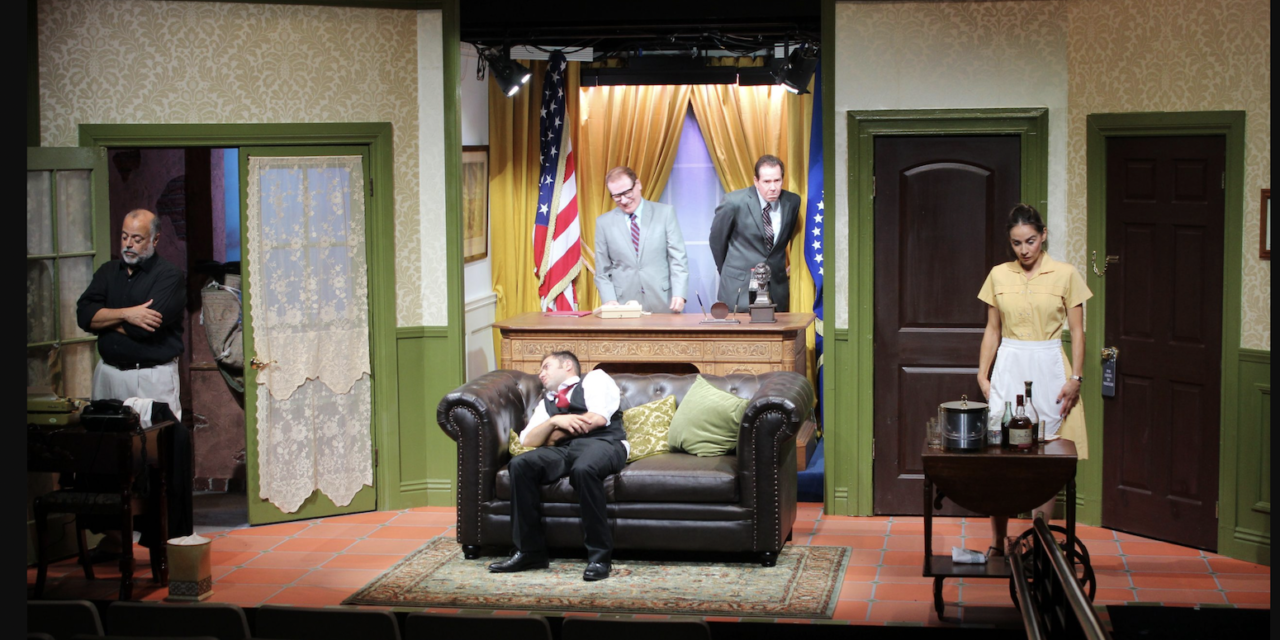 When political intrigue by the power-hungry goes off the rails, often the results are too ridiculous to believe. Our Man in Santiago, Mark Wilding’s hybrid-genre, spy thriller and satiric farce pokes fun at political players in our historic past. However, Wilding vitally illuminates our nation’s penchant to interfere with governments other than our own for political and opportunistic purposes. This comedic production in its New York City Off Broadway premiere, currently runs at the AMT Theater (354 W 45th Street), until the 28th of October.

Based on true events, the high-wire comedy has as its central issue the bungled U.S. attempt to overthrow Salvador Allende, Chile’s Marxist leader. Allende was democratically elected in 1970, much to the chagrin of the anti-communist Richard Nixon and his Republican Administration. They feared, that like Cuba’s Fidel Castro, Allende would nationalize U.S. corporations.

At its height,  Allende’s government sported daily protests by pot-banging mothers, who marched against starvation and other social ills. They hoped to bring about positive reforms. Instead, with U.S. interference, what resulted was dictatorship and oppression under the despotic regime of Augusto Pinochet, Allende’s successor.

Wilding, an Emmy nominee, and WGA award-winner (Grey’s Anatomy, Charmed), expertly teases out the complicated details about these events with humor. Additionally, he ridicules the CIA as a tool of U.S. political leaders to further their own hidden agendas.

At the top of the play, CIA agent Daniel Baker (Nick McDow Musleh), testifies before the Senate Select Committee on Intelligence about the events that occurred the day of the 1973 Chilean coup d’état, which resulted in Allende’s death. The primary question the Senators ask concerns whether the CIA killed Allende. As Parker gives his account, the action shifts to a hotel room across from La Moneda Palace in Santiago, Chile. Subsequently, events speed like a rollercoaster through unexpected twists, turns, ups and downs to arrive at an answer about Allende’s death, which up until the last decade was surrounded in controversy.

In the flashback Parker arrives at his hotel room, where he meets with CIA station chief Jack Wilson (George Tovar), to receive his assignment. Initially, Musleh’s Ivy League educated Parker appears naïve, inexperienced, and soft-hearted. He is in the dark about why he has been sent on this mission to Chile.

Tovar’s Wilson is commanding and assured, as he gives advice about not trusting anyone, including the maid Maria (Presciliana Esparolini). To affirm his point, Wilson inanely has Parker unravel toilet paper handed to him by Maria, because it might hold a microscopic spying device. The irony of the precious toilet paper being wasted is not lost on us considering the toilet paper debacle during the 2020 COVID pandemic. Likewise, for average Chileans in 1973, toilet paper was a scarce luxury. As Parker dutifully obeys his chief and unspools the roll, we cringe and laugh at Wilding’s ironic toilet paper reference/parallel.

Parker appears to be taken in by Wilson’s technological spy device explanation. By degrees, Wilson places neophyte Parker under his power to do his bidding as the “fall guy.”

Wilson persuades Parker of his “expertise” with his connections to the top echelons of power. Scenic designer Jeff G. Rack transports us to the Oval Office with his clever set design, so we might eavesdrop on Wilson’s phone conversation with President Nixon (the hysterical Steve Nevil), and Henry Kissenger (the equally humorous Michael Van Duzer). Nixon and Kissenger conspire with Wilson via speaker phone in a conversation which Wilson allows Parker to hear to gain his trust. In the hysterical scene Nixon and Kissenger reveal the importance of their covert operation and Wilson’s vital role as their “go-to” guy to dispatch Allende.

Nixon assures Wilson he will be rewarded with a promotion, if he doesn’t botch this Black Op as the CIA did the previous week humiliating the agency. Nixon assures Wilson if all goes well, all ends well. What follows is a romp of agent vs. agents. Wilson convinces Parker to take charge of the mission to confront Allende, assassinate him and return with photographs that prove he’s dead. And that is just the beginning.

The ensemble is marvelous. Their hijinks, especially toward the conclusion, bring belly laughs. The direction by Charlie Mount quickly moves the action with an appropriate pace for this farce. The puns, quips, and jokes are on point. The actors’ comic timing is excellent.

Wilding’s work is multi-faceted. It delivers in its farcical adventure with numerous ironies that the actors authentically negotiate for maximum effect. The themes are current. As Our Man in Santiago answers the overriding question about Allende’s death, it raises other questions about a functioning democracy, the malign influence by foreign powers, the price paid in bloodshed to achieve a democracy.

This is one to see. Performances run with no intermission (100 minutes) at the AMT Theater until October 28th. For tickets and times go to their website at https://ourmaninsantiago.com/