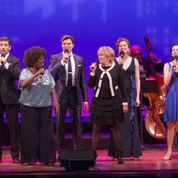 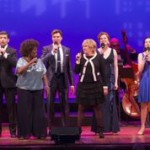 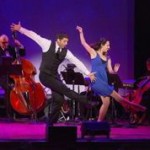 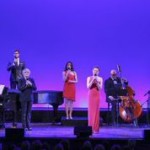 David Zippel mines the musical theater catalog for shows that didn’t succeed but had great songs at the last concert of the season of the 92 Y Lyrics & Lyricists Series.

Renowned lyricist David Zippel served as Artistic Director, writer and host of the 92Y Lyrics & Lyricist last concert (May 31-June 2) of the season with “Panning for Gold: Great Songs from Flop Shows.” David was a charming and erudite narrator and said that idea for this program came to him when he realized that “there are hundreds of less than terrific shows which contain wonderful songs worth revisiting. Even legendary Broadway songwriters have come face to face with failure. We should not find it shocking that among their less than perfect shows are songs that equal their finest creations.”

David called the first act “The Fall of the Titans” as it featured songs from shows authored by some of Broadway’s giants. To open, the cast sang “A Broadway Musical” by Lee Adams and Charles Strouse from the 1978 show of the same name. Considered one of the most beautiful songs of all time “All The Things You Are” (Kern & Hammerstein) came from the little known Very Warm for May and was beautifully sung by Brent & Christiane.

Lilllias scored on two iconic ballads “Spring Can Really Hang You Up The Most” from The Nervous Set (Fran Landesman & Tommy Wolf – 1955) and “Here’s That Rainy Day” from Carnival in Flanders -1953) by Johnny Burke & James Van Heusen. She reprised her Tony winning number from The Life (Coleman & Gasman) as the audience cheered watching this amazing performance of an old hooker complaining that she is tired of “The Oldest Profession.”

Jessica was terrific accessing Tony’s assets in “You’ve Got Possibilities” from the Adams & Strouse musical, It’s a Bird…It’ a Plane…It’s Superman – 1966) and also this duo was charming when Tony sang “Marry Me (The Rink by Kander & Ebb) and Jessica with “A Quiet Thing” (Flora The Red Menace) and then coming together with a lovely dance number.

The versatile Christiane Noll was brilliant on “Glitter and Be Gay” from Candide (Leonard Bernstein and Richard Wilbur), a showcase number for sopranos but very hard to pull off. She was equally remarkable singing an emotional medley of “Good Thing Going/Not A Day Goes By” from Sondheim’s Merrily We Roll Along (1981).

There is no finer voice on Broadway than that of the handsome Brent Barrett and he proved it once again singing “A Woman is How She Loves” from Coco by Lerner & Previn which today is considered sexist and politically incorrect. He dazzled on the thrilling “Where I Want To Be” from Chess (Rice & Ulvaeus) and no one could have sung it better.

I’ve seen Lorna Luft perform over the years and was a fan. However, when singing a medley of the songs from On a Clear Day (Lerner & Lane), she seemed to be struggling vocally and perhaps the key could have been lowered. Her voice improved on the other solo from Mack and Mabel (Jerry Herman) “Time Heals Everything” but the timing seemed to be off. Could just have been an off day for her.

David talked about his own failures such as the one uncredited song he wrote for Marilyn in 1983 with Wally Harper “Cold Hard Cash” sung by Jessica & Christiane. Also, he wrote The Goodbye Girl with Marvin Hamlisch that starred Bernadette Peters & Martin Short in 1993 which ran for over 8 months. Tony & Jessica performed the delightful “Paula” (An Improvised Love Song) from that show.

The concert closed with the perfect song from 13 Days to Broadway (1985) by Barbara Fried and Cy Coleman “You There In The Back Row” which summed up the feelings of artists involved in Broadway shows who long to be successful and loved. Kudos to David Zippel and his team for this enjoyable program which completed the 45th season of L & L, one of NY’s longest running series, and certainly not a “flop” in any sense of the word but a certifiable hit!

The 2015 Series has been announced with songs of Stephen Sondheim, New York, Songs of the City, Hollywood’s Leading Ladies and the 50th Anniversary of Fiddler on The Roof with legendary composer Sheldon Harnick, the other still be to announced.