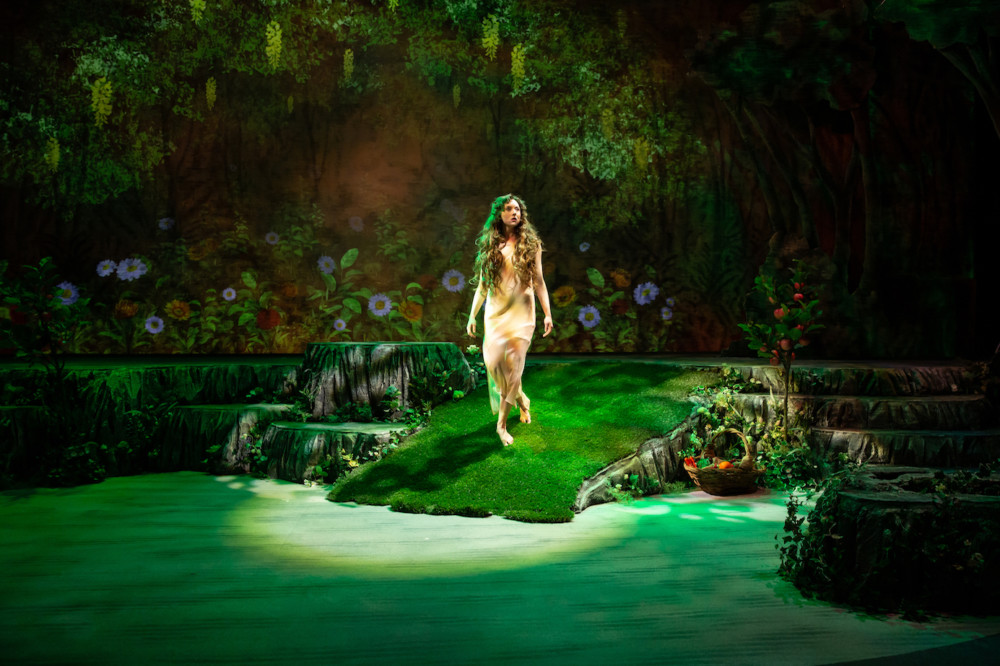 Samuel Johnson wrote of John Milton’s Paradise Lost, an epic, 10,000-line poem in 10 (later, 12) books, first published in 1667, that it was “a poem which considered with respect to design may claim the first place, and with respect to performance the second, among the productions of the human mind.” However, don’t expect a faithful rendering of it in Tom Dulack’s half-serious, half-spoof theatrical adaptation, now on Theatre Row in an attractive mounting by the Fellowship for the Performing Arts (FPA), a “company producing theatre from a Christian worldview to engage a diverse audience.”

As you may recall, if you ever had to plow through its dense, classical language in an English lit class, Paradise Lost tells of how Satan (formerly Lucifer), the brightest angel, having revolted against God’s supremacy, loses the battle and, with his millions of rebellious angels, is driven from Heaven and consigned to Hell, where he builds the city of Pandemonium. Seeking vengeance, Satan travels to the Creator’s new world, populated by the first humans, Adam and Eve, and in the form of a serpent, enters the Garden of Eden where he entices Eve to eat a forbidden apple from the Tree of Knowledge. Soon, the loving Adam also partakes of the forbidden fruit, finalizing Man’s downfall as represented by Adam and Eve’s expulsion from Paradise. 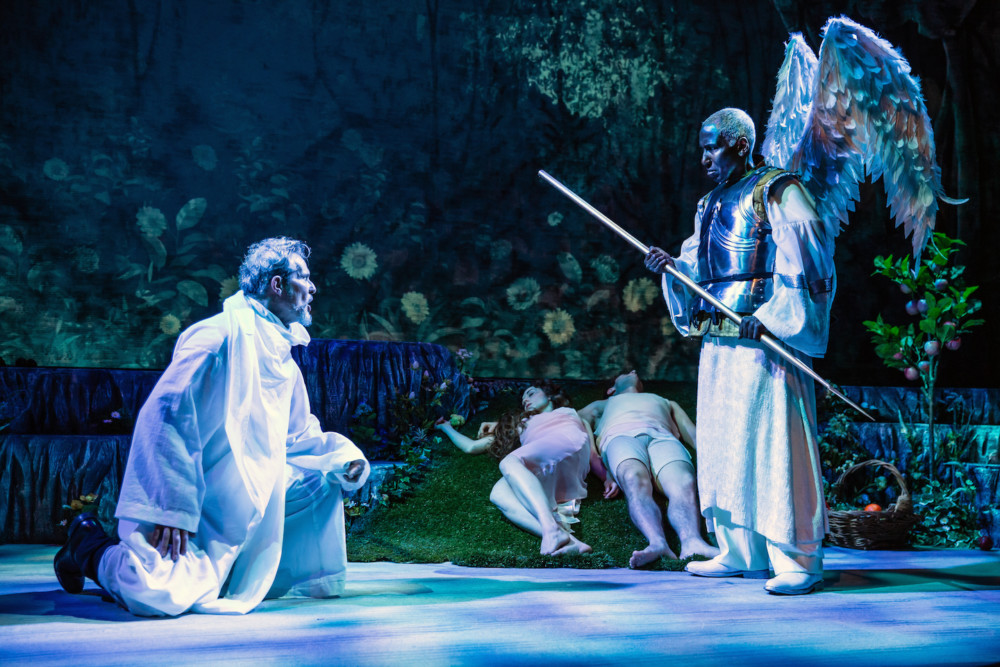 This grand tale, whose themes are summed up in a note by Max McClean, FPA artistic director, as “rebellion, good and evil, disobedience, original sin and the origins of redemption,” has been compressed by Dulack into an hour-and-40-minute rom-com/sci-fi hybrid in present-day language. One moment it’s rhetorically bombastic, the next it’s going for the jocular.

Dulack reduces Milton’s abundant cast of characters to six, with Lucifer a winged, trim, silver-haired-and-goateed smoothie, railing against the tyrant God (into a microphone at one point) and his “intolerable Messiah son.” The elegant David Andrew Macdonald is an attractive older man but one wonders whether a more youthful actor might have made a more appropriate seducer when Lucifer tempts Eve to eat the apple. 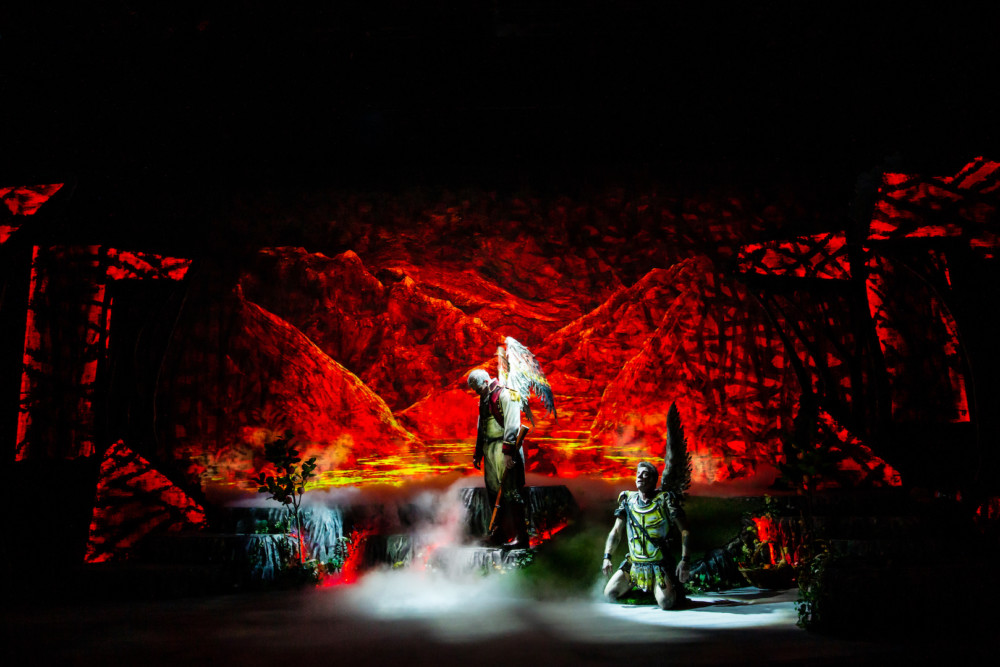 Lucifer is accompanied by a sidekick, Beelzebub, a dirt-smeared doofus who’s lost a wing in the cosmic fray. He’s amusingly played by Lou Liberatore, wearing a classical breastplate and braying like a fugitive from the gang that couldn’t shoot straight. In one of the play’s several postmodern gags, he lugs around a vintage battlefield phone he’s always slapping because of bad reception.

That phone is matched for gimmicky irrelevance by the electric scooter ridden by Sin, Satan’s daughter, born from his forehead. She, we’re reminded, after having been raped by him, gave birth to Death. We don’t meet that jolly fellow but Sin, rambunctiously portrayed by the raspy-voiced Alison Fraser, who banters profanely with her incestuous dad, looks like a syphilitic Shakespearean bawd. Her midsection, though, described in the script as “teeming live vermin and rat-like crawling things,” looks more like she’s spilled her guts.

In Eden, of course, dwells the beautiful, innocent Eve (Marina Shay, delightfully naive), amazed that she knows as much as she knows albeit not knowing how. She, like Dr. Dolittle, delights in talking to and naming the (unseen) fauna around her. Then enters the handsome Adam (Robbie Simpson, ingratiating), patiently supportive of this partner he proudly produced from his own rib, and whom he promises to treat as his equal. Don’t expect nudity, however, as each wears undergarments matching their skin tones, she in a shift, he in a wife-beater and briefs. No fig leaves need apply. 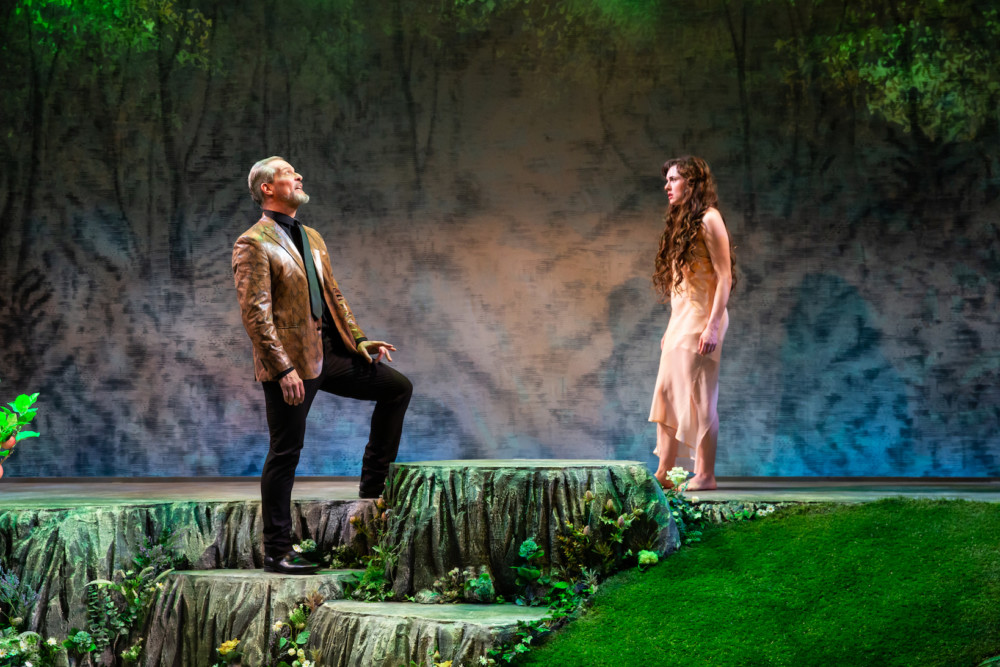 Finally, we have the winged archangel Gabriel (Mel Johnson, Jr.), white-robed and breast-plated, whose guardianship and mentorship of Adam and Eve, and threatening admonitions toward Lucifer, conflate Gabriel with Milton’s Michael and Raphael. His presence only serves to make Eve question everything, to the fearful Adam’s dismay, thus sparking a dispute over their relative virtuousness and free will.

The dialogue now and then slips in a Miltonian phrase, like it being “better to reign in Hell than serve in Heaven,” but is otherwise Dulack’s own concoction, ranging from the formally articulate to the crassly colloquial. Lucifer may say, “I have to circumnavigate the Profound Void of Unessential Night that gapes to receive me,” but Sin might shoot back, “Hate to tell you, lover-nuts, but you’re not going anywhere.”

Well-acted and effectively designed as it is, Paradise Lost diminishes its source material with its reductionist ploys. While it has its moments of sweetness, it can’t avoid wading in theological puddles. Ultimately, the resulting blend of humor, poetry, and rhetoric is insufficiently appealing to justify the play’s distortions.

If a satirical, modernist take on the story of Genesis was needed, one with already established stage credentials, the FPA might more wisely have considered, for starters, the works of Twain (in several versions), Shaw, and Miller. And even those apples have their own worms to contend with. 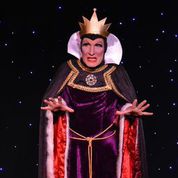 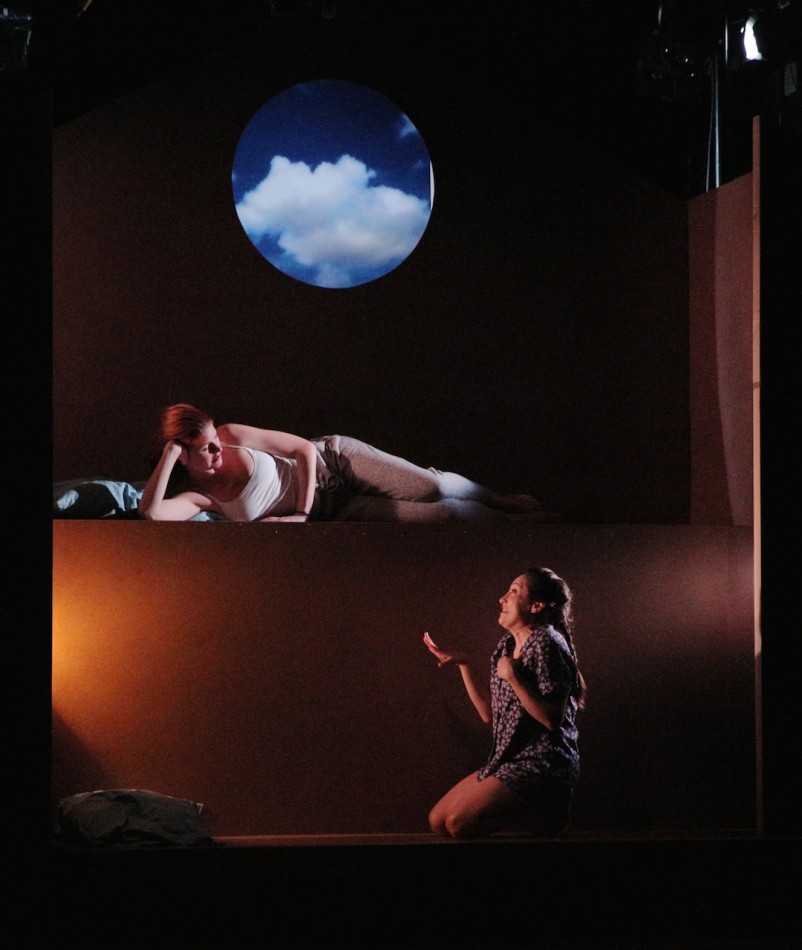 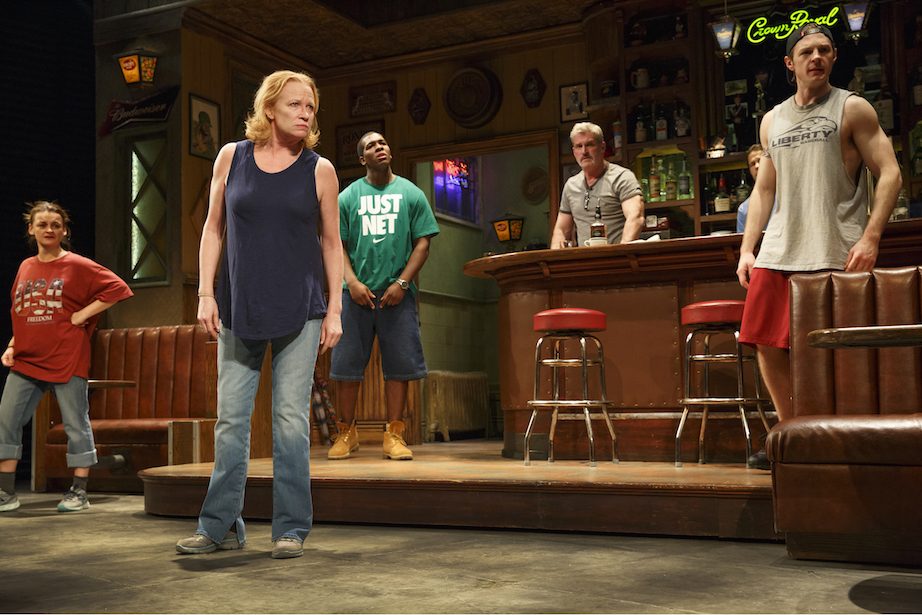