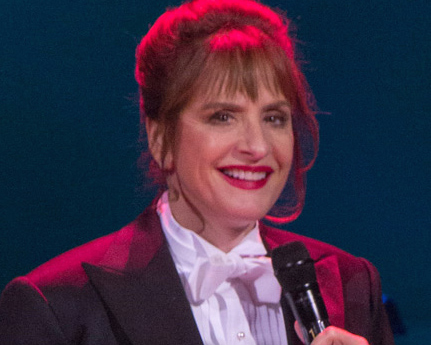 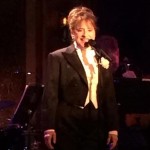 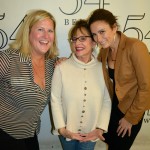 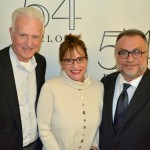 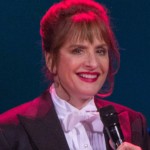 There is absolutely no question that Patti LuPone has “star quality.” By the time she reached her fourth encore and final number, “Buenos Aries” (Evita), a rapturous audience was on its feet pleading for more. But alas, it was time for Patti LuPone to take the road home.

According to LuPone, she’s “been on the road for a lifetime.” But Far Away Places isn’t “South American Way” in a banana hat or concertina-wielding, beret-clad Frenchmen pressing out “Under Paris Skies.” It’s the thinking person’s Linblad Expedition of travel; no Carnival party cruises here. LuPone’s road is a hard-won, bus-and-truck, show-biz road where life is seen up close and personal.

This tone is set with the opener, Jacque Brel’s powerful and driving “Amsterdam,” with its raw antics of sailors on shore leave. Reaching back in time (travel is not just about place, she says) she sings “Just a Gigolo,” (1924/29, Irving Caesar, Leonello Casucci, Julius Brammer), a metaphor about the social collapse in Austria post World War I. The harmonic construction is ironically bittersweet, a big thematic element of LuPone’s world tour.

In Indonesia we meet “Suribaya Johnny,” from Kurt Weill’s 1929 Happy End. Johnny is a horrible thug, but poor Lil can’t help loving him anyway. Two Frederick Hollander songs are represented from the cynical 1948 film, A Foreign Affair: “Black Market” and “Ruins of Berlin.” Kurt Weill’s “Berlin In Lights,” written for a 1928 festival, features incongruously jolly lyrics wrapped in chromatics that yield an uneasy tension. LuPone tackles the Great Depression and the disenfranchised with Harry Warren and Al Dubin’s “My Forgotten Man,” from the film Goldiggers of 1933.

Despite the heady material, Far Away Places in not a downer. LuPone’s intelligent and witty patter punctuate the show; there are also a handful of pleasant, melodic tunes, such as Billy Joel’s “Vienna” (1977) and Cliff Richard’s 1959 number one UK hit, “Traveling Light.” Amusing songs include the playful 1953 Nat Simon, Jimmy Kennedy romp, “Istanbul,” while “Supermarket in Old Peking,” is a clever Cole Porter tune from the 1958 made-for-television Aladdin. LuPone’s first encore, “Nagasaki” by Harry Warren and Mort Dixon, a popular 1928 jazz hit, is a little bawdy and a lot silly.

For a powerful second encore, LuPone sings David Yazbek’s energetic “Madrid” from the 2010 musical Women on the Verge of a Nervous Breakdown, followed by the last planned encore, the sweet and soft Scottish Folk Song, “Haste Ye Back.”

Two-time Tony Award winner, Patti LaPone, has a powerful voice – well-controlled and purposefully employed in this outing – and a superb articulation that makes every song sound new. At heart, she’s an actress – one who sings very awfully well. Clearly, her audience would follow her anywhere the road leads. 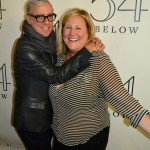