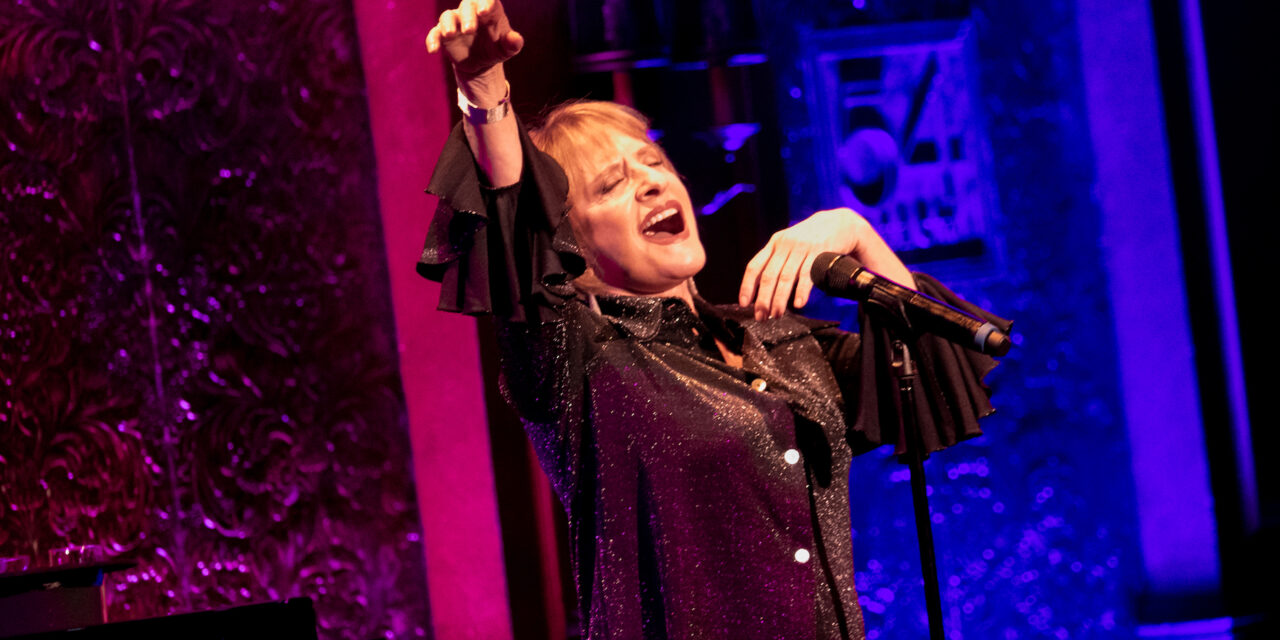 Three-time Tony Award Winner Patti LuPone has taken up a residency at 54 Below, performing 16 solo shows from December 20th 2022 through January 8th 2023. Tickets to watch the livestream of the 8 pm performance on Sunday, January 1st are available for purchase on www.54below.com for $40.

To mix things up and make it more interesting for LuPone fans seeing the show in-person more than once during this run, LuPone changes up the show every night. Other than a few select songs she sings at each show, the rest of the potential set list is on little strips of paper in a black hat. The show is appropriately named Songs from a Hat, which also gives a nod to the Sondheim line in Company “Does anyone still wear a hat?” 54 Below patrons sitting ringside get the chance to reach into the hat and randomly select the next song. There are 43 songs in the hat, including 13 songs that Patti never sang on stage and just started working on two months ago with music director and pianist Joseph Thalken.

I was lucky enough to see / attend on two separate nights and witness very different shows. Only one song pulled from the hat was a repeat at my second show. The songs that drew the most exclamations and applause were, not surprisingly, “Ladies Who Lunch” from Company and “Don’t Cry for Me, Argentina” from Evita. The songs in the hat ranged from the myriad of shows she has starred in, along with some surprises like Elvis’ “Love Me Tender.”

In addition, the songs changing the mood of each show had a different vibe as LuPone feeds off the audience. At the first show I saw, LuPone was very jovial and funny and talked more to the whole room than individual patrons. At the second show, LuPone was a little more feisty as the audience members struck up conversations with her as they made comments regarding song choices and lyrics. LuPone warned the crowd at the beginning, “Some of these songs are new to me and I may f*ck up the lyrics now and again; bear with me.” When she did stumble over a line during her second-to-last number, a man in the audience called out the line. This started a very lively banter between the two, to the delight of the audience as LuPone asked the man, “Are you new to showbiz? Do you know who’s up here? I’m curious.”

The show is filled with a few fabulous surprises that I won’t ruin here by divulging, but each show has a wonderful bit during her short collection of Christmas songs. One thing I really enjoyed about seeing LuPone at her own cabaret show, rather than her performing lines in a big show, was that her personality really shone through. She was so funny, making faces and commentary during portions of the show. My favorite song that showed her humor was sung during the first show I saw, when someone selected “A Boy Like That” from West Side Story from the hat. LuPone did both parts of the duet, singing both Anita’s and Maria’s tracks. It was absolutely fabulous and also very funny.

LuPone is the ultimate Broadway star and every person in the room seemed to be absolutely delighted to be there. There is a cancellation line outside 54 Below every night for those hoping to get a chance to see the show. Or you can order the January 1st livestream show, and watch LuPone in your Pjs from your living room.