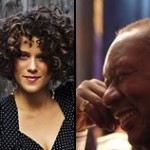 Some of the most entertaining acts in history have been “Perfect Pairs” – Abbott & Costello, Martin & Lewis, Lucy & Desi.  This Fall the Courtyard by Marriott presents “Broadway/Cabaret/Jazz Series: Perfect Pairs at The Palace!”  Perfect Pairs will feature the very best dynamic duos in Broadway, Cabaret and Jazz performing in an intimate setting on the HARMAN Stage on four evenings throughout the fall and winter. This series is made possible through the generosity of Presenting Sponsor Courtyard by Marriott.
This unique series, where the performers and audience both occupy the stage, is the result of the passion and hard work of Palace Theatre Board Member Lynn DiMenna.  “Lynn has been working quite diligently to bring this series to fruition for almost four years now,” said Executive Director, Michael E. Moran, Jr.  “Combining Broadway, Cabaret and Jazz and seating the audience on the stage with the performers will make for four extraordinary and intimate events.”
“I wanted to launch the series with something a little special,” said DiMenna, a cabaret performer herself. “Pairing some of the best entertainers in the different genres brings something unexpected and exciting to the mix that I think our audiences will love!”
Saturday, September 7, 2013 – 8 p.m.
JUDY CARMICHAEL & STEVE ROSS
Grammy nominated pianist Judy Carmichael, one of the world’s leading interpreters of stride piano and swing, and Steve Ross, who the New York Times calls “Crown Prince of New York Cabaret,” team up for an unforgettable evening.
Friday, October 18, 2013 – 8 p.m.
CHRISTINE PEDI & JOHNNY RODGERS
October’s evening features musical theater singer, comedienne and Drama Desk nominated Christine Pedi, and internationally-celebrated singer-songwriter, pianist, Broadway star, and recording artist Johnny Rodgers, who is described by Stephen Holden (The New York Times) as an entertainer “that can’t be found anywhere else” with “fused elements of Billy Joel, Peter Allen and Johnny Mercer.”
Wednesday, November 13, 2013 – 8 p.m.
CYRILLE AIMÉE & FREDDY COLE
In November, old world jazz and standards meets the next generation – Cyrille Aimée, an unstoppable, undeniable talent in the modern age of jazz and whose unique vocal stylings reflect her culturally rich background of Dominican rhythm and the incredible swing of the French gypsies, teams up with Freddy Cole (Nat “King” Cole’s brother) whose vocals – suave, elegant, formidable, and articulate – are among the most respected in jazz today.
Wednesday, January 22, 2014 – 8 p.m.
MARILYN MAYE & HOUSTON PERSON
The series goes out with a bang when Cabaret legend Marilyn Maye returns to the HARMAN Stage with world renowned tenor saxophonist Houston Person mixing the best in Broadway, Cabaret and Jazz.
Tickets for the Broadway/Cabaret/Jazz Series go on sale to Members as a subscription series starting July 16 at 11:00am; tickets go on sale to the general public as a series on July 23 at 11:00am; and single tickets and partial subscriptions can be purchased starting July 30 at 11:00am at www.SCAlive.org or charged by phone with major credit cards by calling the Palace Box Office at 203-325-4466. Tickets may also be purchased in person at the Palace Theatre box office in downtown Stamford, CT. The box office is open Monday-Friday from 10 a.m. to 6 p.m.  The 2013-2014 season is made possible by Palace Theatre’s Season Sponsors Seaboard Properties, Inc. and the Whittingham Family.
About the Palace Theatre
The vision of the Palace Theatre is to be the regional arts center for exciting entertainment that enhances and enriches the cultural, educational, economic, and social life of the community.  The Palace strives to achieve this vision by demonstrating integrity in all work and relationships, providing service and quality in all activities, fostering and promoting diversity of thought, ideas and culture, providing stewardship for the Stamford Arts community, emphasizing outreach in our community, and offering creativity in all endeavors.  Major funding is provided by the Department of Economic & Community Development and the Office of the Arts.  Programs made possible in part by the Fairfield County Community Foundation.
For more information please contact:
Michael E. Moran, Jr., Executive Director – 203-358-2305 | mmoran@scalive.org
Daniel O. Sierra, Director of Marketing – 203-517-3420 | dsierra@scalive.org