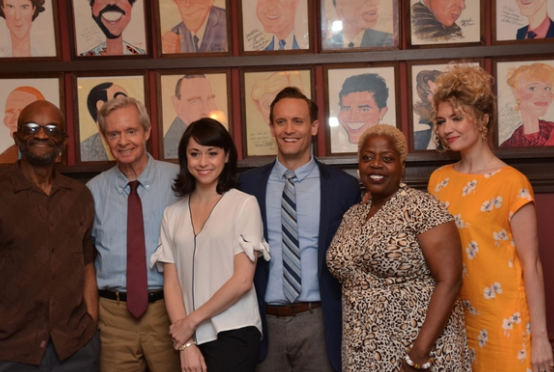 The company of Perfect Picture, with music by Gail C. Bluestone and book and lyrics by Eileen Bluestone Sherman, met with the press at Sardi’s for a special sneak peek for this new musical about Norman Rockwell produced by Joshua Sherman. Norman Rockwell captured the essence of Freedom of Speech, Freedom of Worship, Freedom from Want and Feedom from Fear in his simple everyday scenes.  This musical celebrates the 75 Anniversary of the famous oil series original printing in The Saturday Evening Post and recognizes the current relevance of these four essential human rights. 1942 was the year in which illustrators enjoyed celebrity status and Rockwell was the superstar. Too old to enlist he still wanted to do his part and so volunteered his services to the War Department to paint a series of posters inspired by FDR’s Four Freedoms Speech. But he was rejected!

Perfect Picture explores Rockwell’s life, his marriages and loves, insecurities and resilience. It’s an extraordinary story of his quest to create the 4 Freedoms suite with a portrait of the artist whose life was anything but perfect.

Perfect Picture will play The Arkell Pavillion at the Southern Vermont Arts Center in Manchester, Vt. July 20-21 and is the cornerstone of the 4 Freedoms Festival  www.TheMillVt.com/4freedomsfestival/