PETE MALINVERNI TRIO at The Django 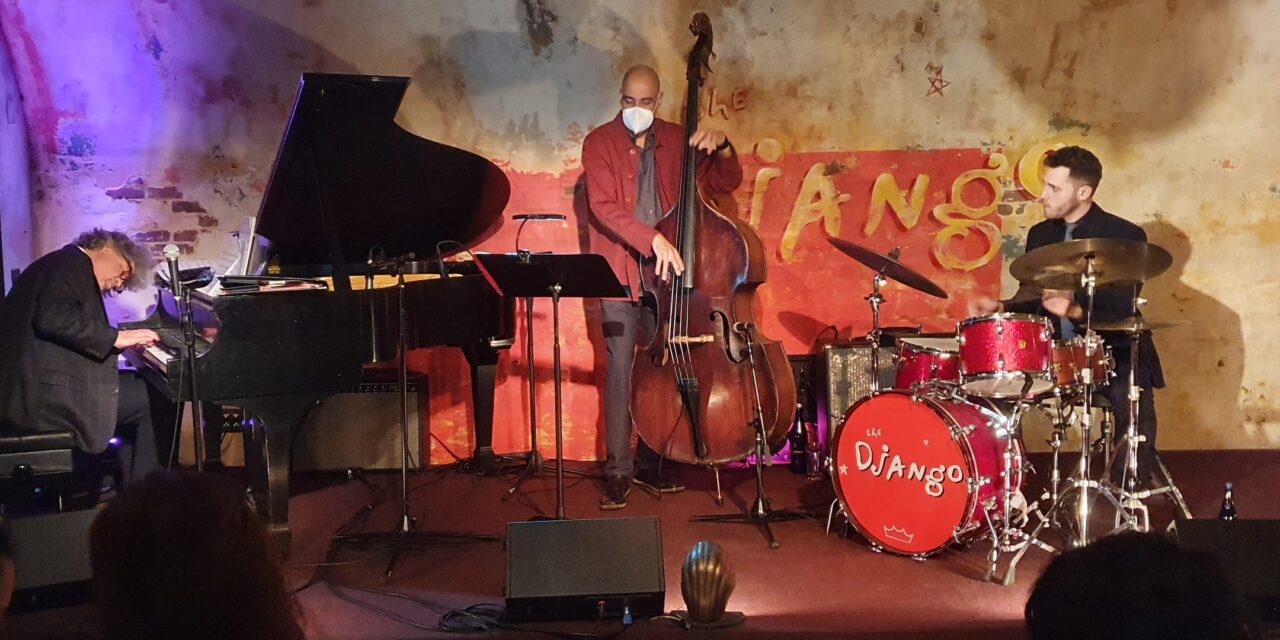 Pete Malinverni, a well-respected jazz pianist, composer and educator who has been on the New York jazz scene for nearly 40 years, brought his trio to one of the most fascinating venues in New York, the Django on February 7.  This gorgeous, vaulted, underground club at Tribeca’s Roxy Hotel makes one feel as if they’ve beamed into Paris, circa 1961.  It’s a perfect spot for an evening of cool jazz.

Malinverni is as comfortable leading a trio as he is accompanying singers like Anais Reno.  Tonight’s two sets comprised the CD release event for Malinverni’s new CD, “On the Town:  Pete Malinverni plays Leonard Bernstein,” which celebrates the music of the legendary composer and conductor Leonard Bernstein.  Both sets tonight focused on Bernstein’s New York-centric Broadway tunes, mainly from the pair of shows written with lyricists Adolph Green and Betty Comden, On the Town and Wonderful Town, as well as several from West Side Story, with lyrics by Stephen Sondheim.

Malinverni was backed by two excellent musicians in Ugonna Okegwo on bass and Aaron Seeber on drums.  Seeber, who did not play on the album, was spectacular, the living embodiment of actor Miles Teller as the ambitious drummer in the movie Whiplash.  J.K. Simmons’ character would likely have given Seeber a thumbs up, or at least not yelled at him.  Malinverni and Seeber were dressed in business suits and ties, while Okegwo wore a reddish-brown shirt that had a remarkable contrast with the painted sign behind him on the Django wall.

The trio opened with “New York, New York” from On the Town.  Malinverni’s playing here was reminiscent of Vince Guaraldi.  The bass pulsated like a washboard, and the tune was peppered with quotes, notably one by bassist Okegwo of the very appropriate “There’s a Boat That’s Leavin’ Soon for New York” from Porgy and Bess.  (When asked about this after the set, Okegwo responded, “Did I?  I might have!”)

“Lucky to be Me”, also from On the Town, featured what might best be described as a conversation between Malinverni and Okegwo.  Seeber then took over the “chat” with a brilliant drum improvisation as Malinverni called out to him and implored, “Stay with that, baby!”

Malinverni started out alone on “Some Other Time,” slowly, before feeling his way to the top, where Seeber came in with a 5/3 rhythm that was, indeed, some other time.  Like Bernstein, who was quite the animated conductor, Malinverni’s physicality is something to behold.  With his large shock of grey hair, Malinverni’s body and facial movements seem to mirror the energy of the music he is playing.  This quality brings much joy to Malinverni’s live shows.  While this was an instrumental set and Malinverni is not a singer, he often scatted to himself, and he sang the verse to “Lonely Town,” off mic.

One of several non-Bernstein pieces was “The Tempest,” an original composition that Malinverni’s very recently deceased mother always requested, and which he has pledged to perform at every show in her honor.  The arrangement, with a cascade of crashing sounds, was the musical manifestation of a tempest, and reached a blazing pace driven by Seeber’s ferocious drumming.  Seeber is a bit of a minimalist in terms of the kit set-up — he used only four drums of the five-piece house kit; one was sitting in the corner of the stage.

A clear standout in the second set was “I Feel Pretty” from West Side Story, played here as a slightly off-center jazz waltz.  If Leonard Bernstein and Dave Brubeck secretly collaborated, with drumming inspired by Joe Morello’s iconic 5/4 mastery on “Take Five,” you might have the Brubeckian waltz heard tonight.  “Cool,” also from West Side Story, deftly captured the feel of the rhythm and dancing from the film.

A pair of additional non-Bernstein songs started with Malinveri’s composition, “Good Question,” a contrafact basted on the chord structure of Cole Porter’s “What is This Thing Called Love,” again with outstanding contributions from Seeber.  A mic-shy Malinveri poignantly sang, the first few lines of “These Foolish Things” (Jack Strachey/Eric Maschwitz), playing solo until he dropped off singing and the trio kicked in.  It ended in similar fashion, with Malinveri singing.  The trio ended the night with a reprise of “The Tempest,” again for his mother.

This was a strong set by the Pete Malinverni trio.  They will be back at The Django on March 2nd with the same lineup.