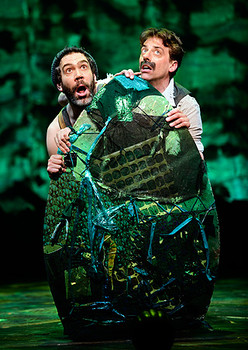 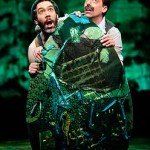 Making its way to the Brooks Atkinson Theatre on Broadway after a run at NY Theater Workshop, there certainly could have been worrisome moments wondering how this whimsical theatrical production would transfer from 200 seats to 1000 seats. No worries! It’s as delightful as ever with some additional scenery and more space. This is still the all-too-clever story of Peter Pan before he was Peter Pan. In this laugh-a-minute prequel, cleverly adapted from a 2004 children’s book by Dave Barry and Ridley Pearson by Jersey Boyslibrettist Rick Elice, you’ll find yourself aboard the SS Neverland with unkempt Boy (Adam Chanler-Berat) and his band of orphans played by Carson Elrod and David Rossmer, all captives on their way to Rondoon.

Molly, the ever enchanting Brit Celia Keenan-Bolger, leads and protects the boys along with the pixie dust her father Lord Aster (Rick Holmes) entrusted to her. While he is away, they communicate through a language ofparrot clicks and clucks speaking to each other through amulets they wear, adding to the comic overtone. She is guarded by her nanny Mrs. Bumbrake (Arnie Burton) who finds love with Slank (Matt d’Amico, who also plays Hawking Clam). The most ingenious part of the production is the staging and less is more scenery designed by Donyale Werle, as the cast maneuvers their way through ropes as frames and rippling sea, using hand-help ships representing the Neverland and Wasp, creatively staged by Steven Hoggett with deftly designed lighting by Jeff Croiter and sound design by Darron L. West.
When the show was downtown, rubber-limbed Christian Borle wasn’t starring in the hit TV series “Smash,” now added to his repertoire. Borle plays Black Stache, who goes on to lose his hand and eventually becomes Captain Hook. He still steals the show, his comic timing and silliness second to none as his brilliance shines throughout. I do believe he has been touched by pixie dust! References to Philip Glass, Ayn Rand, Starbucks don’t go unnoticed as the audiences catches it all. Some of it may go over the head of the kiddies, but they’ll still enjoy the whimsy and theatrical prowess.

The Mermaids (entire cast of 12) who open Act II garner some of the biggest laughs with the all male cast, except for Keenan-Bolger, dressed in bra tops and long skirts as they sway their way through original music penned by Wayne Barker; Borle in bikini top with two vegetable steamers attached that open and close, while others wear anything from plastic bottles to plastic juicers. Delightful clever costume designs by Paloma Young.

With Teddy Bergman as Fighting Prawn, Isaiah Johnson as Captain Scott and Gregg Hildreth as Alf, the cast is perfection. The skillful and clever direction is the winning team of Roger Rees and Alex Timbers.

Catch the star stuff and feel young forever with “Peter and the Starcatcher” at the Brooks Atkinson Theatre on West 47th Street.