Peter Calo – Something for Everyone 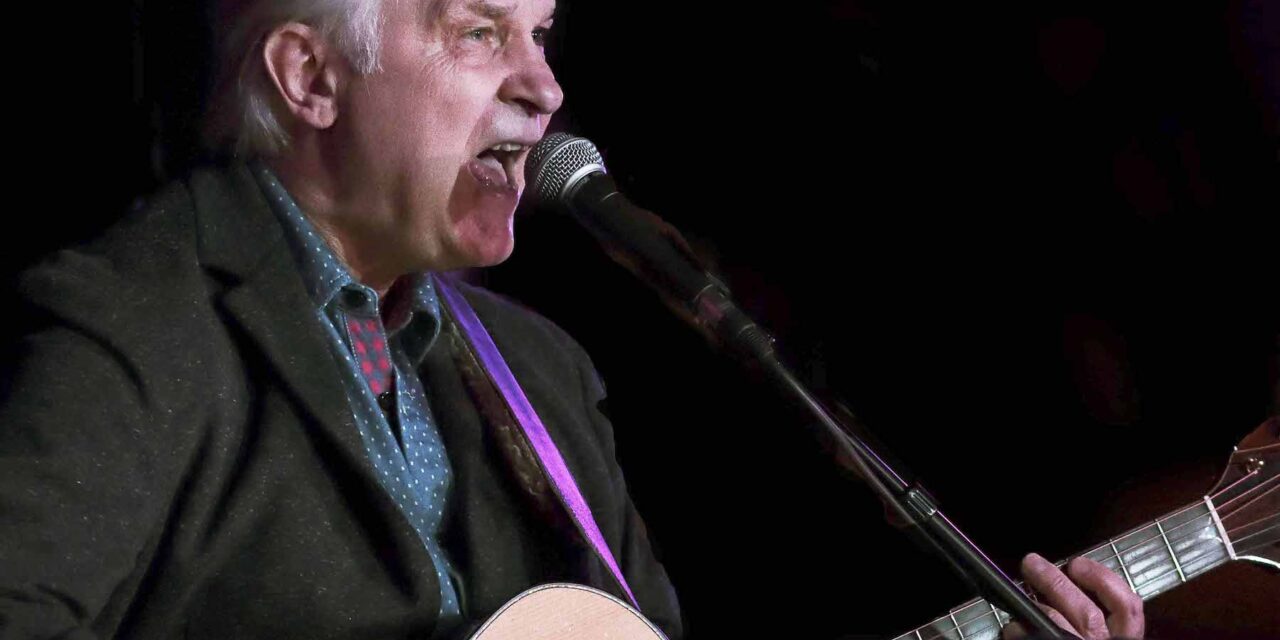 The Canadian-born Peter Calo is one of those super-talented musicians who, while he’s had a successful career both as a solo artist and as a collaborator with the likes of Carly Simon and Jimmy Webb, is not a name everyone knows. The singer/songwriter and ace guitarist first came to this writer’s attention when he accompanied Lorna Luft at the show reviewed here in early April of this year. There, he supplied some swell six-string support for the star, as well as vocal harmony and even a lead vocal. Intrigued, a reservation was made for Pangea.

At Pangea on April 28, Mr. Calo presented an eclectic mix of songs, fully half of which were written by him. The rest were by a diverse selection of pop and rock composers, including Paul Simon, Jimmy Webb, and Carly Simon. The performer displayed his virtuosity throughout the set with a plethora of styles and techniques. Impressively, he accomplished all of this on a standard acoustic guitar, with no effects.

Wearing a casual turquoise shirt, khakis and a dark jacket, the tall singer looks like he could be related to Alec Baldwin. Mr. Calo opened with a fine acoustic arrangement of Leon Russell’s “Tight Rope.”

An original tune, “Full Moon Tango,” was written by Mr. Calo on the way to a gig, after meeting the woman who became his wife. He sang a John Pizzarelli-style “doubling” solo on guitar and voice, until he found himself in a funky groove that the trio picked up on—although it may have only appeared to be an arrangement this loose.

Mr. Calo tried to cajole singer Karen Mack up from the audience to sing harmony with him on his “Way Up on a Mountain,” which they apparently performed together many years ago, but she demurred. He then spoke of his first encounter with Carly Simon, with whom he has since performed, collaborated and recorded. Sitting by the pool with their guitars, he played the opening chords to her “Anticipation.” She asked, “What are the chords?” Even the great composers may forget their own chord changes. Mr. Calo, who has also done session work, has a very precise but effortless style, with nary a missed note in the performance.

While Mr. Calo performed only one song by Carly Simon, he presented “Every Ordinary Day,” a song he wrote when his wife gave birth in Puerto Rico after insisting on joining him on a private plane to the island for a show by Ms. Simon, who joined the couple at the hospital.

With a pleasant, light tenor, Mr. Calo provided solid vocals, with somewhat of a chameleon quality. He does not do vocal impressions, but his voice and style seemed to adjust itself to something similar to that of the performer whose song he was singing at the time. Considering his work as a session guitarist, this is unsurprising. When he needed a powerful vocal, he had it at the ready. Interestingly, his voice had the timbre of a much younger singer. He had an excellent trio, and Gary Schreiner was a triple threat on the accordion, harmonica and piano, in that order—he did not play the piano until the fourth song.

On the Calo original “Do I Love You Too Much?”, drummer Chris Marshak played his kit like they were bongos, and the star performed a terrific acoustic solo.

Mr. Calo has also collaborated with the great songwriter Jimmy Webb, and included his “Wichita Lineman,” which was a huge hit for Glen Campbell, with some delicate guitar chord voicing that helped provide a new take on this song.

After closing the show with a unique medley of David Bowie’s “Space Oddity” and his own “Please, Please, Please,” Mr. Calo did a “faux encore” of the O’Jay’s “Love Train” (Kenny Gamble/Leon Huff), and quite frankly redeemed this pop anthem. The song’s meaning of unity and world peace seemed lost on the original recording, and here it felt almost like a call to arms.

Peter Calo might never be a household name, but he is a fine musician, performer and songwriter who has certainly jumped up my personal Billboard list with a bullet. It will be a pleasure to hear more of him when he’s playing in town.

Peter Calo’s: Something for Everyone was performed April 28 at Pangea (178 2nd Avenue, between East Eleventh and Twelfth Streets). www.pangeanyc.com