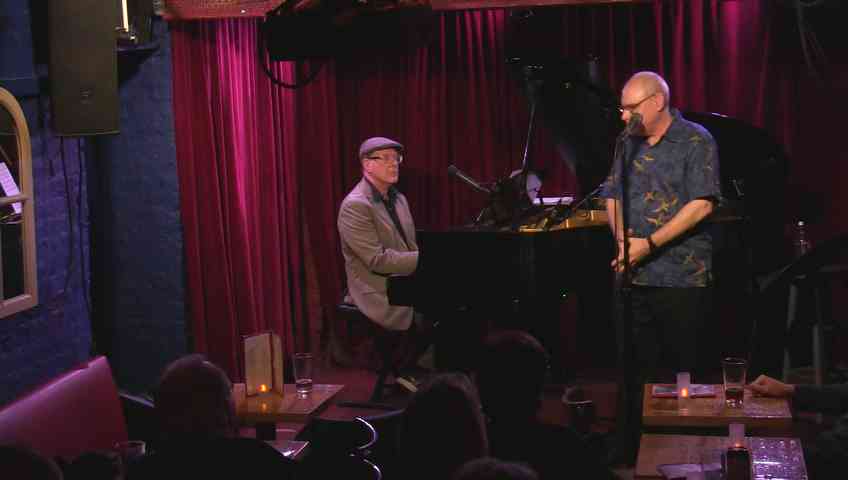 Monk with lyrics you ask? Johnny Mercer in the company of Monk you wonder? Peter Cherches is capable of many musical surprises. He has written lyrics for nearly one-third of Thelonious Monk’s compositions. And he has supplied vocalese for Mercer hits. Sunday, October 9 at the Cornelia Street Café, he sang songs written by both of these geniuses with his own brand of jazz expertise and humor in a ‘50s smooth pop-jazz style inspired by hip singers like Mel Tormé and smooth crooners like Dick Haymes.

At times it was hard to tell which lyrics were Mercer’s and which Cherches’. His lyrics were perhaps a bit more modern but still in the same groove. He began with “Moon River” and “Laura” on the Mercer side and Monk’s “Ruby My Dear” and “Eronel.” The Mercer song “Laura” followed with his vocalese addition involving his crush on the actress Gene Tierney—charming. Mercer himself wrote lyrics for jazz tunes and “Midnight Sun” by Lionel Hampton was performed here. “I’m Old Fashioned” (Mercer) was sung with added playful lyrics such as, “I’m antiquated; carbon-dated . . . regressive with a passion.” “Blue Monk” with Cherches’ lyrics was the Monk high point of the evening. Announced as a “saga,” the story begins with “Should I go here, should I go there . . . indecision’s got me blue.” And continues with a story about a man trying to pick out dinner in the grocery store from the frozen food freezer. “I turned into a pure mass of anxiety.” Variety was too much for this guy. He ran out of the store. The lyrics perfectly encapsulate the uber-neurotic search for satisfaction.

Next was Mercer’s song “I Thought About You,” with vocalese about traveling in a train, “the track told me Jack, you’ll never get back . . . What’ll I do—obsess about you.” “Autumn Leaves” was one of Mercer’s songs from the ‘50s. He found work doing English versions of songs from Europe. Cherches sang “Autumn Leaves” with his near-literal English translation of Jacques Prevert’s original lyric, and followed it with an arrangement of Mercer’s inspired by Miles Davis and Cannonball Adderley.

His partner in crime, Lee Feldman as collaborator and accompanist on piano, is pitch perfect and a great support as well as soloist for the evening—his performance of “Dream” (Mercer) a case in point.

“Skylark” may be one of the most impressive collaborations of a song ever with Hoagy Carmichael’s music and lyrics by Mercer. To end the evening, after Lee Feldman’s eloquent introduction, Cherches very simply gave us an interpretation complete with all the brilliant complication of this song.