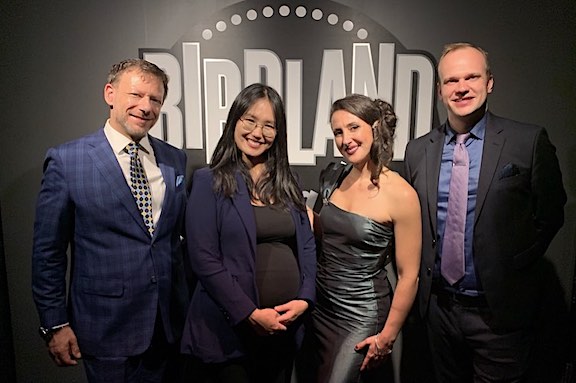 Myriam transported us from Birdland to a French coffeehouse in the time of Piaf.  Myriam has refined the show she performed at Birdland and Joe’s Pub in 2019, with a number of changes to the set list.  Her material was not entirely that of the “Little Sparrow” (Piaf’s nickname), but Piaf comprised 10 of the 14 songs performed, which were sung primarily in French.  Nearly a foot taller than her diminutive (4’8”) idol, Myriam is blessed with a classic Hollywood beauty, and her show is informed by her reverence for the artist and the material.  She exudes elegance and style, but is far from aloof, with a warm smile and big, bright, expressive eyes.

Myriam came out in an exquisite dress that showed off her figure.  Accompanied by Hyunah Park on piano and Elias Bailey (“Big Note Bailey”) on double bass, she opened with “Milord” (Monnot/Moustaki), in French, one of several songs for which Myriam wrote English lyrics where none existed before.  She asked the audience to raise their glasses as she toasted them, “Welcome to Birdland!  How I’ve dreamed of saying these words to a live audience for over a year and a half!”

For Cole Porter’s “C’est Magnifique,” from “Can-Can,” she offered the sizeable Birdland crowd a French lesson.  “When I sing ‘Ooh la la la,’ you repeat it.”  She sang the song rubato with the audience participation, before moving to a faster pace.  When she whispered “Je t’adore” (“I love you”) Bailey playfully called out, “Shut the door!”

Myriam painted a lovely scene in “L’Accordéoniste” (Michel Emer).  One could almost see the French café, as a very pregnant Hyunah Park (in her ninth month) played accordion, the instrument resting on her belly.

She brought out Grammy winner Linus Wyrsch to play clarinet on two songs, including a Piaf song with Myriam’s English lyrics (“L’Effet Que Tu Me Fais”).  Linus was given great room to swing, and his Pete Fountain-like playing brought a real jazz feel to the evening.

“I’m in love,” Myriam confessed.  Describing her love as round, with a brown bottom, it turned out her love was for the bass, an instrument she started playing a few years ago, with help from Bailey.  She played bass and sang on “Les Amants d’un Jour” (Monnot/Delécluse/Senlis), with Hyunah Park accompanying.  Myriam brought great passion to “Padam… Padam” (Glanzberg/Contet), evoking a long-lost love.

Myriam slowed it down considerably for “Les Feuilles Mortes” (Kosma/Prévert/Mercer), first as a rubato ballad, then a slow, 2/4 swing.  Myriam, perhaps spurred on by Elias’s strong bass solo during the instrumental break, took her biggest vocal chances of the evening, and hit her targets.

The French love their waltzes, and the 3/4 beat found its way to a number of songs this evening.  The final song before the encore was a march.  For “Non Je Ne Regrette Rien” (Dumont/Vaucaire), Myriam sang powerfully, and, with a wave of her hands, she had a look of determination, as if she were defiantly marching on.

For a fun encore of “C’est Si Bon” (Betti/Hornez), Myriam brought up Linus Wyrsch again.  She had the audience calling “Si Bon, Si Bon” back to her, and for the second half of the song, it evolved into a showcase for the immense jazz prowess of her three musicians, with Park, Elias and Wyrsch trading terrific solos.

While much of the lyrics were sung in their original French, it was akin to seeing a French opera sans subtitles, yet still getting the gist of the plot, thanks to Myriam’s ability to convey emotion.  Myriam is a fine singer and storyteller, and is a laudable keeper of the Piaf flame.  Though her intonation occasionally falters in the break between “chest voice” and “head voice,” her charming French style and joie de vivre” somehow make even those few moments delightful.  “Vive la France!”