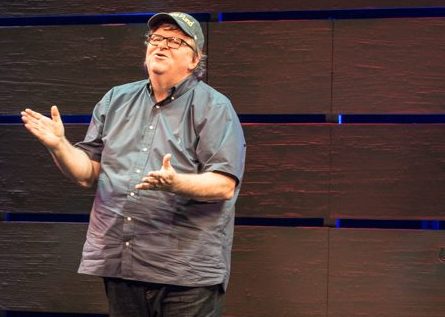 With red, white and blue-clad drummers and much fanfare, Michael Moore’s Broadway debut, The Terms of My Surrender, opened at the Belasco Theatre Thursday, August 10.

The play, a subversive examination of contemporary American politics, is directed by Michael Mayer and includes a revolving shift of celebrity guests. Opening night’s special participant was Gloria Steinem.

After the play a march from the Belasco to Bryant Park preceded the opening night party at the Bryant Park Grill. Theater Pizzazz’s JK Clarke was on hand to capture the festivities.