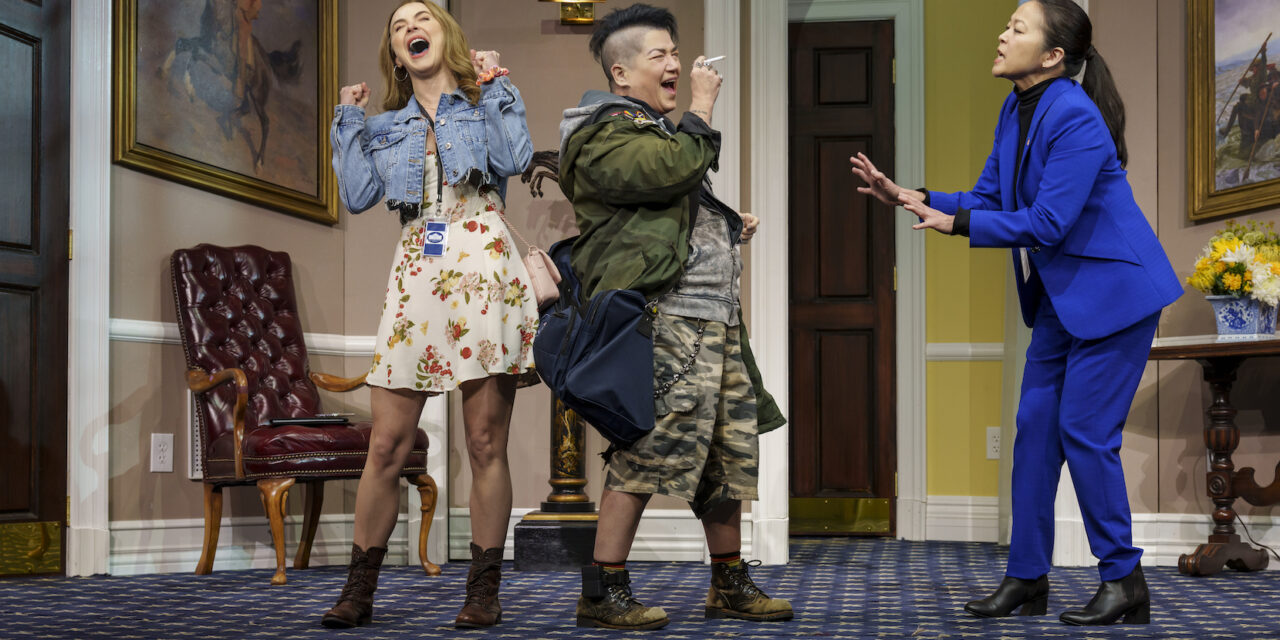 The rock music blasts, the curtain rises, and the race (I mean show) is on at Broadway’s Shubert Theatre. We’re watching Selina Fillinger’s political farce, POTUS: Or, Behind Every Great Dumbass Are Seven Women Trying to Keep Him Alive, which takes us inside the White House as Harriet (Julie White, Tony winner for The Little Girl Laughed), POTUS’s chief of staff, and Jean (Suzy Nakamura, HBO’s “Avenue 5”), his press secretary, are hollering like holy hell about how to handle the horrendous gaffe he just committed. At a meeting attended by members of the press as well as three Chinese diplomats the President of the United States said, “Please excuse my wife’s absence. She’s having a cunty morning.”

Thus begins the shouting match—I mean vigorous debate—as POTUS’s female enablers engage in damage control, setting off the high decibel hijinks that will occupy them and five other women in POTUS’s milieu for the rest of this rumbustious two-act, hour and 45 minute romp through the White House’s offices, bathrooms, waiting and press rooms.

Those other five include Stephanie (Rachel Dratch, “SNL”), his goofy, insecure, multilingual secretary, who fears her job is on the line. Dusty (Julianne Hough, Safe Haven), POTUS’s young “dalliance,” a hottie whose name launches a thousand jokes, is pregnant with his baby. Bernadette (Lea DeLaria, “Orange Is the New Black”), is POTUS’s egregiously butch sister, temporarily released from prison and expecting a pardon. Then there’s Chris (Lilli Cooper, Tootsie), a black journalist lactating like Elsie the Cow, her mission being to interview Margaret (Vanessa Williams, The Trip to Bountiful), the white POTUS’s Black First Lady (or FLOTUS). Margaret is so anxious to downplay her much-vaunted elegance and accomplishments that she wears Crocs to make her seem “earthy.” As she says, “You think when I gave my speech as Valedictorian I said, “One day I will walk the halls of the White House in shoes that can double as flotation devices?”

Perhaps some will see POTUS as a feminist screed revealing how superior women are to men at handling issues of import. Don’t buy it. These women are simply meant to get laughs, no matter how silly or sexually objectified that makes them. Dusty, for example, agrees to blow a pair of Secret Service agents as part of a scheme the women hatch. A comic highlight comes when she discovers, too late, that the men she orally serviced were a pair of wounded Iraq War vets.

Occasionally, there’s a confluence of public events and theater in which someone speaks a line that resonates in a way never intended when it was written. This happened at the Wednesday matinee I attended, a day after the draft of Justice Alito’s anti-abortion Supreme Court ruling was leaked. Midway through, when Dusty says, “I volunteer at a clinic back in Iowa. Affordable, safe reproductive health care is a basic human right,” the Shubert audience burst into sustained applause, lasting perhaps two minutes! Think for a second, though, how those words would float in Iowa.

Susan Stroman (The Producers), one of New York’s foremost musical theater directors, has staged POTUS as if it requires all the razzmatazz dynamism of a splashy musical comedy. (The company even does a song and dance during the curtain calls.) The result, however, is more fun than funny. No one can dispute the energetic talent and enthusiasm of Ms. Stroman’s first-rate cast, all of them terrific (although, for my money, Julianne Hough’s breakout performance steals the show). But under Ms. Stroman’s frenetic helming, the actors start off with such a bang that, loud and over-the-top as they are, they have no leeway other than to get louder and more over-the-top.

Farce shouldn’t be a contest for who can be funnier than who. It needs finely honed characterizations that, necessarily heightened for performance, should be rooted in believable persons desperate to achieve their objectives, but trusting enough in their material to let the humor emerge naturally. POTUS clearly has potentially hilarious lines and business, but, apart from a few scattered moments, I was surprised to find myself smiling when I should have been peeing in my pants. Watch another political satire, TV’s “Veep,” for comic characterizations that, while lightly exaggerated, nevertheless seem truthful in the given circumstances. There are a few such moments in POTUS, but the overall impression is of pushing rather than patience.

Set designer Beowulf Boritt makes a memorable contribution by placing the show’s multiple scenes on a revolving stage, nearly all of them pie-shaped units created in forced perspective, allowing the action to move breathlessly from locale to locale. Lighting designer Sonoyo Nishikawa lights it all brightly (you may have to shield your eyes when the show begins), Linda Chō’s costumes are consistently character-worthy, and Jessica Paz’s sound design helps keep the atmosphere fizzy.

Each element participates in gilding the humor, but, for all the mild pleasure POTUS provides, I’d vote for it more for the two minutes of unrelated applause it invited than for how much laughter it provoked.

POTUS. Through August 14 at the Shubert Theatre (149 West 45th Street, between Seventh and Eighth Avenues). www.potusbroadway.com 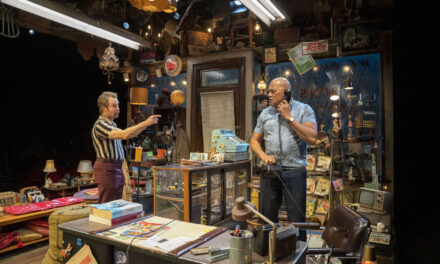