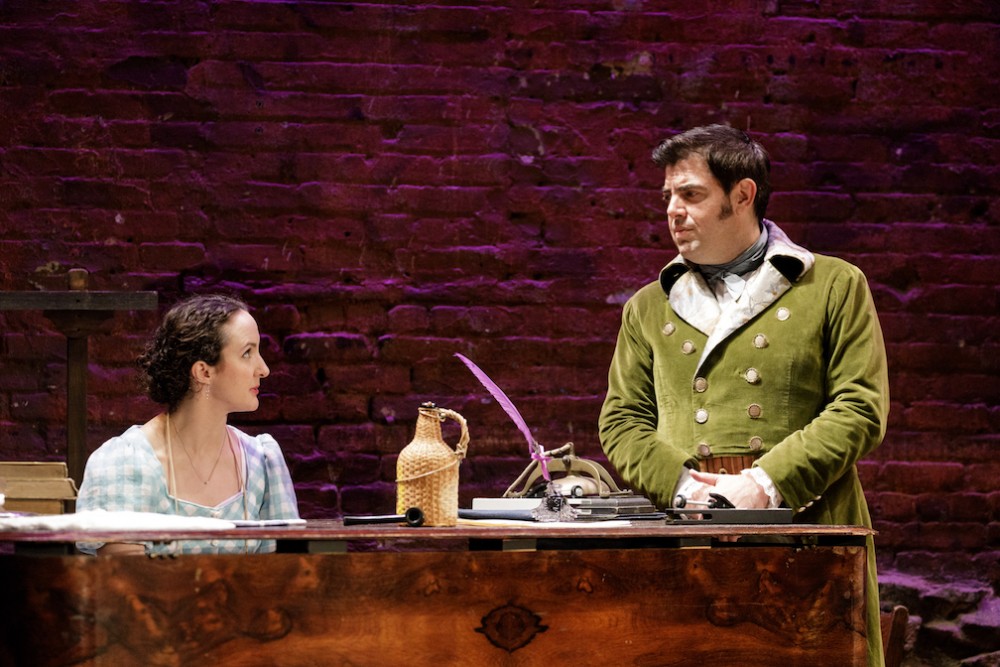 At this point it’s fair to call Kate Hamill a one-woman cottage industry of theatrical interpretations of 19th century English Literature classics. Starting with the highly acclaimed and award-winning Sense and Sensibility, produced by Theatre Bedlam (and which will be produced by the Oregon Shakespeare Festival in 2018), followed by last year’s Vanity Fair in conjunction with the Pearl Theater Company,  and now her latest, Pride and Prejudice—now playing at The Cherry Lane Theater, produced by Primary Stages in conjunction with the Hudson Valley Shakespeare Festival—Hamill has cranked out winner after winner. Her joyous, lovingly painted adaptations of cherished romances are everything fans of these novels could possibly hope for.

For some, the memory of trying to tackle Jane Austen’s masterpieces of English literature in their high school years is a memory fraught with peril. For others it is evocative of a time of joy and discovery. But, in the same way that ABC Television’s animated educational series “Schoolhouse Rock” made civics and government lessons palatable to school-aged children of the 1970s, Hamill’s plays take the stuffiness out of English literature—often by injecting more levity—and provide access to those who couldn’t bear to “go there,” and were missing out on magnificent universal stories of love and its inherent disappointments. Pride and Prejudice is the story of the Bennets who, represented most enthusiastically by the anxious Mrs. Bennet (Nance Williamson)—whose philosophy is best represented by the notorious narrative line, “It is a truth universally acknowledged that a single man in possession of a good fortune must be in want of a wife”—desperately want to marry off their five daughters, preferably to wealthy men. The overarching reason being that these daughters are not, because of a legal hitch, entitled to inherit Mr. Bennet’s (Chris Thorn, who also plays Charlotte Lucas) property, and without husbands, they will be destitute. The play centers around the daughters’ various encounters with local suitors, both appealing and . . . unsuitable.

As in Sense and Sensibility, Hamill’s new play has turned the original story into a farcical, hilarious romp, while earnestly maintaining the integrity and desperate exigences of Austen’s original. Mixing in modern touches and winking cultural references and austere (yet slapdash) period costuming and set components (an old piano the girls play on, rocking chairs), the classic story feels fresh and updated, opening with a set piece of the ensemble awkwardly singing and dancing to the 1965 Wayne Fontana and the Mindbenders pop ditty, “The Game of Love.” Other contemporary cultural references sprinkled in elicit recognition, laughs and connectivity to a multi-generational crowd—it’s a great device to keep even the most distracted audience member on his toes. There are even characters who are a direct connection to beloved figures from popular films, like the deceitful and superficial Mr. Wickham portrayed by Mark Bedard as Dr. Evil from Mike Myers’ iconic Austin Powers’ movie franchise. But even with all these endearing touches to Ms. Hamill’s play and Amanda Dehnert’s direction, the most compelling component is a collection of terrific comic performances. Most notably John Tufts as Mary, the unattractive, disturbing and most unmarriable sister, who brings to mind a gothic Wednesday Addams with a long, morose bang hanging across her face; and the lovelorn Bingley, who can only be described as a Golden Retriever, sporting a large bow and enthusiastically fetching his beloved Jane unnecessary household items in hopes of some reward, even as small as a pat on the head. Meanwhile, Hamill as Lizzy and Jason O’Connell as Mr. Darcy are about as believable as you can get as romantic leads, for they are indeed a couple in real life and both their love and restraint show through on the stage. In the performance I attended, Hamill seemed to suffering from the after affects of the same flu that many in the audience had also endured, and erupted into a severe coughing fit (which she managed with aplomb) at a particularly poignant moment of the script. As both Mr. Darcy and himself, O’Connell’s deep concern and compassion for Hamill was opportunistically tender and touching.

With now three successful and entertaining interpretations of 19th century classics to her credit, it’s high time to celebrate Kate. She has proven herself a master of this craft and should now be celebrated as such, especially when it comes to awards season. And one looks forward with great anticipation to her next work (reported to be Louisa May Alcott’s Little Women). In the meantime, Pride and Prejudice is the perfect play for the entire family, especially a teenager who’s not enthused at the moment to have to read the story for school; or for that matter anyone with a special love for the classics who’d like to see a fun and lovingly told version of an old favorite.

Pride and Prejudice. Through January 6 at the Cherry Lane Theatre (38 Commerce Street, between Bedford and Barrow Streets, Greenwich Village). www.cherrylanetheatre.org 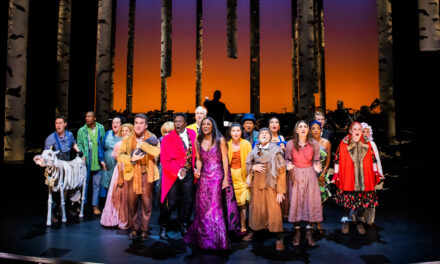 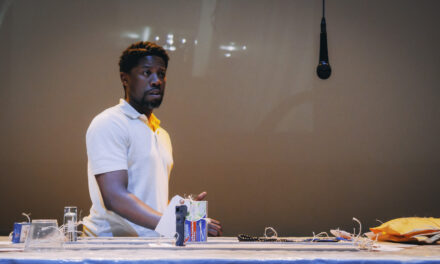 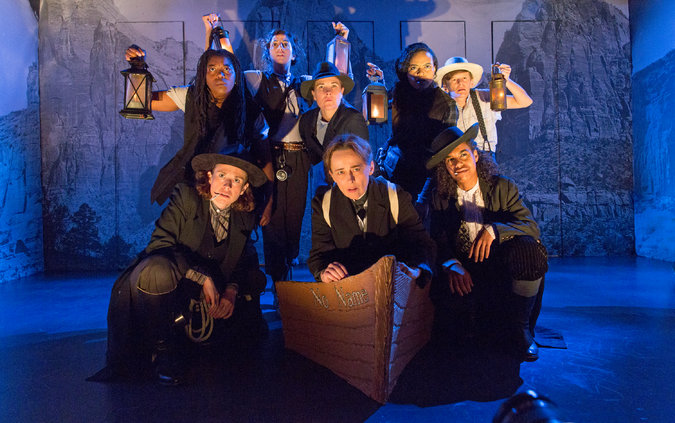