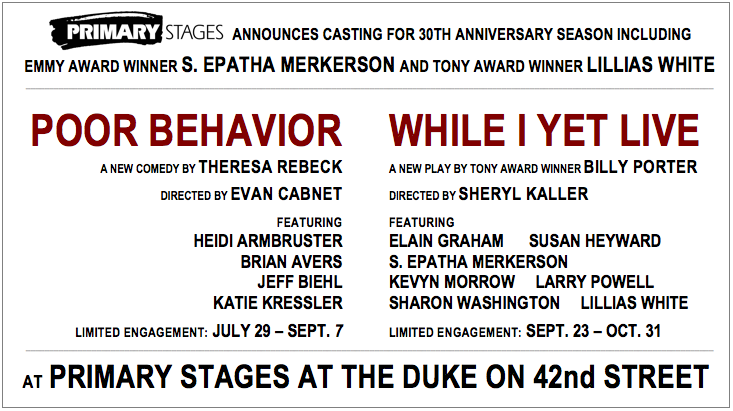 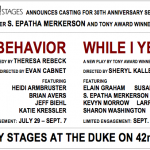 For the second production of the season, Primary Stages presents While I Yet Live by the Tony-winning star of Kinky Boots and Angels in America, Billy Porter, and directed by Tony Award nominee Sheryl Kaller (Mothers and Sons, Next Fall, Adrift in Macao). This new work about a young man’s coming of age in Pittsburgh amongst a bevy of fascinating and strong-willed women features Elain Graham (The Picture Box, “Smash”), Susan Heyward (The Trip to Bountiful, Ruined), Emmy Award winner S. Epatha Merkerson (Come Back, Little Sheba; “Law & Order”), Kevyn Morrow (The Scarlet Pimpernel, Dreamgirls), Sharon Washington (The Scottsboro Boys, Wild With Happy), Tony Award winner Lillias White (The Life, Fela!), and Larry Powell (Broke-ology, Dutchman). While I Yet Live features a scenic design by Adam Koch, costume design by ESosa, lighting design by Kevin Adams, sound design by Leon Rothernberg, and casting by Stephanie Klapper Casting. While I Yet Live runs September 23 – October 31. Opening night is Sunday, October 12 at 7PM.

For the final production of the season, Lives of the Saints, Primary Stages reunites David Ives and John Rando, writer and director of All in the Timing, for this world premiere collection of delightfully funny and unforgettable short plays including New York premieres and a couple of World Premieres. Casting is TBA. Primary Stages will produce its 30th Anniversary Season (2014/15) at The Duke on 42nd Street (229 West 42nd Street).