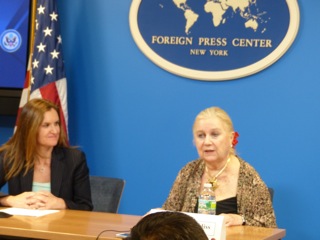 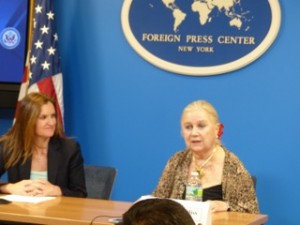 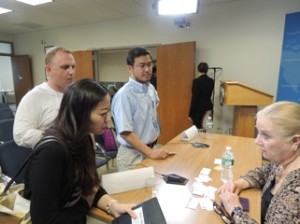 On June 27th, correspondents from foreign publications worldwide attended an afternoon at the UN Mission to listen to what is happening in the capital of entertainment, New York City. They had questions and concerns which were eagerly addressed by Cristyne Nicholas, former President and CEO of New York & Company, the City’s official tourism and marketing organization, and who has spent her career in politics, marketing and tourism. She was able to offer many statistics regarding the numbers of visitors who come to the Big Apple and specifically how many from what countries, addressed the impact of 9/11 on Broadway and the more recent effects of Hurricane Sandy on the economy of tourism.

Producer Pat Addiss  (currently – Vanya & Sonia & Masha & Spike, A Christmas Story, Buyer & Cellar), offered up much information on the various shows, on and off Broadway, those suitable for children and the fact that the common denominator for foreign visitors coming to theatre is always a musical.

Questions ranged from: Are producers influenced by foreign visitors when they’re bringing a show on or off Broadway; what about shows that appeal to minorities (African-Americans, Chinese, Russians). A major concern, of course, is the rising cost of a ticket to a Broadway show and how to attract a younger audience at those price levels.

Ms. Addiss stressed the fact that looking towards change in how theater will eventually be presented, is a key element.  The new trends toward interactive theater, smaller venues and lowering the cost of productions can help. The future of theater is in attracting new and younger audiences.