Professor Irwin Corey’s 100th: The Social Event of the Century 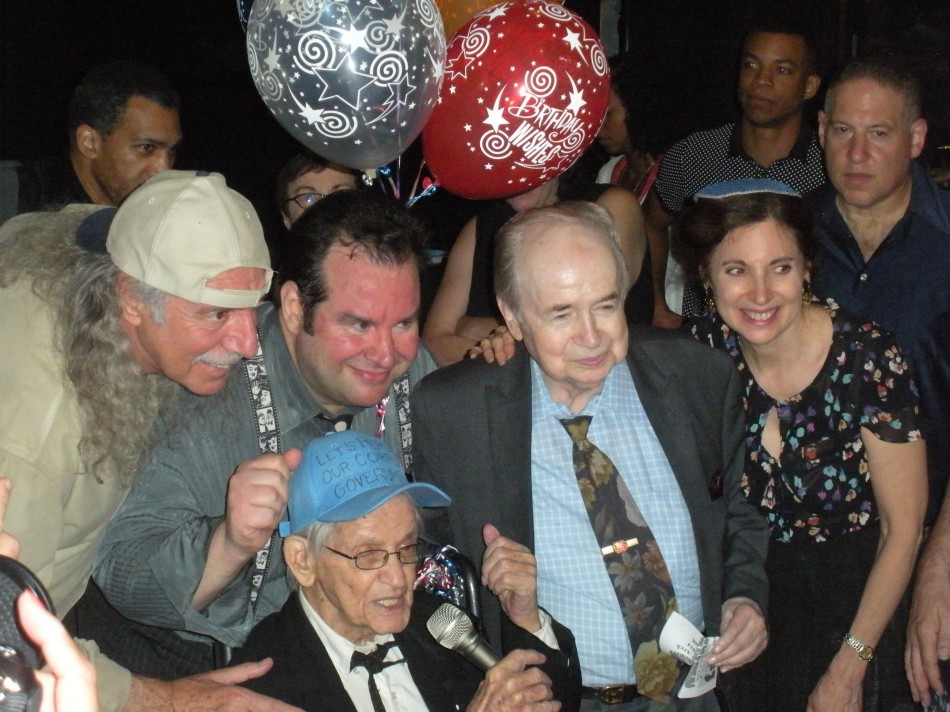 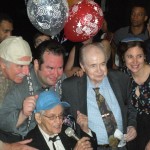 On Tuesday night, July 29th, friends, fans, and folks who just wanted free Sarge’s cheesecake, jammed the Actors Temple on West 47th Street to honor, kvell and celebrate Professor Irwin Corey’s 100th Birthday. In case you’re unfamiliar with the greatness of this comedy legend, aka the World’s Foremost Authority, Irwin is a man of many words, mostly multisyllabic and unintelligible. He’s eloquent in his command of vocabulary and incoherent through his abuse of it. Watch him in action performing a set at age 97! in Chicago.

Irwin’s centennial celebration was Actors Temple Rabbi/Cantor Jill Hausman’s idea. Rabbi Jill took actor/comedian Bob Greenberg, who organizes the Temple’s benefits, with her to present the idea to Irwin and ask for his OK. “Rabbi Jill, being a hot-looking rabbi, perked up Irwin’s interest immediately and they sealed the deal with a kiss and a hug,” Bob reported. Bob assumed that Irwin’s caricature already hung at Sardi’s, but was told by Irwin it never happened because he’d outlived the artist. Unfortunately Sardi’s was no longer interested in hanging Irwin, so Artist/Cartoonist Gene Williams supplied a great sketch of Irwin which was not only framed and portable but could be put up wherever Irwin would be performing.

Invitations to The Actors Temple Pot Luck Open House Irwin Corey Centennial Celebration were emailed and tweeted. How many folks showed up? More than you’ll find praying at most synagogues even on Yom Kippur. Sarge’s on Third Avenue, Irwin’s favorite deli and the closest one to his domicile, contributed three cheesecakes, comic Mike Fine supplied a birthday cake and other guests brought gifts and provided enough other goodies to last the night. Bob Greenberg hosed Irwin down and dressed him in his performing outfit – a black tailcoat, a string tie and black Converse high top sneakers. Was Irwin alert and in the moment? We should all be half so alert, responsive and hilarious when any of us are half Irwin’s age.

Celebrities attending included Kenny Kramer (who snuck into the Village Vanguard at the age of 14 to watch Corey perform), Gilbert Gottfried and his lovely wife, Dara, Comedy Matters’ Jeffrey Gurian, the they-don’t-look-a-day-over-70 nonagenarians Edith and Irwin Drake (cashing royalty checks for Good Morning Heartache and It Was a Very Good Year keeps them young), and talk show host, Joe Franklin, who set the standard for TV shows by interviewing over 100,000 guests during his 43 year broadcasting career and revealed that Irwin Corey had been a guest on his shows about 100 times which began in the days “when the Dead Sea was only sick.”

How funny is a hundred year old comic? Very funny. Some of his more recent witticisms?

“I went to the hospital and they took my blood and they said you’re so old, your Blood type has been discontinued.”

“Marriage is like a bank account. You put it in, you take it out, you lose interest.”

“10 years ago we had Bob Hope, Johnny Cash and Steve Jobs. Today? We have no hope, no cash, no jobs.”

In the words of a classic Jewish blessing: May you live to 120, Professor, and may we all be there to celebrate with you then again!