Queen of Cabaret Julie Wilson Has Passed On

It is with great sadness that Theater Pizzazz writes of the passing of the Queen of Cabaret, JULIE WILSON.

She died April 5, 2015 after a stroke she suffered on March 26th as she was getting ready to attend the MAC Awards. Julie was a pillar in the cabaret community, always there for everyone. She loved and was loved by all. Her generosity of self and spirit was ever-present. The last two years she was fortunate enough to have the lovely, caring Debbie Damp always at her side, as they attended cabaret shows nightly.

Here is Julie singing at my husband Bob’s 80th Birthday party with maestro Barry Levitt at the piano. 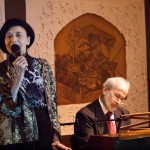 Jullie May Wilson was born in Omaha, Nebraska October 21, 1924 and is survived by her son Holt McCallany, a television and film personality.

She made her Broadway stage debut in the 1946 revue Three to Make Ready. In 1951, she moved to London to star in the West End production of Kiss Me, Kate and remained there for four years, appearing in shows such as South Pacific and Bells Are Ringing while studying at the Royal Academy of Dramatic Arts. She returned to New York to replace Joan Diener in Kismet. Additional Broadway credits include The Pajama Game (1954), Jimmy (1969), Park (1970), and Legs Diamond (1988), for which she received a Tony Award nomination as Best Featured Actress in a Musical. She also toured in Show Boat, Panama Hattie, Silk Stockings, Follies, Company, and A Little Night Music.

In 1957, Wilson sang with Ray Anthony and his Orchestra, contributing vocals to a number of songs in the soundtrack to the film This Could Be The Night. Wilson also had an acting role in the film, as singer Ivy Corlane.

Wilson’s television credits include regular roles on the American daytime soap opera The Secret Storm. She also appeared in a Hallmark Hall of Fame telecast of Kiss Me, Kate and numerous episodes of The Ed Sullivan Show.