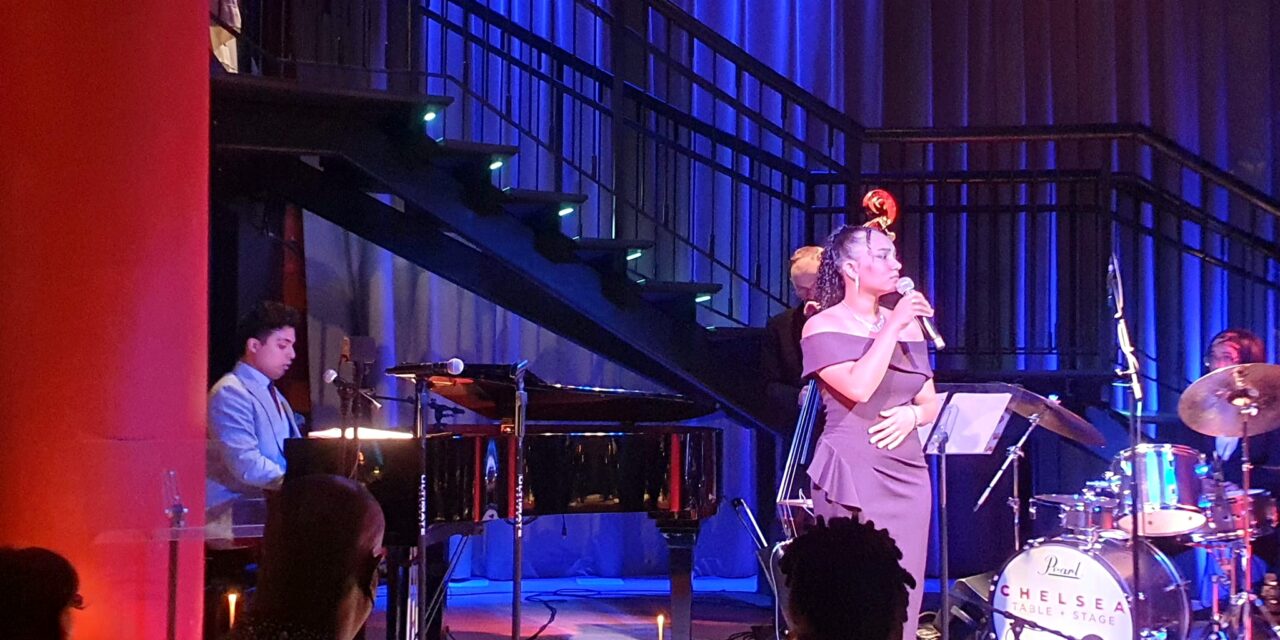 The Quintin Harris Quartet made their first appearance at Chelsea Table + Stage with a fine debut set. The Quartet was actually a trio. He was backed by Sam AuBuchon on bass and Marlen Suero-Amparo on drums. Pianist and singer Quintin Harris first came to this reviewer’s attention with the vaudeville-style act he performs with lifelong friend Bryce Edwards, Mr. Harris and Mr. Edwards (reviewed here).  The talented young Quintin (only 22) is also an accomplished traditional jazz pianist, as he ably proved with his trio of musicians.  Quintin’s girlfriend, singer Emily Lucas, was the featured vocalist on five of the dozen songs in the set.

The trio opened with a swinging “Alone Together” (Arthur Schwartz/Howard Dietz), on which Quintin sang the vocals.  Quintin is an excellent singer with a smooth baritone. His singing and playing here was superb, and this number ought to be recorded. (It’s been a bit of an earworm since this show.)  After this opening number, he largely kept to the instrumental side for the set.

Quintin introduced Emily Lucas to sing “Sweet Pumpkin” (Ronnell Bright).  She did a great job on this.  Emily, who attracted quite the vocally fervent retinue of supporters to Chelsea Table+Stage, has a warm middle register and a way with a lyric.  Of note, Emily, as well as Quintin and his musicians, are music students at William Paterson University in New Jersey.  The music department head was in attendance.

The trio’s pure instrumental of Henry Mancini’s “Days of Wine and Roses” was a nod to the famous Oscar Peterson arrangement.  Starting with a sizzling bass solo by Sam AuBuchon, the trio “traded fours” and really showed off their chops.

The trio did a pair of songs to feature the excellent drummer Marlen Suero-Amparo and bassist Sam AuBuchon, respectively.  Particularly notable was their take on the Oscar Pettiford tune “Tricotism.”  This number had that “late night jazz” feel.  An especially rhythmic and melodic bass lead by Mr. Aubuchon was followed with a skillful unison segment of piano and bass.

Emily brought up guest vocalist Rea Hyseni for a jazzy duet of “Lullaby of Birdland” in honor of Charlie Parker’s 102nd birthday.  The women first traded verses, before singing some terrific and playful scat exchanges.

Quintin and Emily, who had never sung a duet in a gig before, did a lovely job on “A Sinner Kissed an Angel” (Mack David/Larry Shayne).  It was a touching moment, and they will be a couple to watch for in the future.  Emily’s best work came on the “rare cut,” If You Never Fall in Love with Me” (originally known as “Del Sasser” as a Cannonball Adderley instrumental by Sam Jones).

Though the encore of “Route 66” (Bobby Troup) seemed to be unplanned, it was a highlight of the set.  The trio, along with Emily Lucas and Rea Hyseni, really cut loose with terrific solos and scatting.

Quintin Harris has a lot going for him.  He knows his stuff, has great musical ability, and surrounds himself with excellent personnel and guest vocalists.  Harris’s charts are first-rate.  Their first appearance at Chelsea Table + Stage was a success.  Still, he might make sure he has a few more solo vocals in his next show, because that cat can sing!