Reeve Carney Resumes His Residency at The Green Room 42 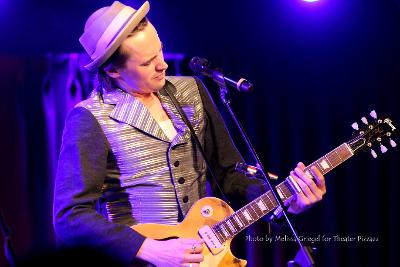 Reeve Carney (Hadestown, Spider-Man: Turn Off the Dark) is a familiar face at The Green Room 42, where he has a huge following. The room was definitely packed with Carney fans at the 9:30 pm show on August 8, most of whom also attended Carney’s fellow Hadestown castmate and girlfriend Eva Noblezada’s (Hadestown, Miss Saigon) 7 pm show. Carney mentioned Noblezada numerous times during the show, as she sat at a center table and beamed at him.

For Hadestown fans, it is easy to see why Carney is comfortable in his role as Orpheus. There is a similar quirkiness, love of music, and social awkwardness to both that makes the character of Orpheus so lovable, and makes Carney adored by his fans. He repeatedly thanked us all for coming and would tell bits of stories about his life, sometimes trailing off with a shy laugh and launching into a new song.

With one exception, all the songs were original songs written by Carney. The son of musicians, he grew up going to blues and jazz clubs in Los Angeles and attended an academy of music for high school. He shared that he never acted in any of the school musicals, but rather played in the pit orchestra.

Before starting his solo music career, Carney was in a jazz-infused rock band self-titled Carney. He sang the title song “Mr. Green” from their debut album Mr. Green Vol.1 and explained that his song was inspired by the board game Clue. Songs from his 2016 debut solo album Youth is Wasted included “Father’s House”, “Intention”, and “Resurrection”, the latter of which won “Best Song – Rock or Hard Rock” at the 16th Annual Independent Music Awards.

When Carney plays music he plays it with his whole body and soul, whether it is the guitar, the piano, or even the kazoo. He puts his whole self into it, closing his eyes, and playing with passion. He loves to experiment with sounds and with vocalization. During the pandemic, he experimented with electric guitar pedals and preamplifiers to try to re-produce the sounds he heard as a kid in blues and jazz clubs. He designed and hand-built new products that he now sells as part of his new company The Quarantine Effects USA.

The song he chose to sing that was not an original song, or as he sheepishly said, “Well it is an original song, of course, it’s just not my original song” was “Life on Mars?” by David Bowie. He felt the lyrics hit home during the pandemic. As the show came to a close, Carney announced that he will be returning to his role as Orpheus in Hadestown and that rehearsals were starting the very next day. Check out The Green Room 42’s website for more opportunities to see Reeve Carney. His next show is on August 22, 2021. www.TheGreenRoom42.com