Why Reinvention Works: The Act at 54 Below 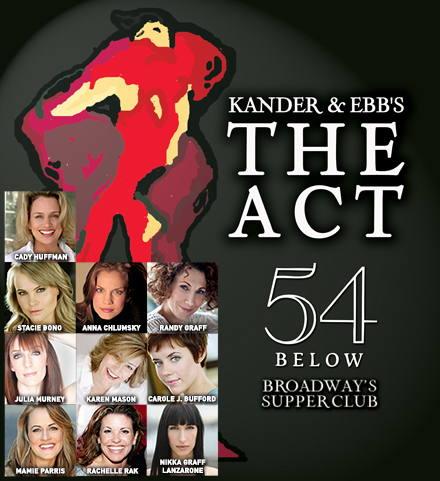 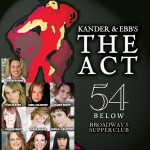 Kander and Ebb’s The Act opened at the Majestic Theater on Broadway on October 29, 1977 – and flopped. The show was a vehicle for Liza Minnelli who hadn’t had her own Broadway outing for 12 years; it centered around a washed up Hollywood star and her autobiographical Las Vegas nightclub act (the book is by George Furth). Critics agreed, despite the high-powered Minnelli, The Act came up short. Even with six Tony nominations and a win for its star, the show closed after 233 performances, never to be seen again.

Yet, despite the crash-and-burn history of The Act, its music is beloved by many. Will Nunziata, the singer and recording artist who’s finding his feet as a director, is such a one. His dream of staging a concert version of The Act with a different diva interpreting the songs that Liza sang all by herself, works like a charm. Stripped to it’s bare musical bones, John Kander’s music shines: each tune the perfect treasure box for some of the most profound and literate lyrics of Fred Ebb’s career.

Each of the divas (dressed in combinations of red and black) – Tony winners Cady Huffman and Randy Graff, Emmy nominee Anna Chlumsky, and Julia Murney, Karen Mason, Nikka Graff Lanzarone, Stacie Bono, Rachell Rak, Mamie Parris and Carole J. Bufford  ­– brought her own experience and sensibilities to the music. The result was a rich tapestry of interpretation made of great depth and complex texture.

The Act’s opening song, “Shine It On” and closing number, “Walking Papers,” were sung with clarity by Nikka Graff Lanzarone. Cady Huffman, leaping on the piano to begin “Arthur in the Afternoon,” didn’t disappoint with her high-power, high-energy, and jocular take on this comic-relief, sex-in-the-afternoon tune. “City Lights,” was beautifully sung by the bright Carole J. Bufford. Shedding a raincoat to reveal a shimmering cocktail dress and moving around the audience confidently, Bufford demonstrated an underlying acting ability that perfectly informed the song’s meaning.

The “Boys and Girls” of The Act, the gypsies, Elizabeth Ann Berg, Jennifer Malenke, and Will Porter, had their turn to shine in the only number not written for Minnelli,  the gypsies’ lament, “Little Do They Know.” Two songs, which were cut out of The Act in out of town tryouts, “The Turning,” sung wistfully by Mamie Parris, and “Please Sir” sung by veteran trouper Randy Graff, were reinstated. Graff’s rendition of the very dark, “Please Sir” was appropriately chilling, a dagger in the heart. Who could fail to feel her pain or understand her story?

Anna Chlumsky with “Bobo’s”, Julia Murney with “The Money Tree,” Rachelle Rak with “There When I Need Him,” and Stacie Bono with “Hot Enough For You,” rounded out The Act’s song list, easily demonstrating why each of these singers is a powerful diva in her own right. Karen Mason delivered the encore number of the show, “My Own Space,” with a heartfelt and touching authenticity that left us wanting more. Quite possibly Fred Ebb was peering down from a heavenly musical perch. He would have been well pleased, as was his living, breathing, still working partner, John Kander, who attended the final dress rehearsal and sent a beautiful note of support and pleasure.

Will Nunziata can be very proud of his vision and work on The Act. His decision to explore directing is a good one. He has talent and a natural ability for it. Musical Supervision was by Eugene Gwozdz, and Music Direction by Daniela Candillari (piano), with Adam Neely on bass and Jeff Roberts on drums. Choreography was by Jessica Redish.