Renee Katz: The Shining Triumph of Talent and Optimism Over Cynicism and Evil 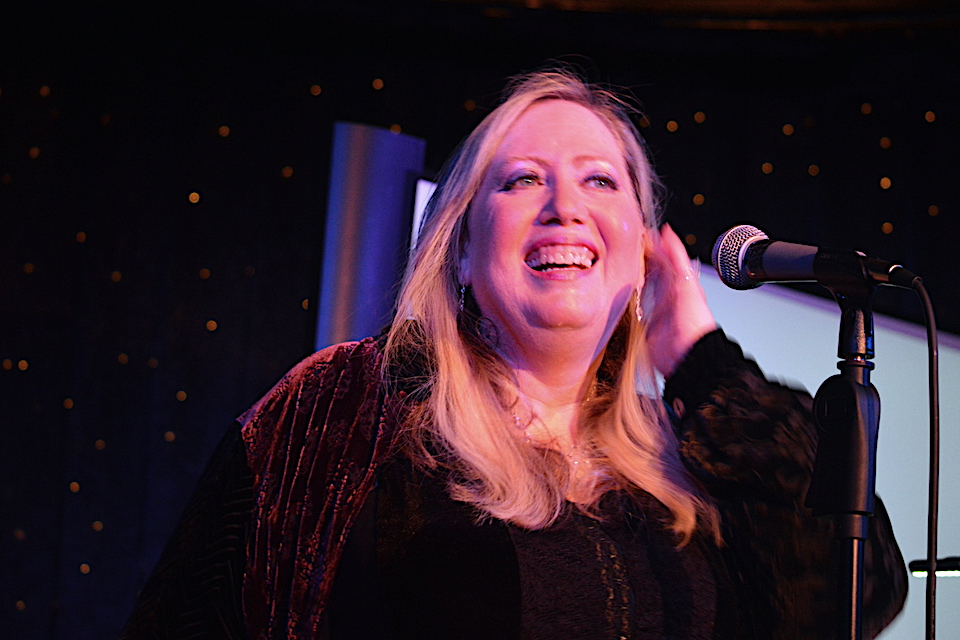 Renee Katz steps on stage at Don’t Tell Mama with a beaming smile on her face and a soul brimming with joy and confidence. “Never Been Gone” is her first one-woman first show in almost two decades. She considers herself lucky despite events that indicate the opposite. She was the 17-year-old gifted LaGuardia High School graduating flutist pianist and singer, who was shoved into the path of an oncoming subway train. Turning quickly allowed her to elude being killed, but her right hand was severed. Luckily Police rushed her, and her hand packed in ice, to Bellevue where microsurgeons Drs. Daniel Baker, the late William Shaw and their team successfully reattached it, but she never regained the motor control necessary to play the flute which ended her hopes for becoming a classical instrumentalist.

Renee’s youth and innocence made her an instant celebrity — international headlines, tabloid photo coverage and even a rap song written about her, but refusing to be remembered as the woman who lost her hand in a subway crime, she chose the path back to life which included seven more operations and two years of rehab where the super-positive attitudes of her fellow patients, especially the amputees and those with spinal cord injuries, inspired her.

She rearranged her college plans, graduated from NYU where she majored in occupational therapy, minored in vocal performance and made her way back to her dreams by turning her voice into her new instrument. From the mid-l980’s to the late 1990’s she displayed her artistry and her musical taste at cabarets and, according to Don’t Tell Mama’s Sidney Myer who booked her at a club he managed then, “She sang beautifully!” She also married her high school sweetheart and 19 years ago gave birth to her son Ethan and rearranged her focus to devote her attention to him. Now that Ethan’s a Hofstra student she decided to return to her beloved cabaret with the support of Journalist Barry Packer, “her final husband.” Renee began by singing again at open mic nights at Feinstein’s/54Below, where she first heard Tedd Firth, an amazing musician, with whom she felt musically connected. He’s now her friend, accompanist and advisor. He noticed and told her that “talking about her experiences, which she had never done, was a great way to return to cabaret.” And she listened. Her published book of poetry and her current cabaret show at Don’t Tell Mama are both entitled “Never Been Gone.” Her performance is an audiovisual experience in which Michael Kolomatsky juxtaposes images from her past with the music she loves now to recapture the innocence she lost when her “wildflowers and daisy wishes” were mowed down by evil.

Renee Katz’s autobiographical program is punctuated by 13 unusual songs by well-known musician/composers, starting with Carly Simon’s “Never Been Gone,” a lush, half western/ half sea chanty ballad which presents Renee’s description of where she presently is:

followed by an Alan Menken’s mystery tune, “I Want to Ride the Ferris Wheel,” which Renee recorded at a Laurie Beechman concert years ago and which neither she nor I can find hide nor hair of on the internet. It’s a happy melody filled with joyous wishes of longing: “I want to hear laughing people and find one of them is me,” followed the Al Jolson hit, “Keep Smiling at Troubles,” a skill Renee has mastered.

Other composers include Peter Allen, Lane and Harburg, David Friedman, Ahrens and Flaherty, The Gershwins, Charles Strouse, Irving Berlin, Steven Schwartz and ending with Rodger and Hammerstein’s “Sound of Music.”

Two songs that were outside of the American Standard Repertoire really impressed me.

Renee played a melody her mother composed, “Forever with You,” on the piano. “I can play the piano very little but I always manage to play her song.” I also was very moved by “Al Tif Gi,” a Hebrew liturgical melody written by Rabbi Lawrence Avery of Blessed Memory who taught Renee the song himself. Hearing her sing it brought tears to my eyes and convinced me that if she ever gets tires of Cabaret, I’m sure there are many congregations who’d be delighted to hire her as their Cantor.

Renee Katz will be reprising “Never Been Gone,” at Don’t Tell Mama later this summer. and keep an eye out for her and Tedd around the holidays when they present Tony-Winning Maury Yestin’s “December Songs.”

Renee Katz is a bubbly, happy, friendly, loving, loving person. It’s impossible not to want to be sharing whatever venue she’s performing in with her.