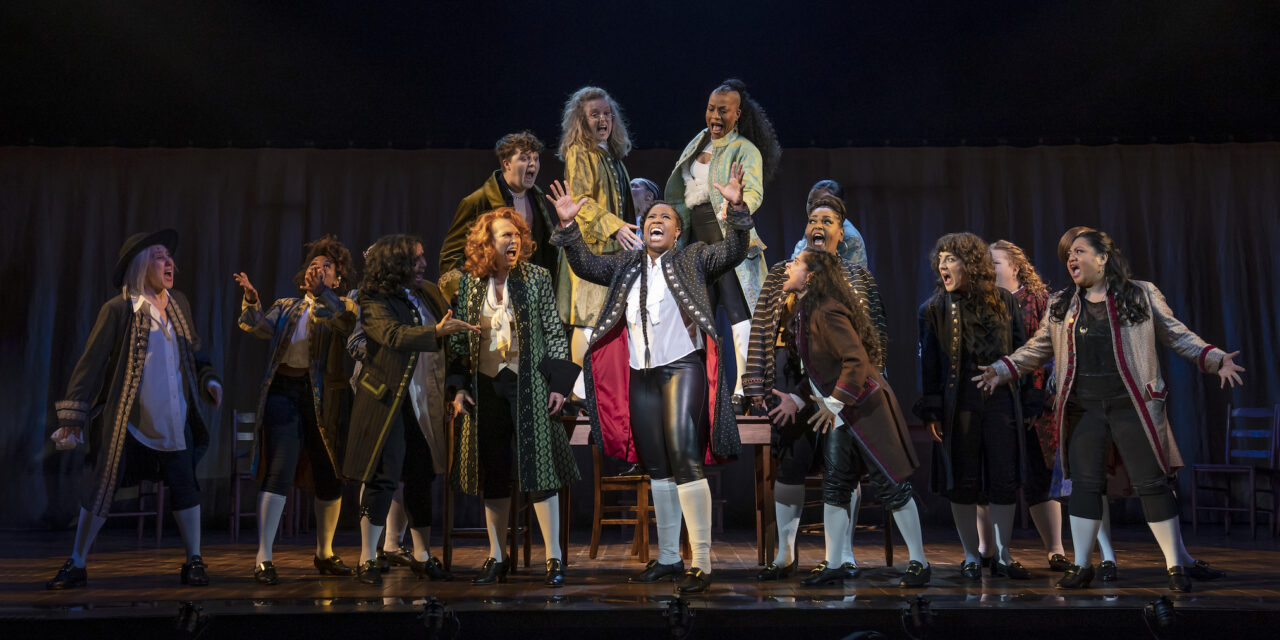 Why are certain shows chosen to revive? Obviously, the first reason is economic viability. After that, beyond the prospect of potentially making a profit, there is the question of the art. The recent revivals of 1776 and Death of a Salesman come immediately to mind, as both shows have proven profitable in the past, and both have the stamp of past artistic achievement. What about this time around?

While box office is always a crapshoot, particularly now as Broadway navigates Covid-World, the two shows in question have starkly missed the mark in their attempts to create more meaningful expressions of art. Are each of their interpretations new? Yes. But even though both shows attempt to be more inclusive of a larger theatrical audience, both shows have narrowed and diminished the more universal meanings originally embodied in these works by their creators. They have, in fact, made them ultimately less inclusive.

Let’s start with 1776. The concept of substituting the array of White male gentry radicals who risked their lives to create the United States into an array of women and non-binary individuals playing the same roles is, at first glance, a provocative and (let’s say it) trendy idea. But does it work in this production? Not so much, and this fault may rest with the show’s directors, Jeffrey L. Page and Diane Paulus. Assuming they were in charge of casting, they were very much hit and miss with their choices. And the critical miss was the casting of Crystal Lucas-Perry as John Adams.

To make any production of 1776 work, the actor playing Adams has to walk a fine line of being both a pain in the ass to the Continental Congress while retaining enough charm to be likable by the audience. Lucas-Perry plays Adams with plenty of passion but without charm. Far more winning is Patrena Murray as Adams’ sidekick, Benjamin Franklin.

Other performers worth noting are Elizabeth A. Davis as Thomas Jefferson (using her violin skills, first exhibited on Broadway when she starred in Once, to excellent effect here), understudy Ariella Serur stepping in at our performance to play Martha Jefferson and singing beautifully, and finally, Carolee Carmello, giving a fiery and compelling performance as John Dickinson.

Speaking of Carmello, one could not help but wonder what she was thinking during the pivotal performance of “Molasses to Rum,” the show’s most powerful number. In this production, what was always a solo performance was turned into a production number, and the result was that it was emotionally flattened and ruined by Jeffrey L. Page’s painfully obvious choreography. In the last revival of 1776, “Molasses to Rum” was given a bravura performance by Carmello’s then husband, Gregg Edelman.

Unlike Hamilton, an original production in which 18th century historical figures are all played by people of color, and the concept feels entirely organic to the production, in this revival of 1776, the change in gender, while obviously intended to make a contemporary statement, just comes off as stunt casting. Worse, when a video montage of 21st century images intended to show the future of the decisions being made in 1776 blossoms on stage, the production veers into pandering. Frankly, its as if the directors do not trust their material; the book and music of this show are so strong that a similar choice for the actors to be outright presentational when the show is warning us about the founder’s ultimate decision to compromise about slavery is to demean the audience, assuming we are stupid and would not otherwise “get it.”

It is only to the credit of the original material that there were times during the show we were moved to tears. Had the current revival done its job, we would have wept more, enjoyed more, and cheered more.

Now to Death of a Salesman…

Exalted from its original production and throughout its many Broadway revivals as a play that has universal appeal, this new production that comes to us from the West End, directed by Miranda Cromwell, has made the disappointing choice to narrow the play’s meaning.

Again, it comes down to casting. Had Cromwell opted for an all-Black cast, not only would more Black actors been employed, the play’s meaning would have remained as Arthur Miller intended, a universal story of the limitations of the American Dream. But by only casting the Loman family as Black and everyone else as White, the play becomes a meditation on the Black/White dynamic in America; it has made a play about an Everyman into a play about a Black man — which is perfectly valid, and by no means a small canvas, but it is not a broader interpretation of the play as some have argued.

That major issue aside, we need to also make note of Sharon D. Clarke’s towering performance as Willy’s wife, Linda. She was magnificent last season as Caroline in the critically acclaimed revival of the musical Caroline or Change, and she is equally magnificent in this revival. We have no doubt she will receive another Tony nomination. The only downside to her powerfully human performance is that the play now tilts toward becoming more about her and the journey she makes in the play, rather than about Willy (Wendell Pierce) and his tragedy. Be that as it may, the show is worth seeing if, for nothing else, Sharon D. Clarke’s performance.