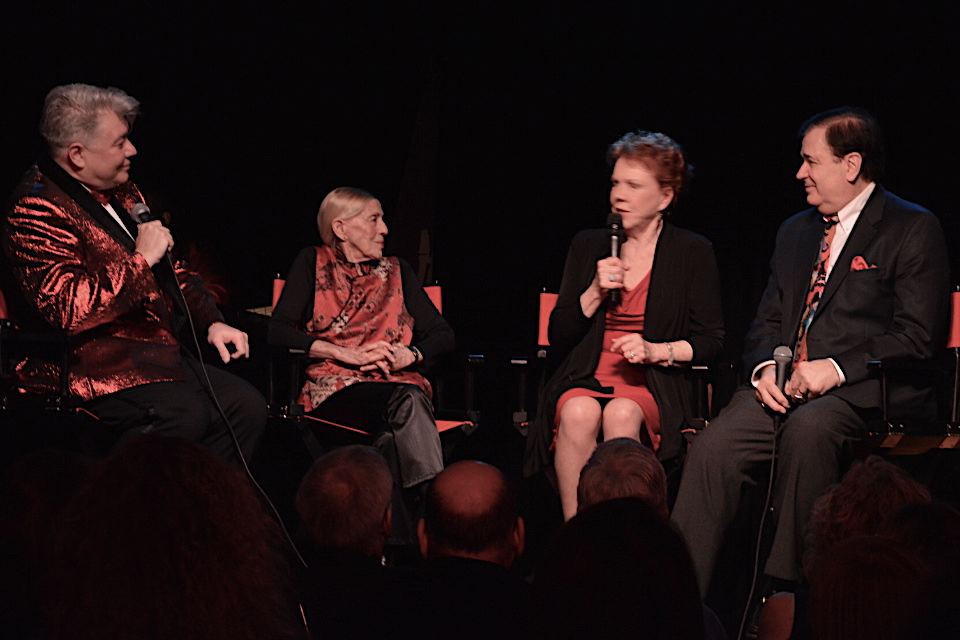 Richard Skipper likes to celebrate. He likes to celebrate so much he does it once a month with a cheerful “Celebrates” series of shows at the Triad theater, dedicated to positive energy and happy-making entertainment. Inaugurating the new year, Skipper kicked off 2017 with a spectacular, sold-out show celebrating the 53rd anniversary of the opening of Hello Dolly on January 16, 1964. With a memo to all to wear “David Merrick red,” Skipper assembled a stellar cast to reminisce and salute one of the most successful musicals in Broadway history. Film clips in two sections of the evening highlighted the many actors who portrayed Dolly Levi over the decades, from the original, Carol Channing, to the next Dolly, Bette Midler, who’ll open the 2017 revival in April. In between these two luminaries, the various Dollys proved to be a litany of show biz royalty. Among them are Pearl Bailey, Dorothy Lamour, Eve Arden, Ann Southern, Michele Lee, Edie Adams, Yvonne De Carlo, Lanie Kazan, Betsey Palmer, Molly Picon, Martha Raye (who brought the show to the troops during the Vietnam War) and Marilyn Maye. As guest Lee Roy Reams pointed out, all of these actors brought their own personalities to the role, creating a different show with every outing. First to take the stage was Sondra Lee, the original’s Minnie Fay, who revealed many backstage stories about the production when it was in previews and during the opening at the St. James Theater (many recounted in her recent memoir, I’ve Slept with Everybody). Guided by Skipper – a facile interviewer and master at off-the-cusp quips – Lee shared her experiences with enthusiasm. She was joined by Lee Roy Reams, director of several Dolly revivals, and the only man to play Dolly herself (at the Wick Theatre in Boca Raton, Florida) in a sanctioned role in a regional theater in the United States. Famed impersonator Danny Larue had a long run as dolly in London. Reams also sang delightfully, with his usual flair, three songs from the score (music and lyrics by Jerry Herman): the dropped “Penny in My Pocket,” “Put On Your Sunday Clothes” and, summoning Beth Fowler to the stage, a duet of “It Only Takes a Moment.” Fowler, who played Irene Molloy in the 1971 summer stock Hello Dolly with Molly Picon, sang “Ribbons Down My Back” with voice sure and strong. One of the back story gems of Hello Dolly (aside from the fact that its producer, David Merrick, loathed the title song) is that it was originally written for Ethel Merman, who turned the role down (Merman later agreed to appear in a revival). Ethel Merman tribute singer, Rita McKenzie, who sounds uncannily like the diva, was on hand to sing a tune composed expressly for Merman: “World, Take Me Back.” Closing out the celebration was Marilyn Maye, who is as much an actor as she is an extraordinary singer, the common thread of the two skills being a keen ability for story telling. Maye beautifully delivered Dolly’s famous speech (by book writer Michael Stewart) “Ephraim, let me go” followed by stunning vocals on “Before the Parade Passes By” and So Long, Dearie.” This superlative evening ended with a sing-along, conducted by the affable Skipper, of “Happy Birthday” to Carol Channing (who will be 96 on January 31) and of course, the eponymous “Hello Dolly.” The songfest was recorded on smart phone for delivery to the original Dolly herself. Last but not least, backing up the joyful proceedings were music director/pianist Tedd Firth, bass guitarist Jeff Carney and Rex Benincasa on percussion. The next installment of Richard Skipper Celebrates will be on February 12 at 1 PM for a brunch show at the Laurie Beechman theater. Visit RichardSkipper.com for more information.