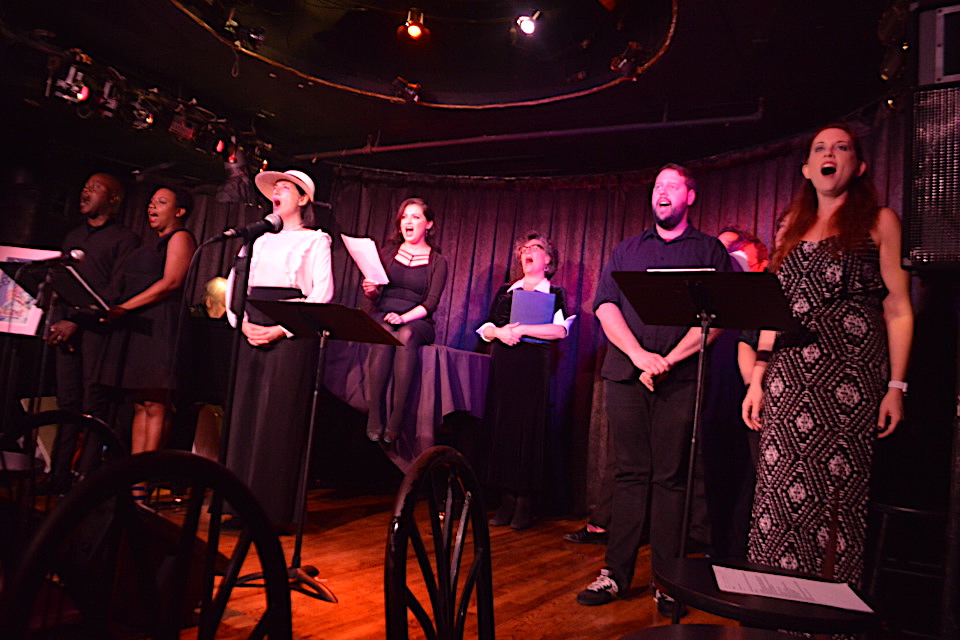 I have attended almost every single one of the now going on three years’ worth of Ricky Ritzel’s Broadway’s and always depart in varying states of exhilaration and with the same question floating through my brain. Can Ricky ever again equal or (gasp!) surpass the shenanigans of the particular mini-extravaganza that enraptured the audience on that particular evening.

Well, I’m pleased to report he not only can, but does.

Ricky Ritzel is a force majeure whose in-depth knowledge and appreciation of musical theater is this basis for his monthly choice of three Broadway shows — one hit, one meh and one fiasco. He reveals tidbits/gossip/data/reviews about each, composes and plays the charts he’s written for the member of his The More Than Ready for Prime-Time Players he feels will endow a particular song with the wit, style or emotional knockout punch it deserves. Ricky applies that same attention to less familiar material and often makes me wonder why a production with such memorable melodies or exceptional lyrics closed more or less overnight. One might also wonder where Ricky discovers such great white way worthy performers.  Look no further than Don’t Tell Mama’s piano bar, booked by Sidney Myer, where Anna Anderson, Brian Kalinowski, Tara Moran, Alison Nussbaum, Laura Pavles and Paul Pilcs toil awaiting their deserved big break. Other Ricky regulars? Jay Rogers has been an award-winning theatrical and cabaret imp for decades; Meg Flather is a home shopping television personality and an award-winning cabaret performer; Aaron Morishita is the other half that completes Ricky’s retro-satirist Lounge-o-Leers. The prize-winning theater performer Kristine Zbornik who belts out songs like Ethel Merman would have if she’d had a sense of humor also once worked in Mama’s music bar. As for Aaron Lee Battle, who has Off-Broadway credits and toured the Middle East in Ain’t Misbehavin’ – he and Ricky lived across the river from each other in New Jersey, worked at the same amusement park as teens but only met after they moved to New York.  To quote the very quotable Sidney Myer, “Cabaret brought us all together.” Ricky’s August 2017 show opened with the epic Stephen Flaherty-Lynn Ahrens’ melodic masterpiece, Ragtime, based on E. L. Doctorow’s novel, the author whom a former president who actually reads books, called “one of America’s greatest novelists.” Ragtime tracks three families in pursuit of the American dream in the volatile “melting” pot during the turn of the 20th century, contrasting wealth and poverty, freedom and prejudice, hope and despair of a wealthy white couple, a Jewish immigrant father and motherless daughter and an African American ragtime musician and his wife and son.

Initially the entire company filled the stage, their glorious voices blending in brilliant harmony to the unforgettable “Ragtime” prelude to the show. When Aaron Lee Battle, as the piano playing Coalhouse Walker Jr., sang the moving lyrics of “Wheels of a Dream” about his hopes for his son (with Anna Anderson) and “Make Them Hear You,” Walker’s son’s reaction to the murder of his father, I do not believe there was a dry eye in the room. Meg Flather, as the upper class white mother who finds her feminism and humanism, was also remarkable in a song that defined how she’d changed and could never go “Back to Before.” The Magic Show, an early Stephen Schwartz box office hit was not a critical success. It’s set in a seedy nightclub where the owner hires an unconventional magician, so set on fame and fortune that he never notices his assistant is in love with him. Instead he conjures up what he thinks he needs, a beautiful assistant, who laments her state. As you can imagine, hysteria ensues but everything works out in the end. Sidney Myer singing “Style,” a substance he has in abundance, was, as always, noteworthy. Jay Rogers pulling a rabbit out of a hat with neither rabbit nor hat, only his charming smile and facile body, was enchanting. Curtains, a Broadway musical murder mystery and John Kander and Fred Ebb’s swan song, was properly named inasmuch as the final curtains in life for lyricist Ebb and playwright Peter Stone fell before the play’s opening curtain rose on an audience. “I Miss the Music,” with lyrics by Kander is Kander’s homage to his deceased writing partner and was sung incredibly plaintively by Ricky. I saw Curtains when it opened on Broadway starring the then “hot” Deborah Monk. Ricky’s Kristin Zbornik’s delivery was fifty times better, and turned “It’s a Business,” into an 11 o’clock number.

Next month, at Don’t Tell Mama, 7 pm but on the last Thursday of the Month, September 28th watch Ricky and Company’s take on Promises Promises, Sweet Charity & Lil Abner. Videos of Ricky Ritzel’s previous Broadways are posted on YouTube.com. They’ll give you a taste of what goes on but the show is much better when you’re in the audience with a drink in your hand.