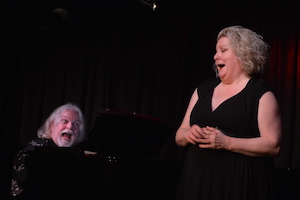 Here’s why the last Friday of every month is circled in RED on my calendar as well as on the datebooks of every savvy New York Cabaret aficionado. That’s when Commodore Ricky Ritzel and his More Than Ready for Prime Time Players rise from the mists of Shmigadoon to disentomb and rehume three Golden Oldie Broadway Musicals. To be perfectly honest, only one is guaranteed to be glorious. The others were not top drawer to begin with and have aged accordingly, but thanks to Ricky’s hysterical, historical banter and over-the-top performances by Ricky’s company, even the most abysmal washouts reveal prize-winning moments.

August’s Ricky Ritzel’s Broadway began with one great, glorious and still-bringing-in-mucho-dinero royalties, the Tony winner, Bye, Bye, Birdie. Its original title was “Let’s Go Steady,” but both plot and writers were sent packing when the newby producer’s third choice choreographer, Gower Champion, “wanted something more.” He got it from Michael Stewart, a staff writer for Caesar’s hour, Composer Charles  Strouse, a rehearsal pianist and Strouse’s Lyricist/Libretto-ist Lee Adams. Their inspiration? The drafting of Elvis Presley.

Their vision included the media circus around a teenager from Sweet Apple, Ohio, chosen to receive the star’s last kiss before he’s stationed in Germany by Uncle Sam.  Would you believe they named their make-believe rock-n-roller Conway Twitty, because they were unaware that a Rockstar with that name actually existed … until he threatened to sue. The hero’s name was changed to Conrad Birdie which fit better into the title.

Critical reception?  Mixed!  What do they know? The NY Times admitted the audience was “beside itself with pleasure” but Brooks Atkinson contained himself and declared it needed work! In the Daily News, a scandal sheet for the baseborn, John Chapman marveled at the “funniest, most captivating and most expert musical comedy one could hope to see,” but noticed that no bold-faced names were involved in its creation. “Who ever heard of Padula, Strouse, Adams or Gower Champion.” Well, millions have since opening night.

At Don’t Tell Mama, with Ricky Ritzel’s fingers tickling the facts and the ivories, the exceedingly beautiful and talented Tara Martinez put oodles of oomph into “How Lovely to be a Woman.” I daresay it would have been lovely for every female in the joint who looked and sang like her.  Off-Broadway Hunk, John Satrom, gleefully “Put on a Happy face,” which led to the distressed appearance by Sidney Myer as a distraught Rosie, a quasi-fiancé, sprouting, “What did I Ever See in Him” with this down and dirty Q&A about the battle of the sexes,

before Tara returned with “A Lot of Living to Do.” Birdie said bye, bye with Sidney Myer, as both equally disgruntled parents of the recipient of Birdie’s good-bye smooch, asking another eternal question about “Kids.”

Why can’t they be like we were, perfect in every way?

The backstory of musical #2, Do I hear a Waltz? is the tale of mitzvah (good deed) gone astray. It was based on a play by Arthur Laurents, about a teacher who goes to Venice, falls into a canal and in love with her handsome Italian savior. Married? Si. Si. You betcha!

Laurents had a modest chamber musical in mind with a score by Rodgers and Hammerstein, starring Mary Martin. By the time they began work on it, Martin was too old to play the teacher, Hammerstein was dead and Rodgers was hiding fifths of Vodka in his toilet tank. Rogers never felt the play was right for a musical. Sondheim agreed, but felt he owed Hammerstein who’d been his mentor, for appointing Sondheim his successor as Rodgers’ lyricist and also owed Laurents for recommending him, a novice, to Leonard Bernstein as the lyricist for West Side Story.

At the first meeting of Rodgers, Sondheim and Laurents with their first-choice director, Franco Zefferelli, Rodgers fell asleep mid-discussion. Rodgers drinking became a major problem.  He became totally disrespectful, openly dismissing Sondheim’s lyrics as shit and banning Laurents from rehearsals.  Herbert Ross was called in. He worked on dance routines and his wife Prima Ballerina Nora Kaye, ended up mediating the warring factions.

A Ricky Ritzel newcomer, Eadie Scott played the soggy teacher, with less verve than I would have preferred. Aaron Morishita and Ricky joyfully complained about their hatred of flying, but admitted flying everywhere anyway. Sean Patrick Murtagh sang a run-of-the-mill love song, “Take the Moment,” in a way that made every heart flutter in double time.

During tryouts, Sondheim gave Rodgers the lyrics to “We’re Gonna Be All Right,” and Rodgers liked them. He took them home to his wife who said they were too dirty. Sondheim was forced to clean them up, omitting some of the cleverest lines that defined problems in certain marriages…

An attitude that belonged in Sondheim’s Company. Fortunately, the original bluer lyrics were restored for Side by Side by Sondheim but at this performance Ricky and Tanya Moberly at her most cynical and wicked best, rocked the room with both the original and cleaned up versions.

What can you say about I Had a Ball! The less said the better.  It starred Buddy Hackett! It starred Buddy Hackett! It starred Buddy Hackett. Like earlier clown shows designed to showcase the talents of a comic, it was short on plot and loaded with shtick. Two oddities struck me. Lloyd Richards, who later became Artistic Director for the Yale Rep Theater and a frequent collaborator of playwright August Wilson, was signed to direct . . . but not for long. Even after being fired,  he kept his credit in the program. Richard Kiley played Sam the Shpieler which obviously prepared him to sing “The Impossible Dream” as the Man of La Mancha, his subsequent role which earned him his second Tony.

Our Tanya Moberly, gave her all to “I Got Everything I Want.” Warren Schien gave his double all and was particularly adorable trying cloning Buddy Hackett in “Freud.” I couldn’t make out most of the words to “Fickle Finger of Fate,” but I suspect that was no great loss. Ricky, Tanya and the Company closed the program with “I had a Ball”. And a ball was had by all.