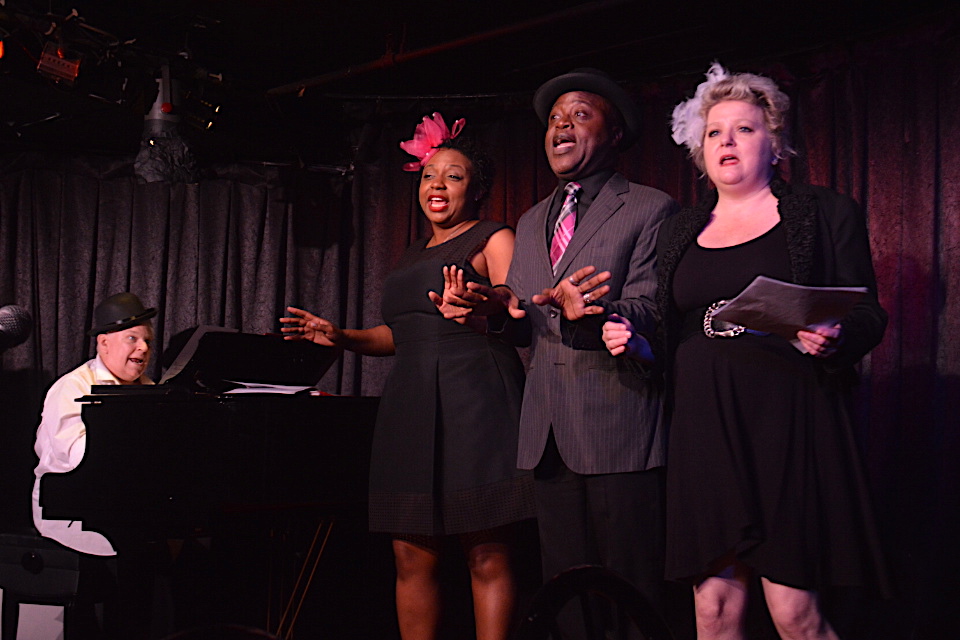 While the keeper of the flame for Ricky Ritzel’s Broadway, Myra Chanin, is traveling in Hawaii, I couldn’t let this auspicious evening of song pass me by without being part of the BIG anniversary celebration at Don’t Tell Mama that earned Ritzel and his luminaries multi MAC awards in the three years running.

Celebrating three multi cultural shows, the chosen animated cast, directed by Jay Rogers, covered the politically correct or is that incorrect (?) gamut because, as Ricky notes, “I’m an equal opportunity offender.” Beginning with The Wiz, music and lyrics by Charlie Smalls, choreographed by George Faison, it eventually made its way to the Great White Way utilizing TV advertising, the Broadway run costing $67K a week to produce, and went from practically no audience to an SRO smash, logging in 1672 performances when it finally closed in 1979 after a four year run. With Ricky at the piano, Tara Martinez took the stage as Dorothy, singing “Be A Lion” to Aaron Lee Battle, as he all to quickly morphed from lion to Wizard in a flash (well, almost a flash) appearing in a long red robe, “So You Wanted to See the Wizard.” – and a scary commanding wizard was he! Soon they were joined by the Wicked Witch of the West, the formidable Tanya Moberly, who wanted “No Bad News.” Talk about non-traditional casting, Aaron Morishita played Glinda singing “Believe in Yourself” and the powerful Anna Anderson just clicked her heels to take us “Home.”

And they were on to Rodgers and Hammerstein’s Flower Drum Song that opened on Broadway in 1958 at the St. James Theatre, logging in 600 performances. Hammerstein had to drag Rodgers out of a psychiatric facility (where he was recovering, attempting to curb his drinking problem) to get him to write. The overly assimilated Aaron Morishita sang “You Are Beautiful, ” and, as Sammy, “Don’t Marry Me;” Natasha Castillo countered with “I Enjoy Being a Girl (as Linda) and everyone’s favorite Sidney Myer put his own spin on “Grant Avenue” with a ding dong that will never be the same! Tara Martinez, her lovely soprano ringing true and clear, gave meaning to “Love Look Away.” It’s a complicated mix of who loves who and winds up with whom. The 100th show was an homage to “Ain’t Misbehavin’ “ (Murray Horwitz, Richard Maltby Jr.) that opened at Manhattan Theatre Club’s east side cabaret in 1978 with Andre De Shields, Nell Carter, Irene Cara and Ken Page transferring to the Longacre Theatre, the Plymouth Theatre and finally to the Belasco, playing 1604 performances + 14 previews with Richard Maltby as director. It got 5 Tony nominations and won 3.

As Ricky donned his bowler, he opened with “Your Feet’s Too Big;” Anna Anderson arrived with a big pink headpiece singing “”Keepin’ Out of Mischief Now,” joined by Tanya Moberly for a hilarious, down and dirty “Find Out What They Like.” Aaron Lee Battle was right there, looking sharp in a bowler, jacket and tie, offering an introspective “Black and Blue.” The hi octane music from that show also included “I’m Gonna Sit Right Down and Write Myself a Letter” (Ricky), “I Can’t Give You Anything But Love” (Aaron), “It’s a Sin to Tell a Lie” (Anna), and the ensemble’s big ending – “Ain’t Misbehavin’.” Note: Anna Anderson was just cast in a production of “Ain’t Misbehavin’.”

Well, I’m sorry that Myra, or anyone else for that matter, missed this one but you can catch the continuing saga, with a replay of June’s show again on Friday, August 31. Well worth the price of admission, Ricky Ritzel’s Broadway has just the right ingredients: humor, pathos with a peppering of edgy.