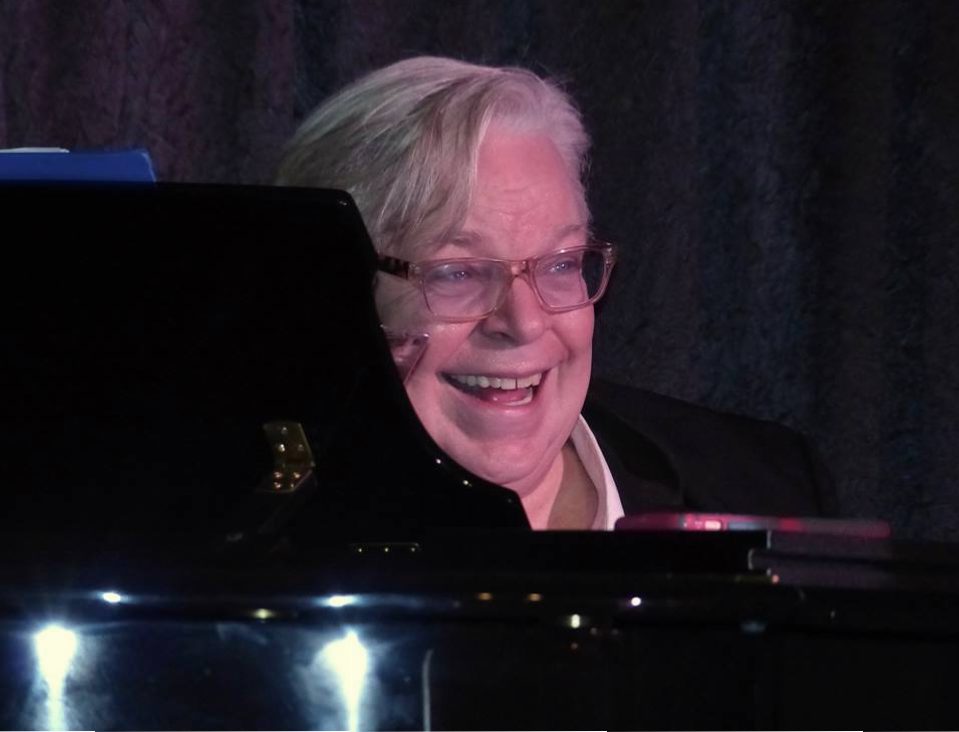 January’s Ricky Ritzel’s Broadway XV at Don’t Tell Mama was the best one ever. If you’ve flunked Mathematical Latin, I’m talking about the 15th in the series of monthly rollicking; regular-packed non-extravaganzas performed on the last Thursday or Friday of every month. Since August 2015 Rickey’s troupe of cabaret vagabonds, The Have Been Ready Already For Prime Time For Several Decades Players, have deconstructed words, music and gossip about two Broadway hits and one Flopperoo. This month’s? Funny Girl, High Spirits and You’re A Good Man, Charlie Brown.

The effects of Ritzel’s efforts on himself have been unnerving. The cute blond youth, the Maestro in 2007, has been transformed into S. Z. “Cuddles” Sakall! Egad!

Funny Girl took the most circuitous route to Broadway through Hollywood producer Ray Stark, newly-wedded to Fanny Brice’s daughter Frances. He commissioned a biography based on his mother-in-law’s recollections which sold well until Fran Stark decided she didn’t like it and had him pay Knopf 50K to take it off the market. Ray considered turning it into a biopic but Ben Hecht and 10 nameless hacks said it was a no-go. Eventually Isabel Lennart’s script convinced Columbia Pictures to pay Stark 400K and a percentage of the gross for it.

Mary Martin, Anne Bancroft, Edie Gorme, Carol Burnett turned down the lead. Stephen Sondheim, Jerome Robbins, David Merrick, Dorothy Fields and Bob Fosse thought it had possibilities but not for them. Everyone agreed Fanny should be played by a Jewess.

In 1964 it finally opened on Broadway with a score by Jule Styne and Bob Merrill, a much shorter version of Isobel Lennart’s book. It starred the ultimate Jewess, Barbra Streisand who was being directed and at war with Garson Kanin because he wanted to cut “People,” after she’d recorded it as a single. Funny Girl, ran for three years, received 8 Tony Nominations but took home none. Why? Two words. Hello Dolly. Three years later, Fanny went to London where nobody rained on her parade. Ricky’s Fanny, Lauren Turner, is a Texan with a musical theater degree from Belmont University, who toured the US in Grease. She’s been living in New York for a year, is on staff at Don’t Tell Mama’s piano bar and is a featured performer in their Sunday Morning Broadway Boozy Brunches. Lauren raised the rafters singing “People,” “Don’t Rain on My Parade,” and the glorious “Music That Makes Me Dance,“ a sensuous melody with gorgeous interior rhymes equal to any by Gershwin, Hart or Sondheim. The duets presented a problem — finding a guy in the cabaret community butch enough to portray Nicky Arnstein, the thug Fanny loved. Sidney Myer passed the height requirement – Arnstein was 6’ 6” –- but sang “I Want To Be Seen With You on My Arm,” as if he’d discovered his fashion designer potential during his prison term and wanted to turn Fanny into a logo. Aaron Morishita, the other Nicky, was more assertive but closer in height to Fanny’s third husband, Billy Rose’s 4’ 11”, and also seemed more comfortable singing “Pink Velvet Jail” than “You Are Woman.” High Spirits, based on Noel Coward’s play Blithe Spirit, and directed by him, with book and score by Hugh Martin and Timothy Grey, was about Charles, a writer, who hosted a séance to learn a fake medium’s tricks for use in his future novel, but Madame Arcati, the real thing, actually conjured up his invisible-to-everyone-but-him late wife Elvira, who moved into his house, hoping to kill Charles and take him back with her to her “Home Sweet Heaven.” Instead, Charles’ current wife kicks the bucket and the two wively spirits turn Charles’ life into a nagging, bickering hell. High Spirits also opened on Broadway in 1964, was nominated for 8 Tony Awards and thanks again to Hello Dolly won nary a single one. Starring Tammy Grimes and Beatrice Lillie, it lasted on Broadway for about a year. Everything Kristine Zbornik did as Elvira was hilarious. She’s been called the funniest woman on the face of the earth and she certainly was. Her tacky white lace shroud and disheveled platinum wig were a sight for sore eyes and she was a total hoot as Elvira. Her wild body movements had the crowd howling so loud through “You Better Love Me,” that no one could hear the lyrics, a blessing because they actually are quite banal. She stopped the show again explaining why she’s homesick for her “Home Sweet Heaven,” in witty couplets that sounded like they’d been composed by Noel Coward and Cole Porter during a bender and naturally tweaked by Ricky Ritzel et al. Ricky saved the biggest surprise for last. Because pre-teen actors had been cast in the York Theater revival of You’re A Good Man, Charlie Brown, Ricky went one better and cast the “original” cast of the 1967 Off-Broadway production in his – many of them looked like they’ve long been receiving Medicare. It’s actually a song cycle written by Clark Gesner who was unable to get permission to use the characters from the United Features syndicate, but went above them to Charles Schultz for an OK. Barbara Malley portrayed the more lovelorn than mean Lucy, doting after Ricky Ritzel’s Beethoven-obsessed Schroeder, hoping to convince him to play a livelier tune. Sally Darling was a gentle Sally. Jay Rogers portrayed Snoopy with a black ribbon tied around his neck. The real gem was Bob Diamond as an older but hardly wiser geezer Charlie Brown in the same banded tee-shirt with the same confused look in his eyes. “My New Philosophy” which consisted of “No!” and “Tell me about it!” was a hilarious song, provided a perfect ending to a pretty much perfect show.