Ricky Ritzel’s Broadway is Back! 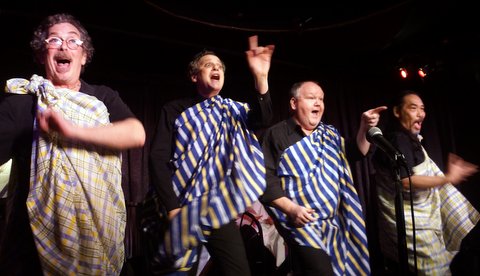 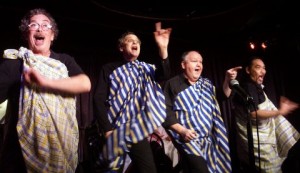 According to his wiseass bio, Ricky Ritzel was last seen on Broadway hailing a cab. Actually Ricky is a formidable Cabaret stalwart who spends most of his time at off and off-off Broadway venues arranging, creating, directing, performing and playing for extremely talented individuals who would be Broadway superstars if life were fair. Ricky’s extravaganzas usually have legs. His latest series, Ricky Ritzel’s Broadway, certainly does. RRB is a live monthly show featuring Ricky’s take on Broadway hits, flops and anything in between, with plots retold by Ricky, and musical highlights performed by casts of should-be-far-better-known performers. Right now, Ricky’s regulars — Rising Star Christina Aranda, Mama’s favorite son Sidney Myer and comparative newlyweds with incomparable talent Aaron Morishita and Jay Rogers — seem to be merging into a stock company which is also a diverse meritocracy. Even a bushy moustache, greying nappy hair and an askew, totally Goyishe blonde wig didn’t stop Jay Rogers from being given the opportunity to convince me he was a gorgeous virginal ingénue.

RRB #2’s featured musicals were (1) Sondheim’s Funny Thing Happened on the Way to the Forum, (2) Sondheim’s Follies and (3) Frank Loesser’s Guys and Dolls – two guaranteed hits sandwiching a filling which despite having lost its entire original investment has convinced subsequent producers, usually unsuccessfully, to try and fail again. Ricky’s reasons for this particular selection? Forum was male-based, Follies was female-based and Guys and Dolls had something for folks of every sexual persuasion. 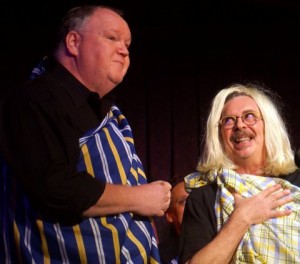 The score of Funny Thing was Sondheim’s first attempt to write both music and lyrics for a Broadway musical. Award Winning TV writers Bert Shevelove and Larry Gelbart based their book on the farces of ancient Roman playwright Plautus — a bawdy story about the attempts of the slave Pseudolus, to win his freedom by helping his master win the courtesan next door, on layaway for a war hero. The show was in the loo, until Jerome Robbins was proposed as the show’s savior. One problem. Robbins had named a friend of the star, Zero Mostel, to the House Un-American Activities Committee. Mostel agreed to work with Robbins because “We of the left do not blacklist!” but greeted Robbins with “Hiya, Loose Lips!” when Robbins arrived at rehearsals. Loose Lips had Sondheim write a new rousing opening number, “Comedy Tonight,” that set the tone for the evening with lyrics like these,

. . . which prepared the audience for an evening of laughter and sent Funny Thing and Zero Mostel both on the way to TonyAwardsville.

RRB#2 also opened with “Comedy Tonight,” sung by Mama’s male trio, ably augmented by Lennie Watts – “a one man cabaret army!” I couldn’t help wondering in which Jack’s Dollar Store they found their literally matchless cot-sized togas. “I’m Lovely,” received both straight and comic renditions, followed by lesser tunes handled admirably by Eadie Scott and Alison Nusbaum, before the male chorus concluded this segment with an inspiring rendition of “Everybody Ought to Have a Maid!” 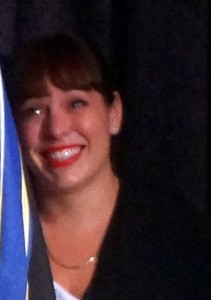 Minus the magical distractions of crumbling Broadway theater sets, glitzy feathers, ghostly lighting and the anxiety of wondering how long it would take one of those Weismann babes to topple down the steps on her stilettos, Follies felt flat to me. Alison Nusbaum’s “Could I Leave You?” was contemporary, but the ballads “Losing My Mind” and “In Buddy’s Eyes,” despite being beautifully sung by Edie Scott and Christina Aranda, struck me as inadequate. The songs work better in the full musical but seemed sappy out of context. Laura Pavles singing “Broadway Baby” struck the peppiest note in Follies. Pavles is a Boston Conservatory MFA whose night job is bartending in Mama’s piano bar.

Moving on to the always wonderful Guys and Dolls, with words and music by Frank Loesser, the plot is based on the stories of Damon Runyon, the Geoffrey Chaucer of Prohibition Manhattan. Characters run the gamut from gamblers looking for a place to hold a permanent floating crap game to Salvation Army members hoping to save their souls. Loesser is a master of melody and created both romantic and comic lyrics which seem as pertinent today as the day they were written, particularly when sung by Eadie Scott and Christina Aranda who gave away their milk and are still waiting in vain for the recipient to buy the cow:

At Wanamaker’s and Saks and Klein’s, A lesson I’ve been taught

At any vegetable market from Borneo to Nome

All the regulars were great, but the two standouts were Lennie Watts and Laura Pavles. Lennie was born to sing “Fugue for Tinhorns,” and “Sit Down You’re Rockin’ the Boat,” and Laura’s rendition of “If I Were A Bell,” got her a standing ovation.

If you missed RRB#2, don’t be sorry, be smart. On September 4th, RRB#3 will be back at the same place (Don’t Tell Mama), same time (7 PM), with similar cast members featuring Hairspray, The Happy Time, the fabulous Mack and Mabel and Miss Saigon. I can hardly wait to hear Ricky Ritzel’s dish on dose. www.donttellmamanyc.com