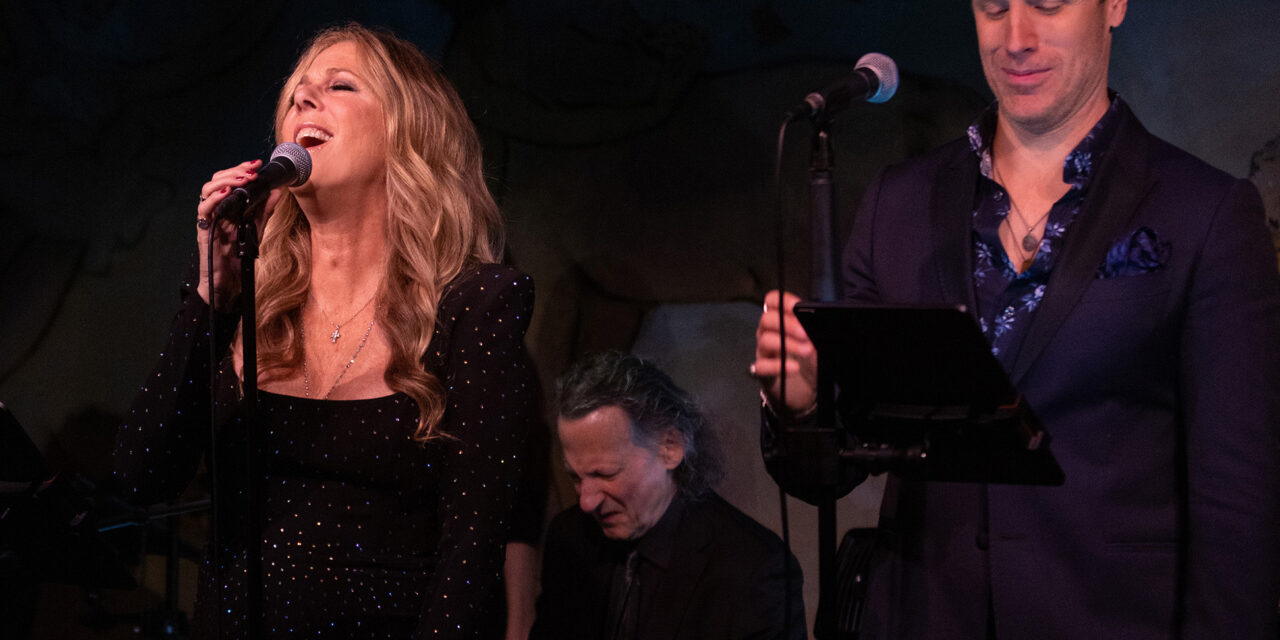 Singer-songwriter Rita Wilson is a welcome Café Carlyle regular, but heretofore she’s been a single act. With this residency, Wilson has invited several guests in a show entitled Rita Wilson Now and Forever: Duets. The show is actually a celebration of her latest CD, bearing the same title. For the first week of performances, her duet partner is Canadian Fraser Walters who ,until recently, has been touring with the very popular Canadian group, The Tenors. (For her second week, November 1 – 5, entitled Rita Wilson’s Liner Notes,” the singer will be joined by songwriters, including Desmond Child, Kara Dioguardi and Darrell Brown.)

Wilson is a bubbly, youthful bundle of energy and this seventh album—her “personal American Songbook”—is, she reported, a selection of 10 classic songs from the 1970s, all arranged as duets. Her usual musical backup in quartet form, was enhanced in this show with a violin and second bass, which added a great deal of depth and richness to the set, especially perfect for duet arrangements. From the opener, “Let It Be Me,” Wilson and Walters were already in a groove of beautiful harmonies and a smooth blend of voices. Their chemistry together was unmistakable, assuring an upbeat, gratifying evening ahead. Narrative was condensed, mostly setting up the music, with a welcome smidgeon of banter thrown in. For instance, Wilson explained that “Let It Be Me” was originally a French tune called “Je t’appartiens” by Gilbert Bécaud. It was picked up by the Everly Brothers and translated into English. Likewise, “Without You,” made into a hit by Harry Nilsson,” was actually written by Brits Pete Ham and Tom Evans, with their authorship of it largely ignored or forgotten.

By the second tune, “Where Is the Love?” (Ralph MacDonald, William Salter) it was one hundred percent apparent that the sextet was superbly orchestrated to make the most of each of the instruments. Most of the numbers were arranged at mid-tempo, but suited Wilson’s vocal tone—it’s smooth and mellow but not as powerful as those who are wont to belt. That’s fine—she’s got excellent dynamics and tells the story. Wilson also included in the set some of her work from a previous album and last Café Carlyle appearance, including “Throw Me a Party” (written with Kristin Bush and Liz Rose). As a cancer survivor, Wilson’s upbeat number is about how she decided she wants to be remembered when she’s gone. Another Wilson solo, and part of her repertoire was “New Girl,” (written with Emily Shackelton), a pointed commentary on infidelity in marriage.

Walters possesses a robust and powerful tenor, absolutely glorious to listen to. It’s no wonder he attained fame with The Tenors. During the duets performed with Wilson, Walters proved charming and supportive of the headliner, adding bits of information that supplemented Wilson’s narrative. For a rousing rendition of “Massachusetts” (Barry, Robin and Maurice Gibb), after noting the Bee Gees had never even been to that state, Walters delivered a witty quip: “This one’s not for New York Yankee fans.” Baseball devotees would immediately know that Massachusetts is the state in which American League uber-rivals, the Boston Red Sox play. It was during his solo turn of “Bring Him Home” (Claude-Michel Schönberg, Alain Boublil and Jean-Marc Natel; English version by Herbert Kretzmer) that Walters revealed a stunning depth of singing and storytelling, with passion and acting chops to back it all up.