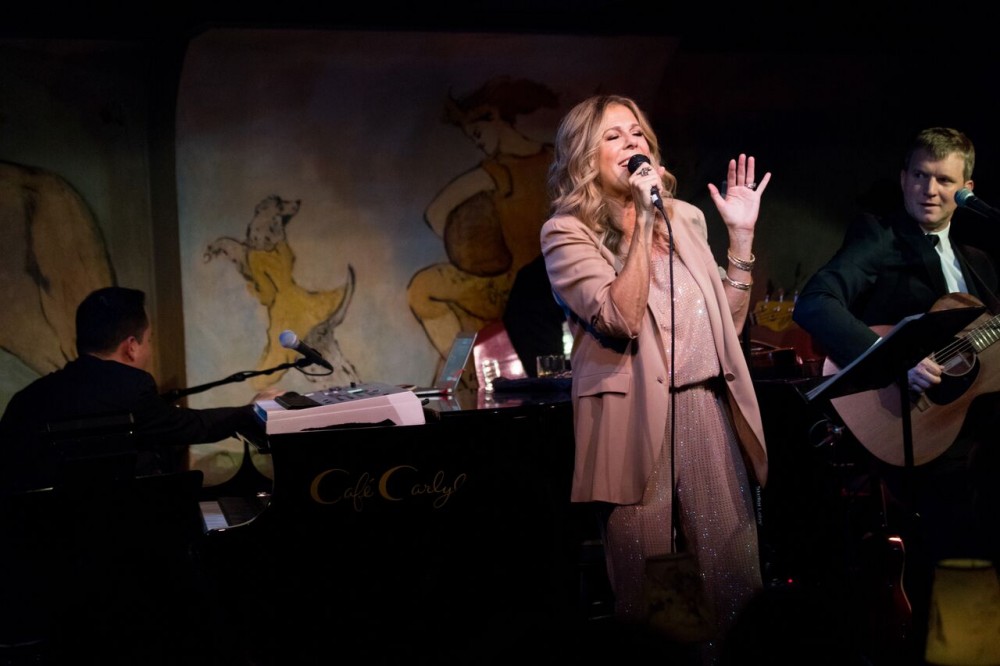 The tall, good looking perky blonde is, once again, in residency at the Café Carlyle and is an appealing sight. Although, audiences are mainly used to hearing the great American Songbook or Broadway show tunes from the majority of talent that graces the small stage, all eyes were on Rita Wilson (singer, songwriter, actress and producer), a hotbed of pop-rock-country music who takes her lead from the likes of Joni Mitchell, Bonnie Raitt or Bob Dylan.

Perfectly dressed for the occasion in a mauve sleeveless pants outfit, scattered with tiny sparkles, and overlay jacket (which she very soon shed as the evening heated up), she delivered a night of her own songs, with the exception, at the beginning, of a few bars of Bobbie Gentry’s “Ode to Billie Joe” – and the mystifying jump off the Tallahatchie Bridge, and Jeannie C. Riley’s “Harper Valley P.T.A. . . . both of them leaving me wanting to hear more. Wilson’s self -penned songs (written with a variety of different collaborators) are filled with introspection and a quick message relaying who she is, how she thinks and what’s important to her. The tunes are sandwiched, at the beginning and end of her act, in “You’re The Music” (Mitch Allan, Kara DioGuardi, Kristian Bush, Liz Rose, MoZella, Rita Wilson) – the music that is therapy. There’s a “Song for Everyone” (Rita Wilson, Richard Marx, Trey Bruce) -writing and singing is her expression. Some are upbeat, some hot and several mixed with humor and pathos; like the story about the “New Girl” (Rita Wilson, Emily Shackelton) – sad reality of being replaced as a lover by another and yet another. After wildly tossing around that beautiful head of hair, she’s in a bar playing the shrink to any guy who comes her way and just wants someone to “Pay Me in Wine” (Kristian Bush, Kara DioGuardi, Liz Rose, MoZella, Mitchel Allen, Rita Wilson) – sassy and sexy!

She writes concisely, her messages are pointed and quickly conveyed. Having dealt with breast cancer not long ago, she has developed a mantra that has brought her and husband Tom Hanks (sitting nearby with Steven Spielberg) closer together: “Never go to bed angry, communicate, and don’t start a sentence with ‘no offense but . . .” She has learned to see the “Bigger Picture” (Rita Wilson, Annie Bosko, Danny Myrick).

Rita Wilson has a great sense of humor and writes and sings with her heart and soul. “Throw Me a Party”(Kristian Bush, Liz Rose, Rita Wilson) is a roadmap of how she wants to be celebrated: “When I’m gone, throw me a party . . . sing the songs . . . don’t be sad. . .” Song of resistance, “You’re Not the Boss of Me,” (Rita Wilson, Jeffrey Trott) rocked as an anti Harvey Weinstein message. She’s a rocker all right! And she sings with killer musician/vocalist Andrew Doolittle on acoustic and electric guitars, mandolin and ukulele as they duet and he provides backup vocals for the majority of the songs. Alex Navarro is on piano and keyboards, with Lee Nadel on bass and Brian Dunne on drums.

Her voice is raspy, smoky and after a post show discussion with the person I was with, we both agreed it’s got just the right sound for some good jazz tunes in the spirit of the Great American Songbook. Perhaps a future exploration for Ms. Wilson with Gershwin, Porter, Berlin, Rodgers & Hart?

What was distracting, however, was her constantly referring to the lyrics and patter on the music stand in front of her – maybe it was just opening night jitters and she needed the crutch.

Rita Wilson continues at the Café Carlyle thru October 21