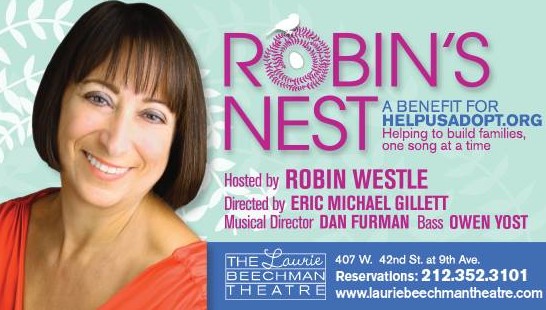 The seventh edition (in three years) of Robin’s Nest—a cabaret hosted by Robin Westle to benefit the work of helpusadopt.org —featured a slew of talented performers, many of whom have a connection to adoption. Most closely tied to this process were the duo of Stephen Mitchell Brown and Leah Jennings, who are in the midst of trying to adopt. This couple, each with a perfect Broadway-style voice, sang “It Takes Two” and “When The Children Are Asleep.” Many of the songs chosen for Robin’s Nest have a connection to the theme of adoption/parenting, and thus guest artist Valerie Lemon sang “A Mother’s Voice,” and with Eva Kantor (a new mother who also soloed on “Just Like That”) and Robin Westle, offered “Motherhood March,” which featured some delightfully rendered counterpoint. Sage Melcher, a Michael Feinstein Great American Songbook finalist, played and sang her own composition, “Dear Universe.” All were accompanied by music director Dan Furman, with Owen Yost on the bass guitar.

Two highlights of the evening were by Robin’s Nest director, Eric Michael Gillett and guest star Carole Demas. Both performers have been taken by songs of great meaning and poetic lyrics by contemporary songwriters. Both works are also thematically similar, about finding hope in the darkness. Gillett’s song (by Dar Williams), “After All,” perfectly suits his voice and style, and was powerfully sung. Demas was inspirational and absolutely stirring with “Advice to a Young Firefly,” written by Sam Carner and Derek Gregor, arranged by her long-time music director, Ian Herman. Herman accompanied Demas on two more songs, the seldom-heard but exquisite full version of “Over the Rainbow,” and “The Rose.” Both were delivered with the total commitment to feeling and emotion at which Demas is so good. Her youthful and flexible voice is always a treat to listen to. She never disappoints.

Congratulations go to Robin Westle for her generosity of spirit and for her commitment to producing quality cabaret. All proceeds of Robin’s Nest go to helpusadopt.org.