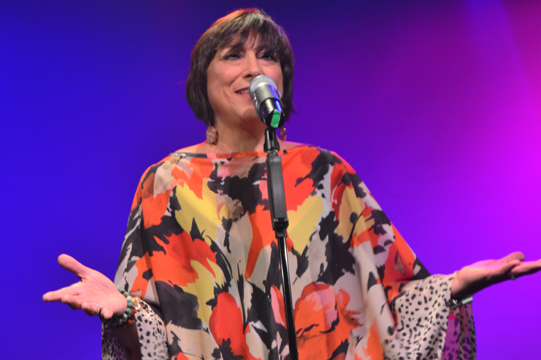 Robin Westle, speech pathologist, vocalist, and banner carrying adoptive parent, welcomes us to the 11th edition of Robin’s Nest, entertaining fundraisers for the estimable organization Help Us Adopt. As I wrote in an earlier article, Helpusadopt.org is the ONLY non-discrimina- tory adoption grant program in the country that aids prospective parents who are single, coupled, married, of any sexual orientation, race, or religion. Started on a shoestring, it has, since inception, funded two million dollars worth of adoptions making possible over 200 families: http://www.helpusadopt.org/

This most recent event featured both vocal performers and a multiple award winning film featuring adoption. We began with stalwart Help Us Adopt supporter Eric Michael Gillett who relates an anecdote wherein he tries to remove make-up jowls and discovers they are, in fact, his own. The incident provoked Gillett to withdraw from performing for a time believing, as a so-called friend commented, his time had passed and he perhaps “had nothing to say.” Fortunately for us, he’s back with renewed vigor.

Chosen for timely reasons, Gillett sings “I Was Here” (Stephen Flaherty and Lynn Ahrens from The Glorious Ones)- a song about passion for and commitment to his art, “Stop This Train” (John Mayer)- once scared of getting older, perspective on the inexorable, and Dar Williams’ “After All”: …when you live in a world/Well it gets in to who you thought you’d be/And now I laugh at how the world changed me/I think life chose me/After all…a hopefully optimistic contract with the next chapter. Actor and storyteller, the artist imbues each lyric with personal feeling viscerally shared in fine voice. We then hear two numbers from rising actor/vocalist Isaiah Feil-Sharp who is himself the adopted son of two proud fathers. Sharp offers a rendition of “Luck Be a Lady” (Frank Loesser from Guys and Dolls) into which he hasn’t quite grown and a thoroughly appealing “Last One Picked” (Dick Gallagher/Mark Waldrop) about the kid always left behind he seems to veritably inhabit.

Our hostess, Robin Westle closes the musical section of the program with her wry, signature “Ring Them Bells” (John Kander and Fred Ebb) and a lovely version of Phil Collins’ “You’ll Be in My Heart”… I will protect you/From all around you/I will be here…signifying sincere feelings about helping those children who are alone in the world. The second half of the evening features The David Dance, a multiple award winning film by Actor/Writer/Producer -Filmmaker Don Scimé that began as a Fringe Festival play by its author. Though it seems so real one might imagine reenactment of actual events, it is, in fact, greatly imagined.

In Scimé’s own words “Some years ago my sister who was considering an adoption and was single asked me if I would be interested in helping her by sort of being a father figure to the child. Although the actual events of the film are mostly fictional, it’s about my own personal struggle with self esteem. The David character in the film doesn’t actually feel worthy of adopting because he is gay. A lot of the LGBT films you see are often films about very young people coming out for the first time. I felt very strongly about writing about an adult gay character who was already very openly out to his family and friends (and to even the public with his radio persona as “Danger Dave”) and yet still struggled with some of the subtle self esteem issues that often come with internalized homophobia.”

Like many outsiders, David has grown up surrounded by bigoted mentality and the cruelty of his peers. His bond with ever-supportive, older sister Kate acts as lifeline. Viscerally shy unless on the air “…I have to be a different person, not just me anymore…someone might be listening…,” David feels undeserving and wary of any relationship. The evolution of unexpected love in all its stop/start truth, is very affecting.

When prejudice rears its ugly head on radio air and David springs out of insecurity to retaliate, our audience vocally reacts. When tragedy occurs, one can hear it collectively gasp. During the beautifully manifest denouement, there are sniffles.

The film is honest, funny, painful, outraged, tender and deeply touching. An excellent cast features the wonderfully subtle Guy Adkins as David’s often hard-pressed lover Chris, a pithy Antoinette LaVecchia as his doggedly independent and protective sister Kate, and Jordan Baker as radio conservative June who deplorably declares “God can grant you the strength to make you straight or at least help you be celibate” with chilling conviction. Scimé himself is as if naked on screen for most of this film. The veracity of his performance echoes.

Director Aprill Winney makes what I gather was executed on a shoestring look uncompromising. Wrenching emotion is as intimate as the smallest moments: a cat, Chris’s hand on David’s back during a first dance, Kate’s wedding photo with her groom’s face blacked out…Denizens of Buffalo, New York are somehow familiar. Humor is understated while on target. That which moves is both given time to breathe and never overplayed.

My single objection concerns a section where David and Kate are alternately played as children by Scimé and LaVecchia and by child actors. The back and forth is disjointed and confusing.

‘So very worth seeing for both artistic and message reasons. http://www.thedaviddance.com/