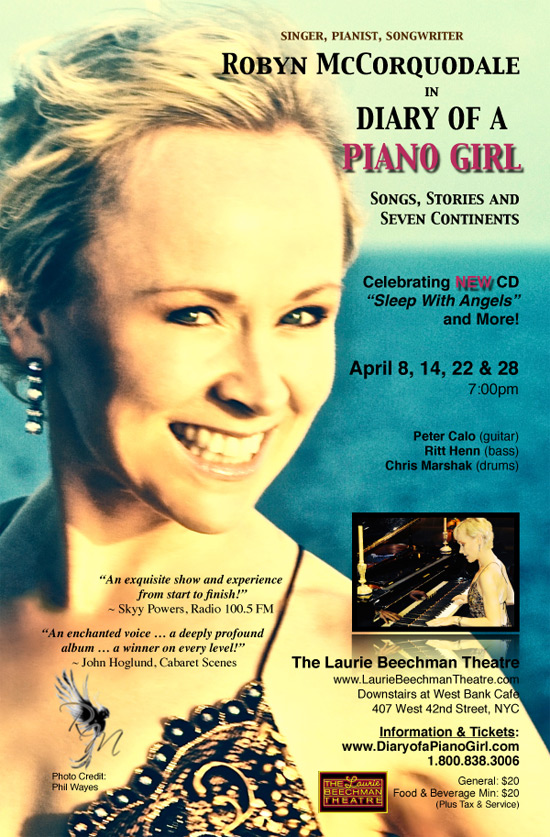 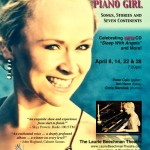 There’s the “then” of cabaret, and there’s the “now.” The “then” centers on the Great American Songbook, the work of such writers as Berlin, Porter, Rodgers and Hart, Arlen and Harburg, Weill and so many others. The ”now” writers are rarer: people exploring the mysteries and joys, the dreams and potentials, of life and love today. Among them: the sparkling Robyn McCorquodale, singer, pianist, songwriter and, for more than two decades, a shipboard entertainer traveling the world.

This April, Robyn brought her music and tales of her journeys throughout seven continents into New York, to the Laurie Beechman Theatre. Singing her own songs from the piano, and backed by three of the city’s top musicians – Peter Calo on guitar, Ritt Henn on bass, and Chris Marshak on drums – Robyn winningly recounted her adventures in harems, on the sea and on the ships. Her songs, created in a variety of styles, spoke of life in its broadest sense, with such titles as “Breathing Free,” “Dance in the Sun,” “Sleep With Angels,” “Destiny” and “Take My Hand” – songs that spoke in positive style of the richness and potentials of the world around us.

Accompanying a number of Robyn’s songs were stunning large-screen motion pictures of the vistas she witnessed – films that Robyn herself shot.

Even Robyn’s finale – her only standard of the evening –was an affirmation of her can-do approach to life. “Over the Rainbow” has been sung over the years with a wistful, yearning ending: “If happy little bluebirds fly beyond the rainbow, why, oh why can’t I?” In Robyn’s singing, the line becomes an affirmation of purpose: “Why, oh, why can’t I???” When it comes to the combination of entertaining and inspiring, Robyn can – and does.