Rockabilly Christmas! Sure Fire Way to Liven Up the Holidays 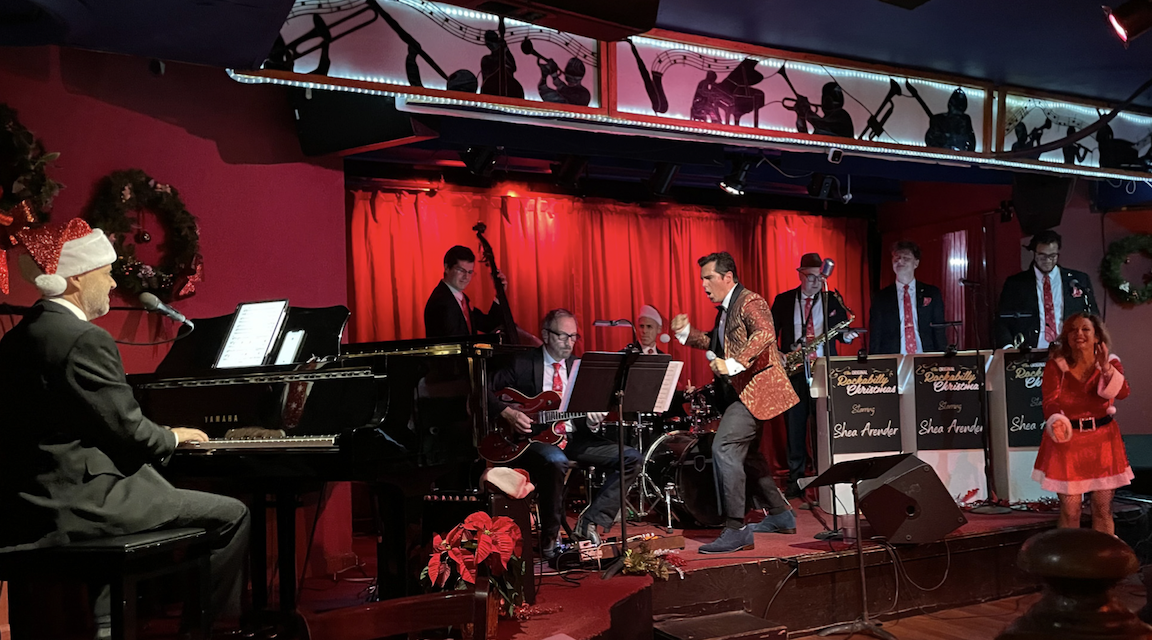 Shea Arender is the key to a hot swingin’ holiday line-up of entertainment at Swing 46 for the next three weeks here in New York City. Like he says “I’m not an impersonator” – – but I can tell you that Shea sounds and gyrates to the same calling as the great Elvis (yes that Elvis ‘King of Rock n’ Roll’). Shea is one unique entertainer with a line of credits that include producer, vocalist and songwriter for the American Symphony in Las Vegas, as well as Broadway producer and so much more.

From songs written or recorded by the The King –  “Hound Dog” to “Blue Suede Shoes”, “That’s Alright Mama”, “Great Balls of Fire “, “Whole Lotta Shakin’ Goin’ On”, I’ll Be Home for Christmas”, Blue Christmas”, “Winter Wonderland”, “Let It Snow” and so much more, Shea and his fine 10-piece band of top notch musicians, headed up by musical director/pianist Robert Cookman, will have you dancing in your seat until you can’t bare it anymore and have no choice but to get up on the dance floor (where most of the audience was) the evening I attended. Alongside Shea are two added attractions, Sarah Hayes who’s got some real shtick going with “Santa Baby” and sidekick Jade Litaker with a fun rendition of “Is That You Santa Claus”.

Wrap this up with a fantastic dinner package as part of the evening and you’ll be happy as a puddin’ pie.

Part of Shea Arender’s appeal, aside from his glorious voice, is his good looks and undeniable charm, along with the hi-energy moves that will leave you gaga! The show is a compilation of Rockabilly and Swing, also filled with historical data about Rockabilly that began in the 1950s – a blending of country and R & B coming out of Sun Records in Memphis, Tenn.

Shea’s numerous talents include his producing Harold Arlen’s Broadway Estate musical “The Wonderful Wizard of Song” (2 ½ year off Broadway run + one year touring) of the songwriter’s exceptional 550 song catalog, one of the largest in American musical history.