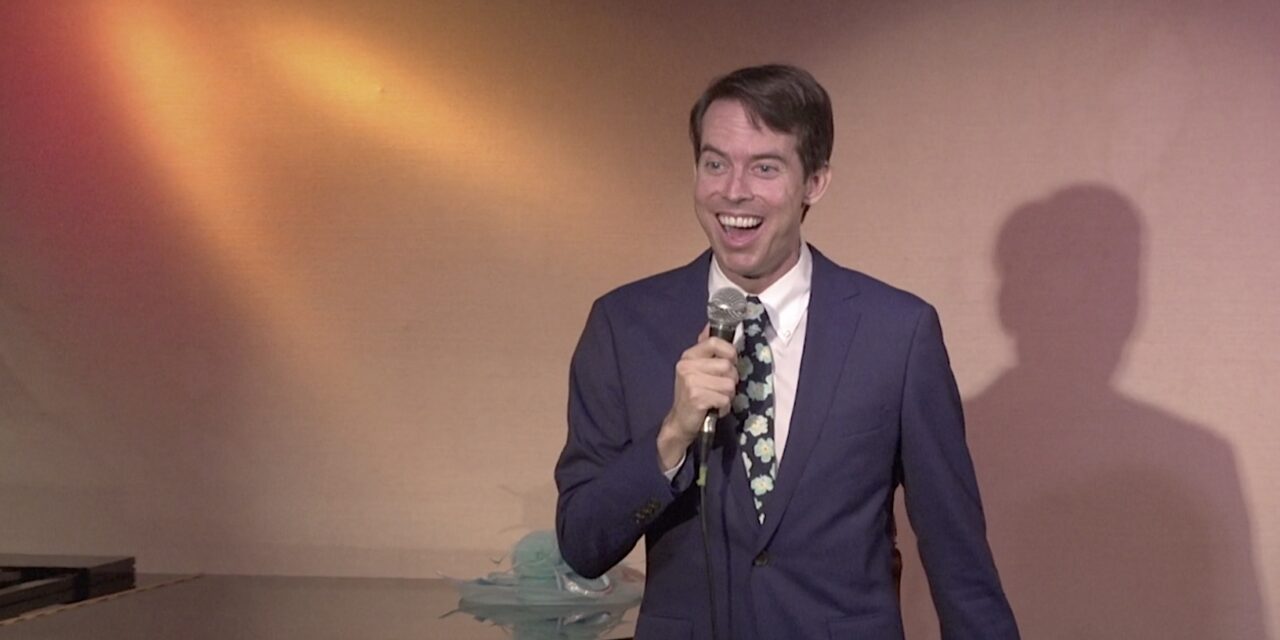 Roderick Ferguson is one funny cat.  An actor with the comic timing of a standup comedian, with sharply written dialogue, Ferguson made his major New York cabaret debut at Don’t Tell Mama with Man Overboard!!!, which first ran at CabaretFest in Provincetown in June 2021.  He managed to make his life story – that of a closeted gay kid from Bermuda coming out in dramatic fashion, defining his own gay lifestyle, and eventually fighting the Bermudan government in an epic LGBTQ rights battle —  at once hysterically funny, moving and poignant.

Ferguson welcomed the sold-out crowd “back to Don’t Tell Mama (on Nov. 4th) where my career began … three minutes ago.”  His opening monologue was filled with very funny references to growing up gay.  Ferguson managed to find humor in even his greatest life challenges and disappointments.  Obsessed with Monarch butterflies since one landed on his forehead as a child, “proving that nature makes you gay,” his long essay about the butterfly served to set up material and callbacks later in the show.  Ferguson managed to make even a woefully unsuccessful suicide attempt – with Tylenol – into comedy gold.  A cognitive behavioral therapist told the then-virginal Ferguson, “If you’re going to kill yourself over being gay, why not at least try it first?”

Ferguson’s strongest suits are his comic timing and material, and an exceptional ability to engage an audience.  He is, frankly, not a great singer.  Still, he sings in tune with great enthusiasm, and well enough for a comedic cabaret show.  Think “Felix Unger” singing “Happy, and Peppy, and Bursting with Love,” and you’ll get the idea.  Ferguson’s appealing presence brought to mind Kenneth Parcell’s “Jack McBrayer” character from “30 Rock,” down to the blue suit.  His song choices were exceptionally well-fitted to his monologue pieces, and were wonderfully accompanied by pianist Michael McAssey.  Not too many performers could pull off a song first sung by “Ernie” on “Sesame Street,” but Ferguson’s sweet, earnest delivery of “I Don’t Want to Live on the Moon” (Jeff Moss) was terrific.

His titular story about his dad and being a “man overboard” led to a medley with superb choices about sanity, including “Goin’ Outta My Head” (Teddy Randazzo/Bobby Weinstein), “Twisted” (Wardell Gray/Annie Ross), “Crazy” (Willie Nelson), and “You Could Drive a Person Crazy” (Stephen Sondheim). These kinds of choices, along with Ferguson’s delivery, helped him move the narrative greatly.

Ferguson grew up in Bermuda, as mentioned, and became the plaintiff back in 2018 in a groundbreaking lawsuit fighting for the right of gays to marry there, despite his living in the United States and not being romantically involved with anyone.  His challenging relationship with his mother was fodder for much material in the show, particularly the lawsuit.  When the news came in that the ban on gay marriage was lifted, he told us, “I wanted to shout for joy…. but I was in the quiet car!” (There was one final appeal by Bermuda in February 2021, and a decision is still pending.)  Ferguson noted that his father went largely unmentioned in the show.  With impeccable timing, he explained, “But that’s because he financed it!”, to much laughter.

Both of Ferguson’s shows this weekend were sold out – an impressive start.  There is a good possibility the show will be extended.  There is no doubt he could fill the bigger room at Don’t Tell Mama.  You don’t want to miss him.

Written and performed by Roderick Ferguson